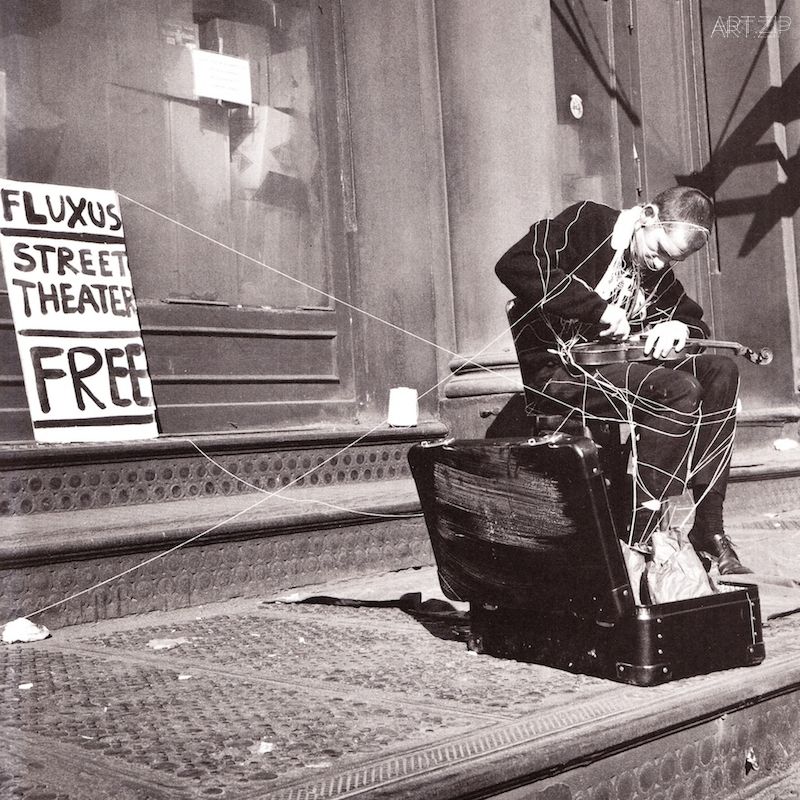 Compared with the well-known Dadaism, Futurism, Surrealism – the art movement Fluxus, as obscure as it was, probably owns its fame chiefly to Joseph Beuys.

In the previous decades, the definition of the Fluxus was already difficult enough a problem for the followers and the historians. And, time only proves that all efforts have been in vain. There are at least four reasons for this: firstly, Fluxus is not an organization. Besides the fact that those affiliated with the movement were scattered around the globe, they were also not interested in the idea of having a clearly structured organization. Secondly, there was no single manifesto – there was at least five. George Maciunas, recognized as the founder of the Fluxus movement, presented at least five manifestos from 1961 to 1966, but everybody else were not satisfied and had reservations. There was no unified style – this is rather easy to understand, as one of its slogans was “freedom、personality、experimentalism”. Lastly, Fluxus in this way inherited and refreshed the essence of pre-war Avant-garde – anti-art,anti-art sensibility,anti-establishment, anti-commercialism,anti-institutional. No wonder really, it is really hard to start a conversation about it today.

In this way, it also renders arguments about it rather meaningless. As Robert Watts has it:“The best thing about Fluxus is that nobody knows what it is.”Perhaps undefinability is one of its biggest feats.

The Strange Origin of the Fluxus

The term fluxus finds its root in Latin: flow, flux, flowing, fluid. Fluxus as it is known today was first used as the title of a cultural magazine, published by Maciunas and friends in New York in 1960. Due to differences in political views among the publishers they stopped the magazine. After this, Maciunas’ AG Gallery had only a very short life as well. Fleeing from his debts, Maciunas went back to the continent in 1961. Inspired by the new atmosphere of the art scene there Maciunas wanted to pick up again the magazine business. In the year of 1962, Maciunas produced a music festival under the same name as a fundraising and promotion event for the magazine that was to come.

A certain Fluxus spirit was present as early as in the 60s – artists and intellectuals scattered around the world were unconsciously or rather aimlessly creating works or experimenting by themselves, discontinuously. The most influential one among them was of course the great John Cage and his Experimental Composition course, who exerted immense influences on Dick Higgins, George Brecht, Al Hansen among many others. Only when the Fluxus music festival took place did the members realized that they were not alone and were in fact practicing in the spirit of Fluxus.Since then, they become known as the Fluxus-people, and started working actively in the art world.

With the first music festival undergoing in 1962, the founder Maciunas, without knowing clearly what could define the Fluxus, claimed: “Let’s Fluxus！” Artists following this rather absurd figure started a series of eccentric, unconventional acts, known also as the Neo-Dada.

Monumental Event as the Biggest Scandal?

In 1962, the four-weeks long The Fluxus International Festival of Very New Music took place in the Wiesbaden Museum. This was the grand opening of the Fluxus, but it already irritated a number of artists and medias because it was prepared only in a short time and was not well-organized. But the biggest scandal was Philip Corner’s Piano Activities（1962）. Corner was not there, to be sure; Maciunas and three other artists, furious about the financial shortage, abused the grand piano with equipments and tools found on-site. They did not stop the impossible improvisation until the piano was shattered to pieces. This event was considered by the German as a violence against the favourite instrument of Chopin, and immensely agitated the audience.

The impact of the event was, however, surprisingly phenomenal. This music festival kicked off the whole traditional event, and brought New Music to its height. Through activities as such Fluxus promptly spread in the whole of Europe.

Fluxus is not: a movement, a moment in history, an organization. Fluxus is: an idea, a kind of work, a tendency, a way of life, a changing set of people who do Fluxworks.–Dick Higgins

Robert Watts said that there were Fluxus wherever he went, whatever he saw. Fluxus was like a web, connecting all – painters, sculptors, musicians, authors, architects – a great number of them fell in voluntarily, but a greater number of them oscillated in and out.

“Anything can be art and anyone can do it”—George Maciunas

Fluxus blurred the boundary between life and art, and that between the artist and the spectator. Regarding artistic creation, Fluxus encouraged simplicity, humor, anti-mannerism, focused on the work itself, and did not care for techniques and unlimited associations. This fundamentally freed art from its pedestal and encouraged participation of all.

George Maciunas was considered the founder of the Fluxus. He also opened the Fluxus shop through which art became subject to massive productions, and was no longer a toy of the upper class.

John Cage was an influential experimental musician, and was considered the father of the Fluxus. Experimental music broke all set limits, with the 4’33”（1952） as its example par excellence. The performance of 4’33” did not involve a single note, and the audience has to feel four and half minutes of silence in which his/her own sound and the environment are brought to the foreground. Cage’s philosophy had it that the nature of music is not performance but the act of listening.

George Brecht was an American conceptual artist, composer and chemist. He invented the Event Score and started spreading art in the form of mail art.

Marcel Duchamp was also considered a Fluxus-people. As an avant-garde artist, his Boîte-en-valise (1935-41) gave birth to another art form of Fluxus: Fluxbox. Fluxbox and Event Score were the two most popular form of Fluxus art.

Dick Higgins came up with the term Intermediate Art. In the spirit of the Fluxus, Higgins promoted the idea of an art form that breaks the boundary between music, performance, visual art, and literature. 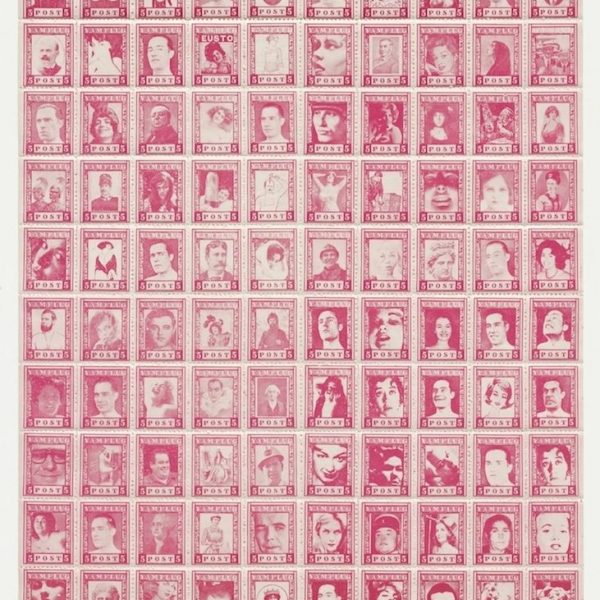 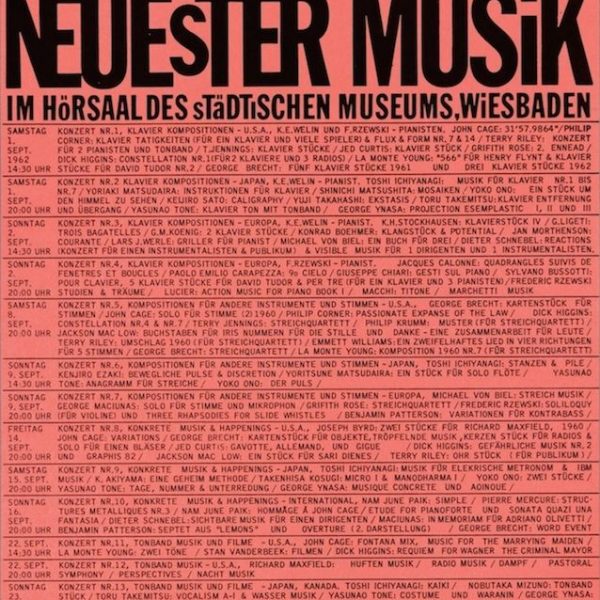 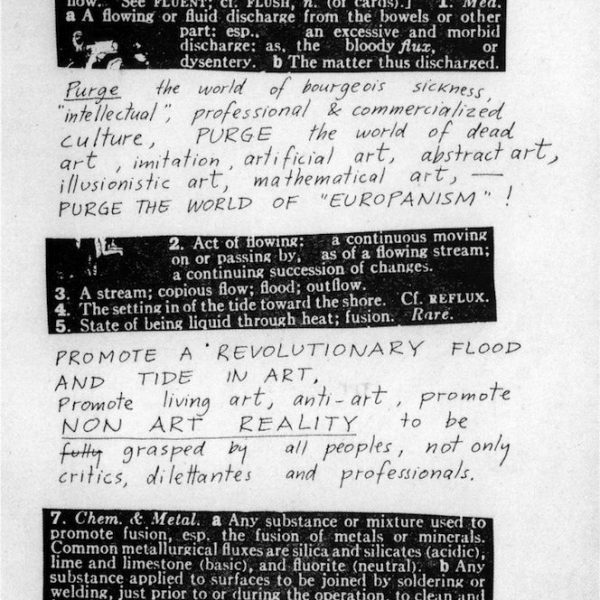 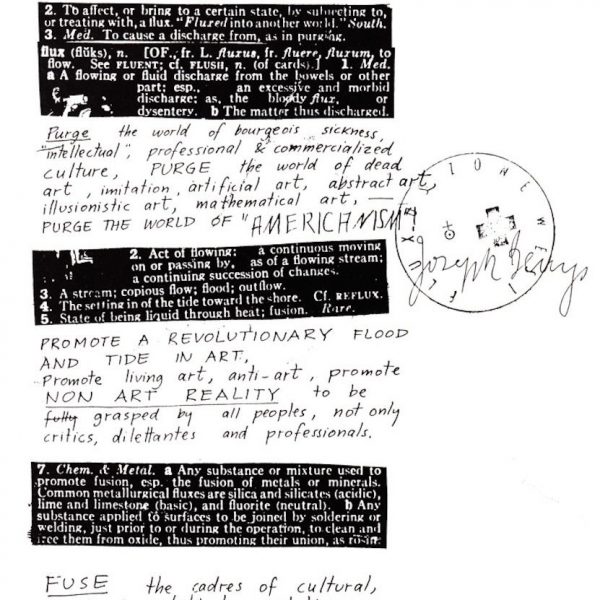 A Cat and Mouse Game?

Thanks to its denial of traditional institutions, this avant-garde, revolutionary movement of art started in the 1960s has always been on the border between the mainstream and its outside. Firstly, in its attitude, it despised the high art – Maciunas argued for the non-commercialization of art in his manifestos. Secondly, Fluxus art was chiefly in the form of performance, sketching or readymade, and was therefore in fact not of inherent commercial value then. The early Fluxus artworks were mostly anonymous or very much private; only a handful of collectors devoted their time and money to support this unlikely art movement.

Beuys was not very much directly involved in the formation of the Fluxus. Shared with the major Fluxus movement the slogan “Everyone is an artist”, Fluxus was fighting against art, against institutions, while Beuys infiltrated deep into the system. Without Beuys, Fluxus perhaps would not be as influential a strange movement of art.

As the Fluxus was becoming evermore powerful, an irreconcilable break happened from the inside. The Fluxus had secured its position in history, but, ironically, for the safe placement of the art and its exhibitions, they had to come back to institutions and to observe the rules. After five decades, though the movement has yet completely fulfil its original goal, its spirit still drives and inspires the younger generations. 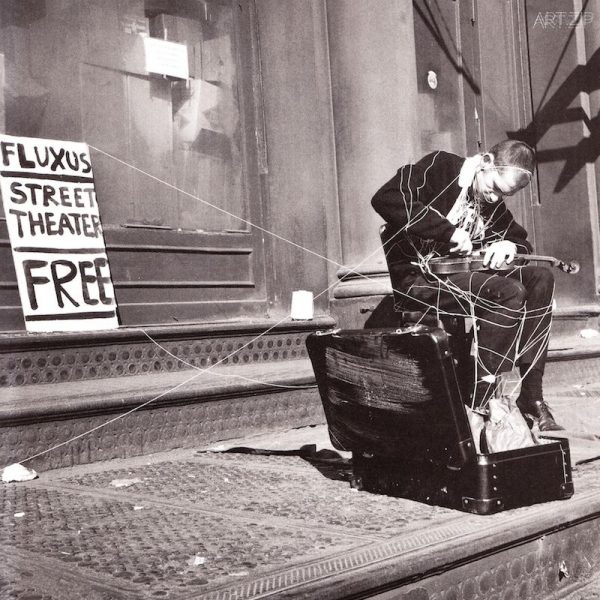 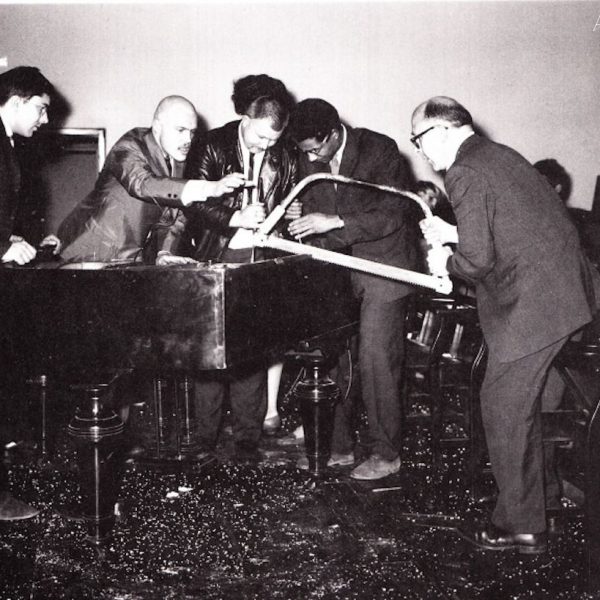 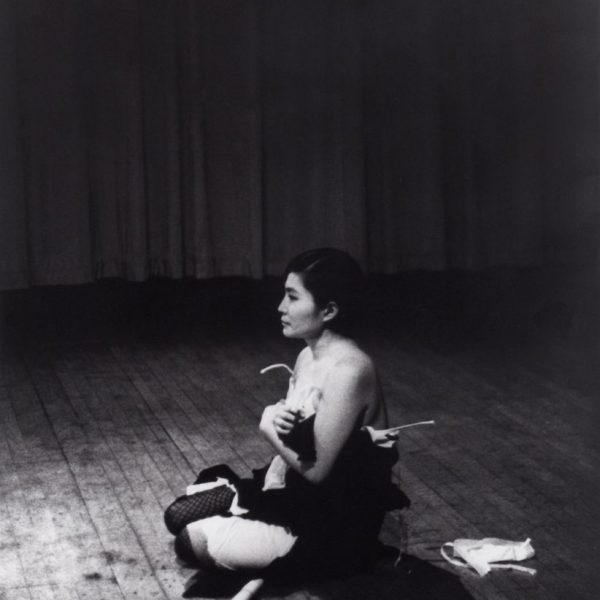 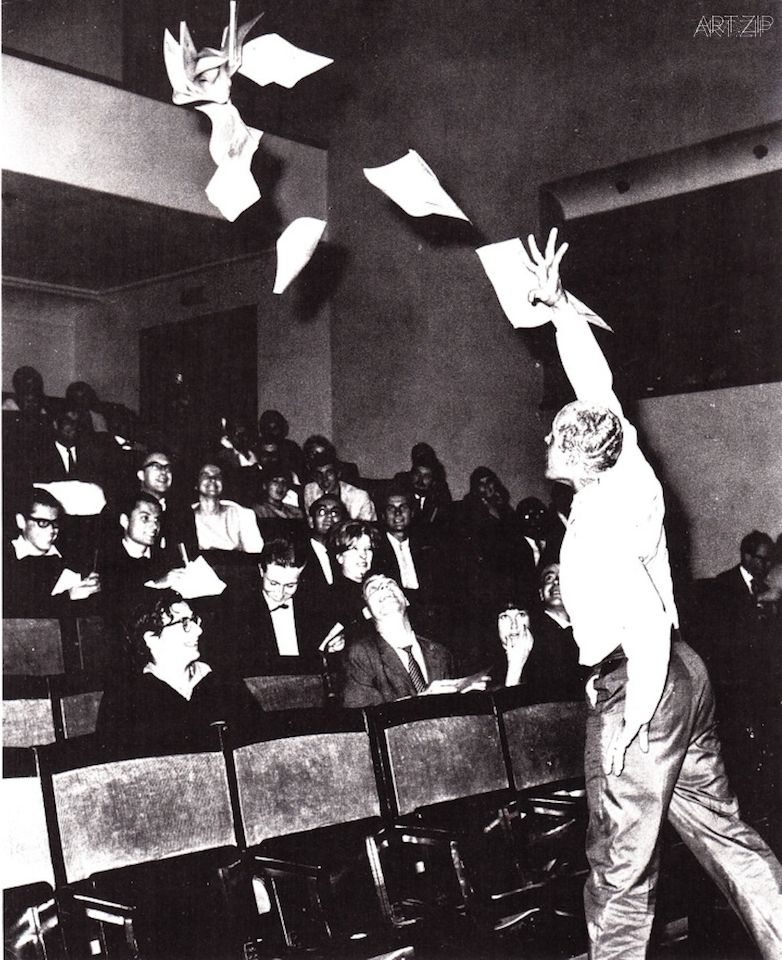