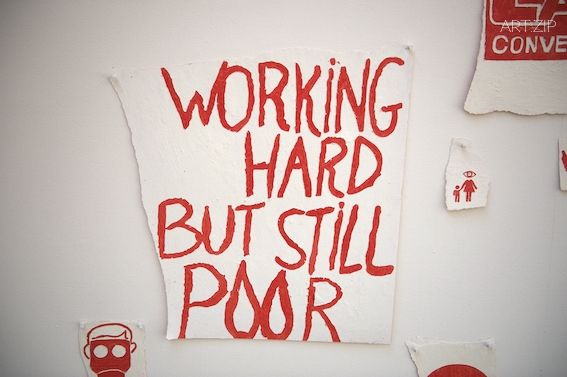 Thomas Dane Gallery is pleased to present ‘Breaking News’
an exhibition of drawings by Michael Landy, taking place in his Studio

The hundreds of red and white drawings on torn paper that line the walls of the studio are an assortment of signs and symbols, steeped in references. Picking out the various slogans and familiar sayings gives the viewer a feeling similar to reminiscing or glancing through newspaper headlines.

For this second showing of ‘Breaking News’, the first being held last May at Sabine Knust Gallery in Munich, the work has evolved and recurrent themes become even more pronounced. References to British politics feature heavily, and familiar threads can be traced through from Landy’s earlier works. 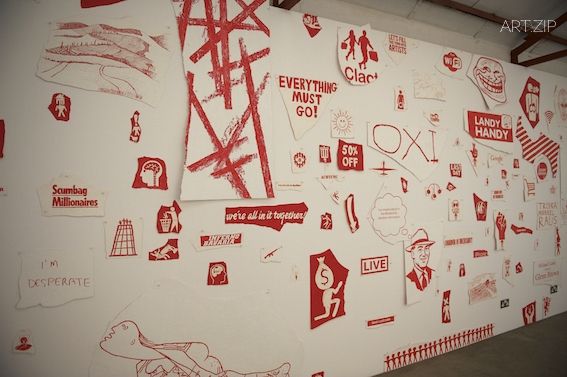 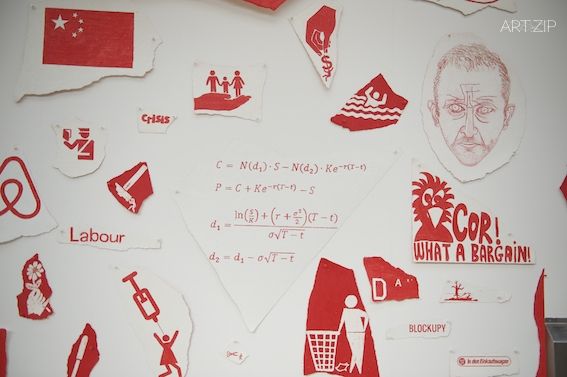 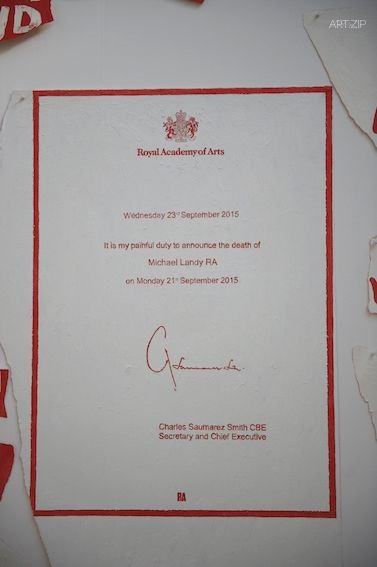 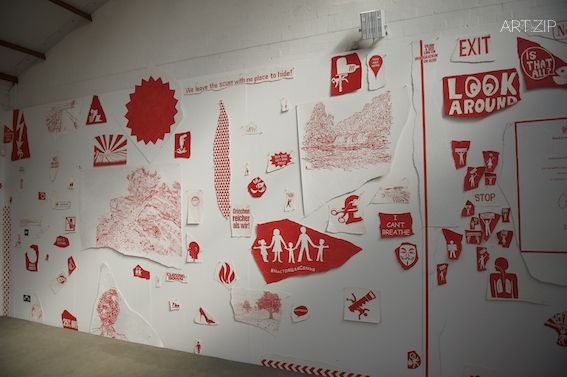 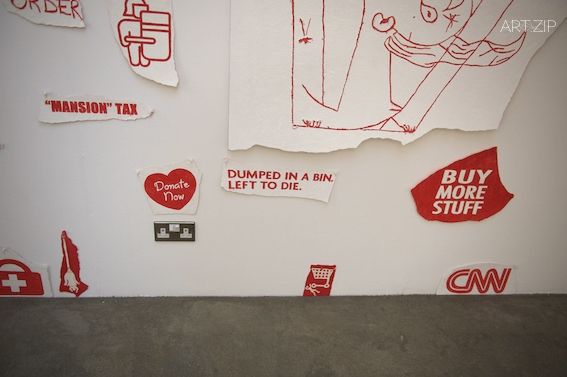 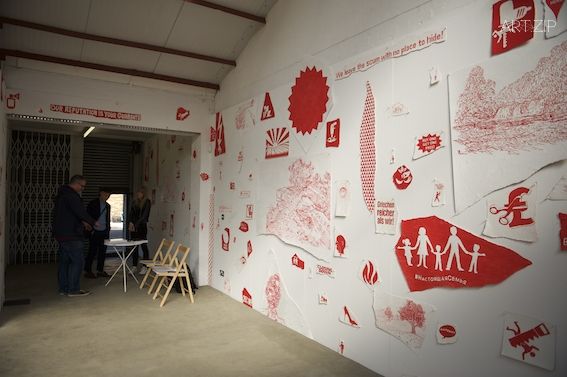 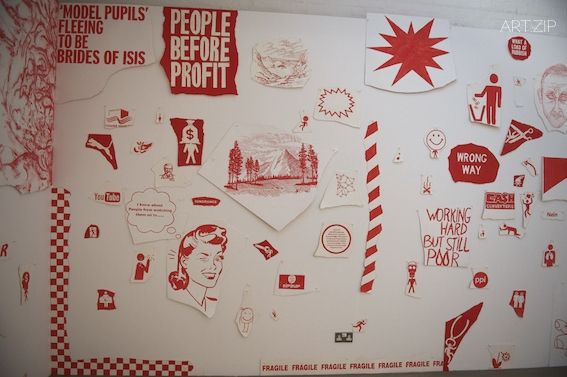 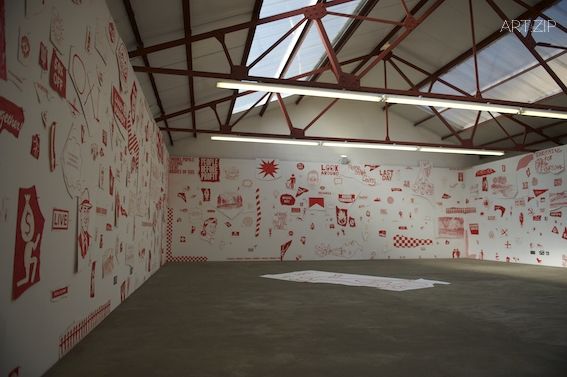 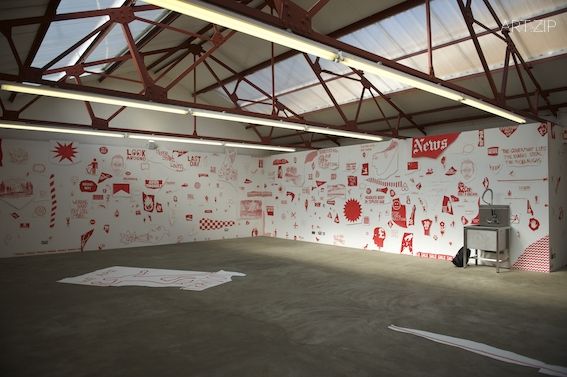 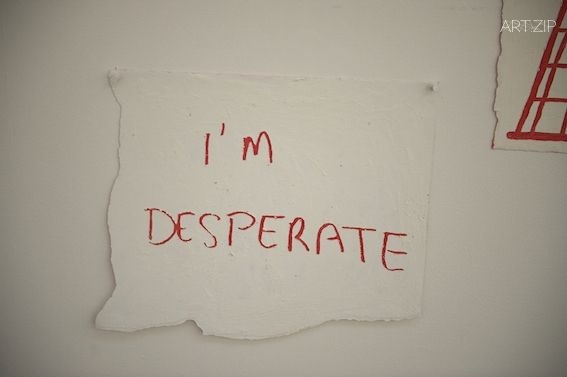 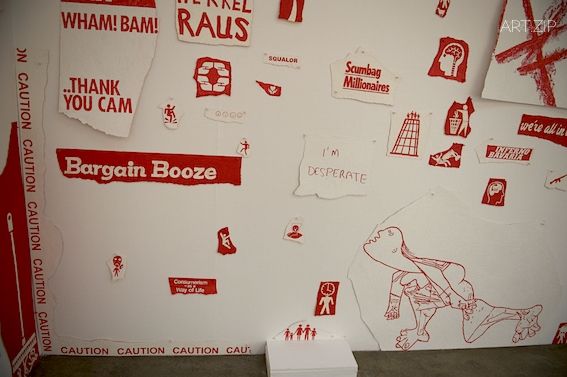 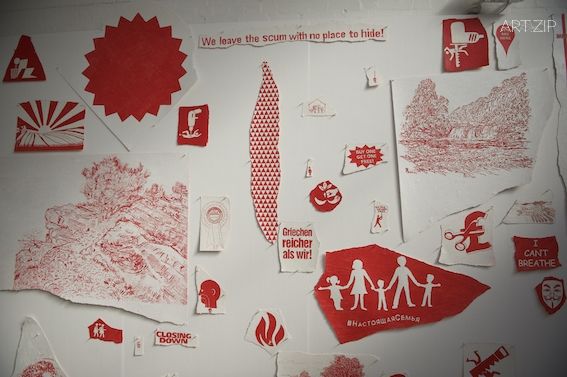 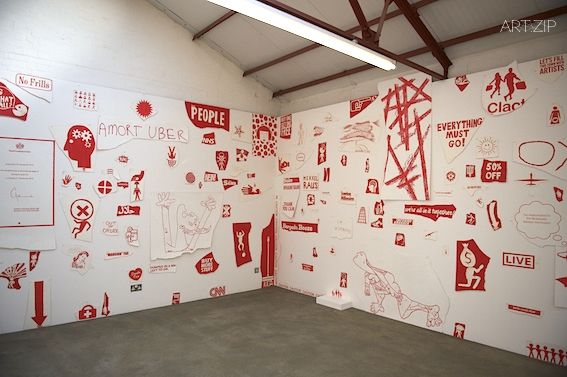 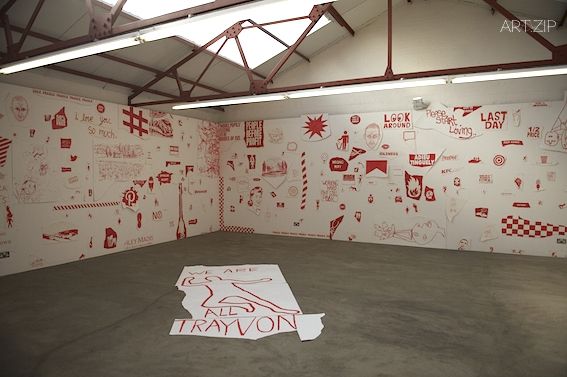 A conversation between Michael Landy and François Chantala

FC: The realm of ‘Breaking News’ is uniformly red and white, somehow clinical, and really quite striking visually.

ML: Yes, it is all . It is so many things: the colours of Warning signs, of Arsenal Football Club, of big brands like Marlboro or Coca-Cola. It catches the eye. So I thought I would use that and that I would take possession of all my subject matters by turning them into Red and White motifs. I have used it before, in ‘Scrapheap Services’ for example, in 1995. But with ‘Breaking News’, I am really going back even further, in 1992, and a piece I made at City Racing, called ‘Run for Your Life’, where I literally drew onto the walls with felt-tip pen a world of little figures, little imaginary people in distress, being torn into pieces. It was very much of its time of course, talking about factories closing down, etc…, so I wanted to do an updated version.

FC: When we look around, all these fragments of torn paper, pinned directly onto the walls, seem disconnected – almost a cacophonic collage. There are all sorts of things, scraps from art history – Picasso, Ruscha, Warhol… – but also bits from the news, aphorisms, pretty, idyllic landscapes, and quotes from your past works as well.

ML: It is what is happening now, what you would have read in the news a few days ago, but it also borrows from twenty-five years of my career. It is in a way at the same time self-introspection and open-endedness. And all these references intermingle. I thought for example that Picasso’s ‘Guernica’ had resonance in today’s crisis, and it can coexist on the wall with the Ashley Madison’s ‘have an affair’ logo, a fragment from Richard Hamilton’s painting of Bobby Sands or a headline about Jeremy Corbyn. It’s a combination of disparate elements in the world and the red and white connects them and you also begin to see connections between things.

FC: It seems there is a strong, clear intent, at the start, but that it also drifts freely, almost unconsciously. You are building a narrative, but subject matters also come to you.

ML: It is exactly like browsing the Internet. In a kind of day-dreaming fashion. Some source-material I really do search out, and other things just come to hand in a sense. Most of what I do has always been socially or politically related and here it has also morphed into art-related subjects.

FC: Throughout your career, you seem to have always embraced that slightly obsessive and yet perfectly pragmatic idea of fully completing a project or an idea until its exhaustion. And yours.

ML: Yes, like in my ‘Nourishment’ etchings series, or like in my ‘Portraits’ series. I like to fill-in a space, or a piece of paper. To it limits. This one is even more physical in a way, more tangible: in this installation you are literally walking in one of my drawings.

FC: And we are walking in your studio as well. This is where the exhibition is happening. And it is the second time these are going to be seen, the first one in Munich a few months ago.

ML: Yes, there it brought together references to Britain and Germany. There was a lot from the debate in tabloids at that time about Greece and Germany, about austerity cut-backs. And even though some works from Munich will make their way back here, the focus shifts slightly to Britain again, and what’s current. It’s consistent but it’s also a snapshot.

Michael Landy was born in 1963 in London, where he continues to live and work. He studied at Goldsmiths and while there he exhibited in the now historic Freeze exhibition. Throughout his practice the artist has created epic installations and performances to explore political and social issues. His 2001 monumental commission for Artangel, Break Down, was a systematic destruction of his 7,227 possessions in a former department store in London. Recent solo exhibitions include Saints Alive, originally at the National Gallery, London and then travelled to Antiguo Colegio de San Ildefonso, Mexico City in 2014. Landy was elected as a Royal Academician in May 2008 and Four Walls at Whitworth Art Gallery, Manchester. Michael Landy’s works are held in many public institutions including the Tate Collection, London; the Arts Council England; and the Museum of Modern Art, New York.