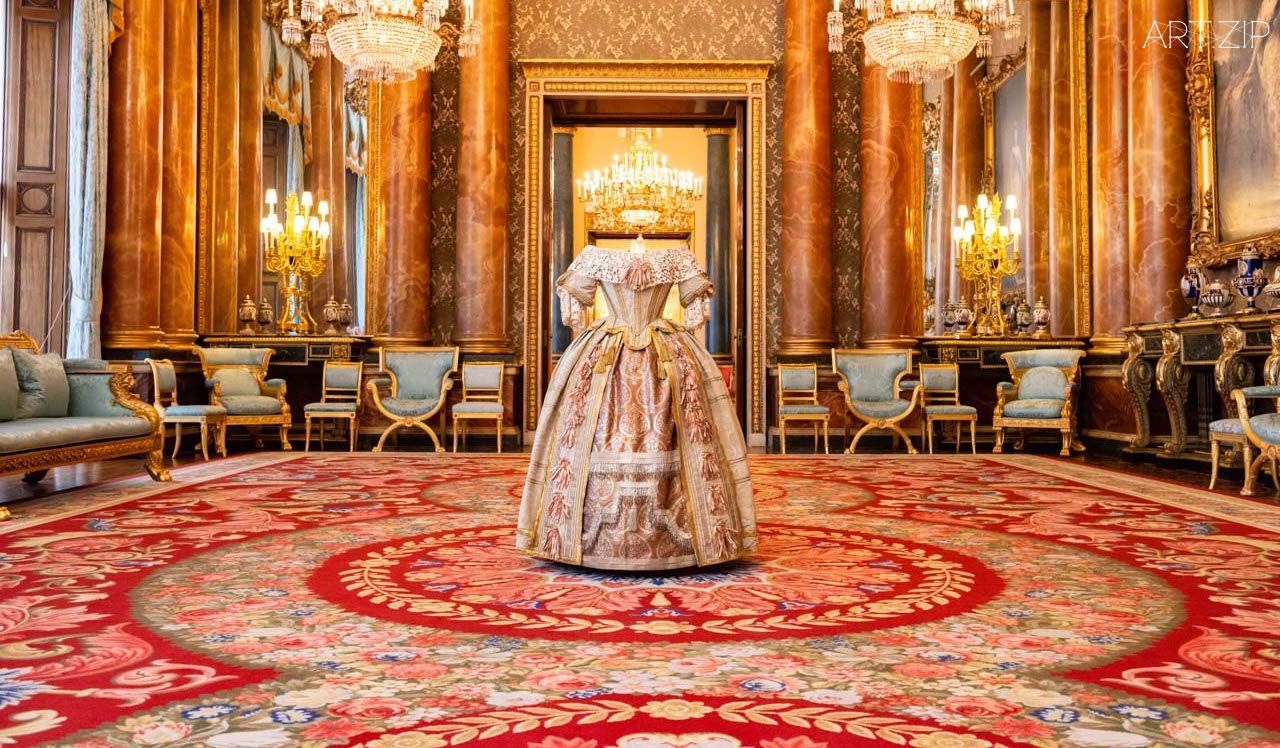 The music, dancing and entertaining that characterised the early part of Queen Victoria’s reign will be recreated through special effects and displays throughout the State Rooms at this year’s Summer Opening of Buckingham Palace from Saturday, 20 July. 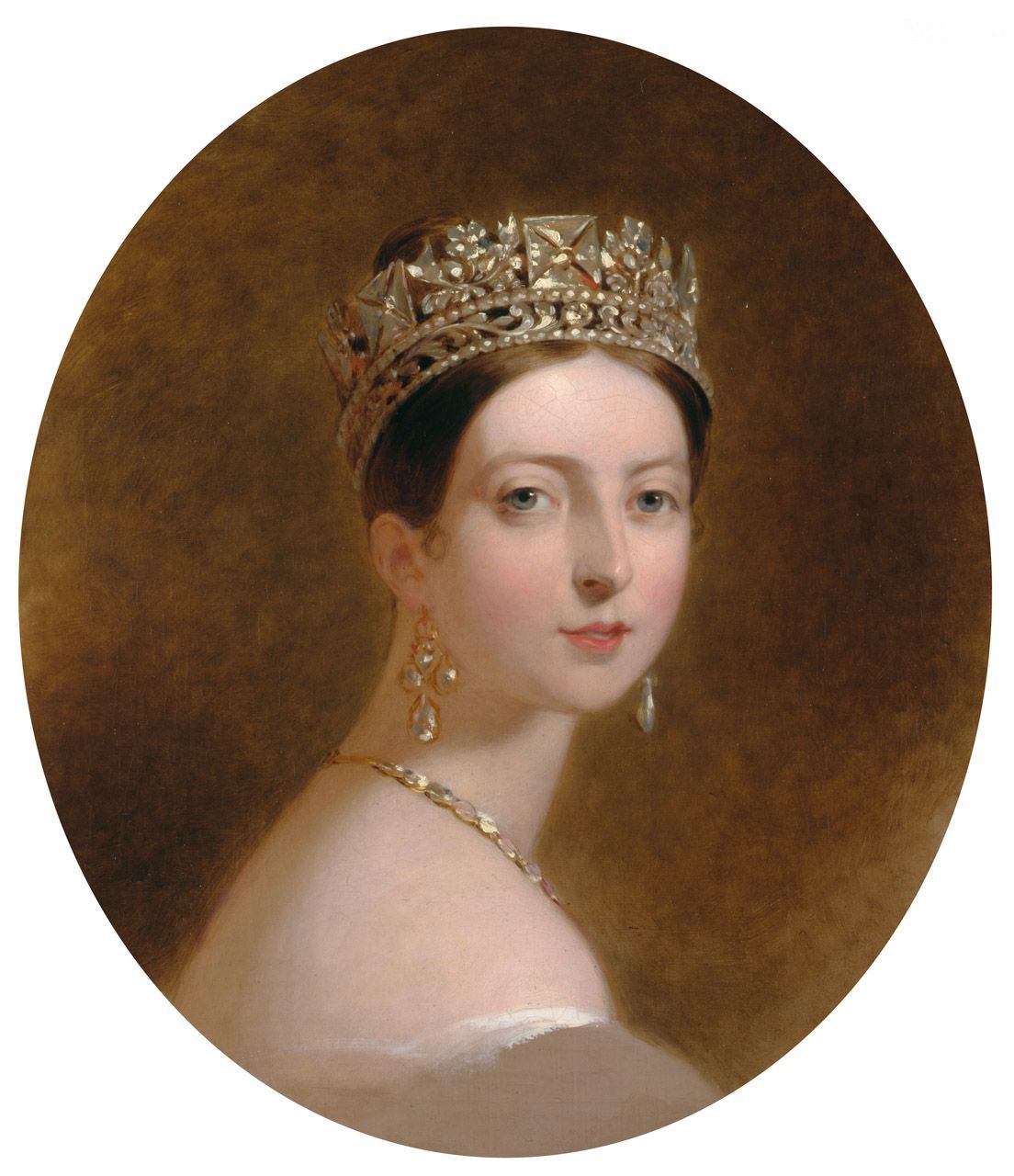 To mark the 200th anniversary of the birth of Queen Victoria (1819–1901), the exhibition Queen Victoria’s Palace tells the story of how the young monarch brought the Palace to life, transforming an empty royal residence into the most glittering court in Europe.

Queen Victoria ascended the throne on 20 June 1837, aged 18.  She moved into Buckingham Palace within three weeks, becoming the first monarch to use it as an official royal residence.  A year later, Victoria was also the first to process from the Palace to her Coronation at Westminster Abbey on 28 June 1838.  Before sitting in the Coronation Chair to receive the orb, sceptre and ring, the symbols of royal authority, she was dressed in the supertunica, an embroidered robe made from cloth of gold.  Victoria later recorded in her Journal that she would remember the day ‘as the proudest of my life’. 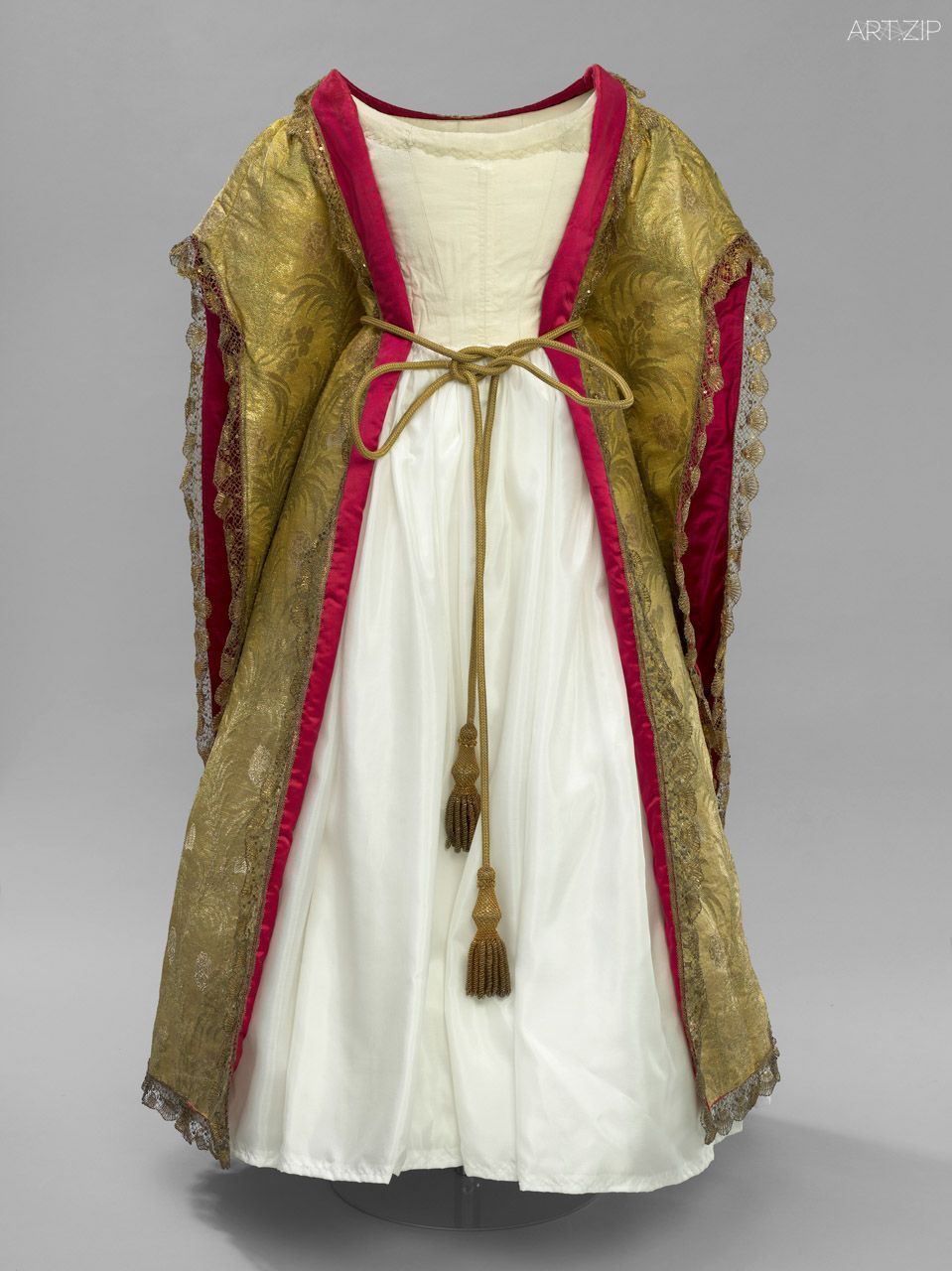 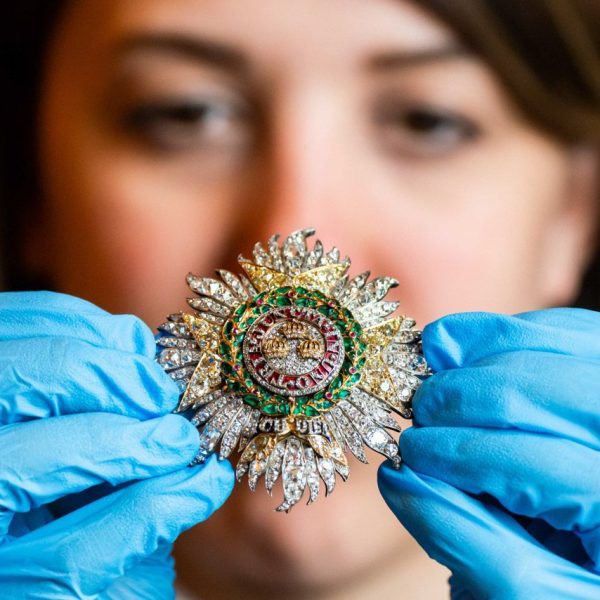 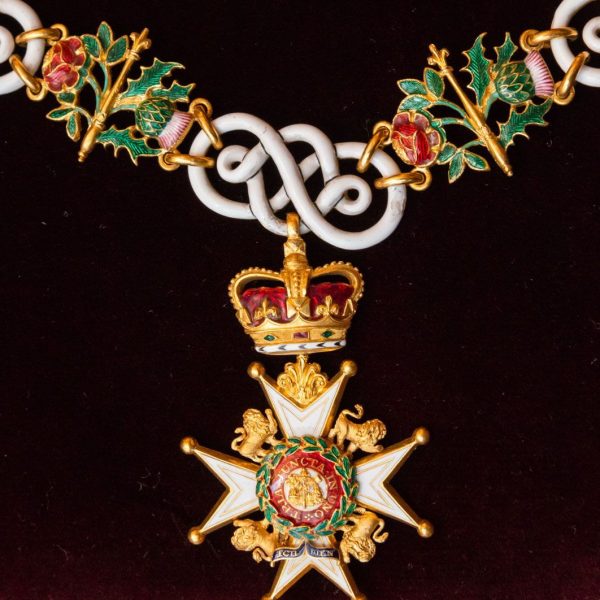 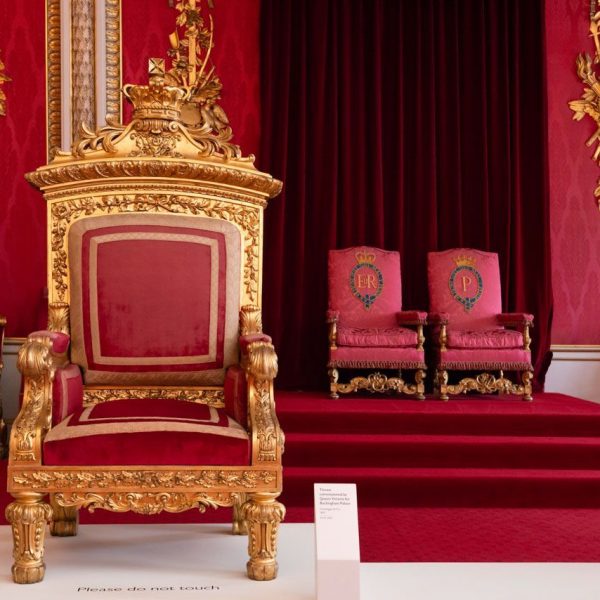 On 10 February 1840 Victoria married her first cousin, Prince Albert of Saxe-Coburg and Gotha. Though Victoria was initially delighted with Buckingham Palace’s ‘high, pleasant and cheerful interiors’, the royal residence was unmodernised and unsuitable for both official and family life.  Victoria was particularly frustrated by the lack of ‘a room capable of containing a larger number of those persons whom the Queen has to invite in the course of the season to balls, concerts etc.’  To address this, she commissioned the architect James Pennethorne to design a new annexe. 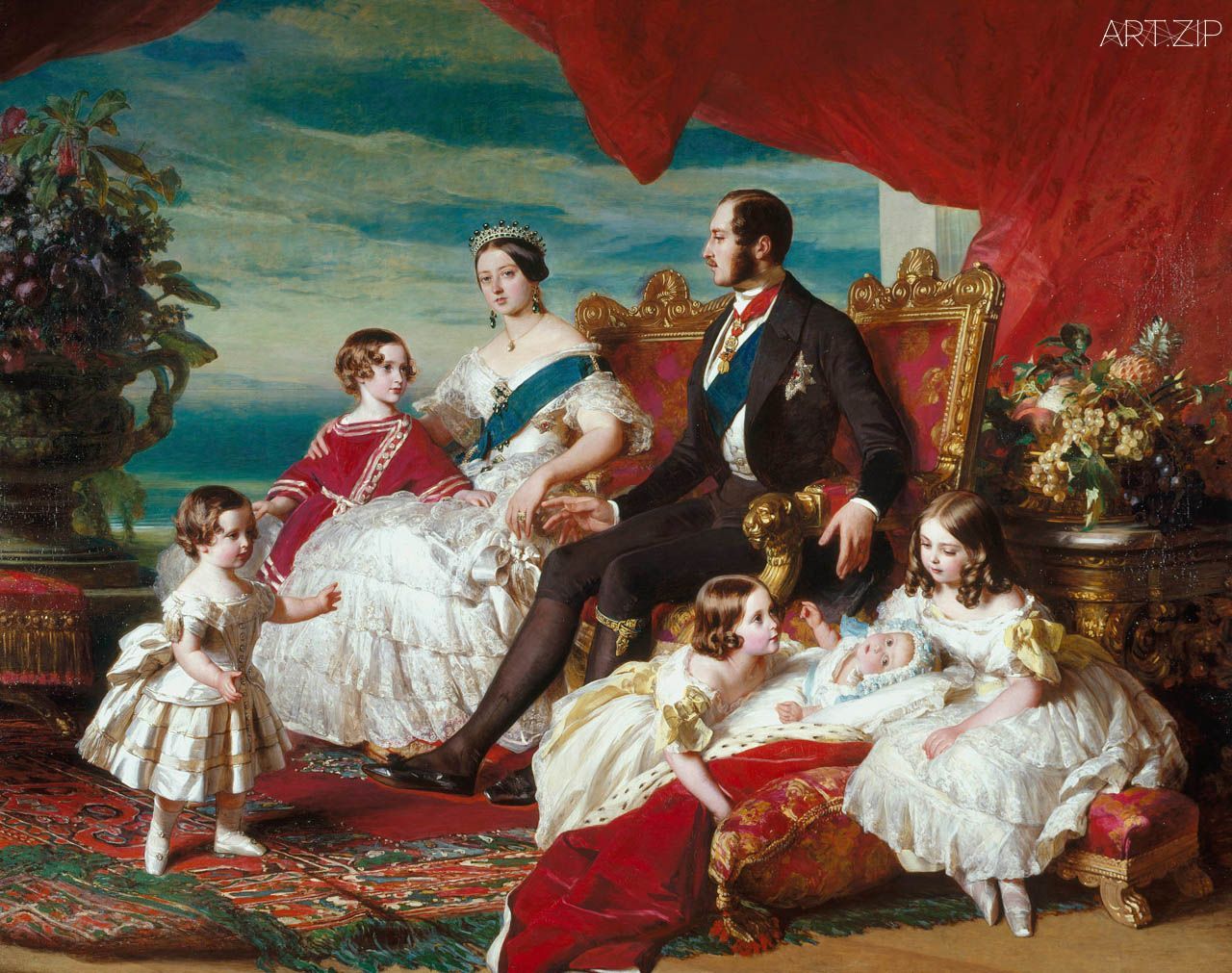 During their time together at Buckingham Palace, Queen Victoria and Prince Albert held three magnificent costume balls.  The Stuart Ball of 13 July 1851 had as its theme the Restoration period, with guests dressed in the style of Charles II’s court.  Queen Victoria’s costume for the Stuart Ball, designed by the artist Eugène Louis Lami, has a bodice and full skirt of grey moiré trimmed with gold lace and an underskirt of gold and silver brocade.  The Queen wrote a detailed account of the occasion in her Journal and commented:  ‘I was so proud and pleased to see my beloved Albert looking so handsome, truly royal and distinguished, and so much admired.  I must say our costumes were beautifully made.’  She illustrated her Journal entry with a sketch of herself and Prince Albert with Prince Charles Leiningen (Victoria’s half-brother) in their Restoration outfits. 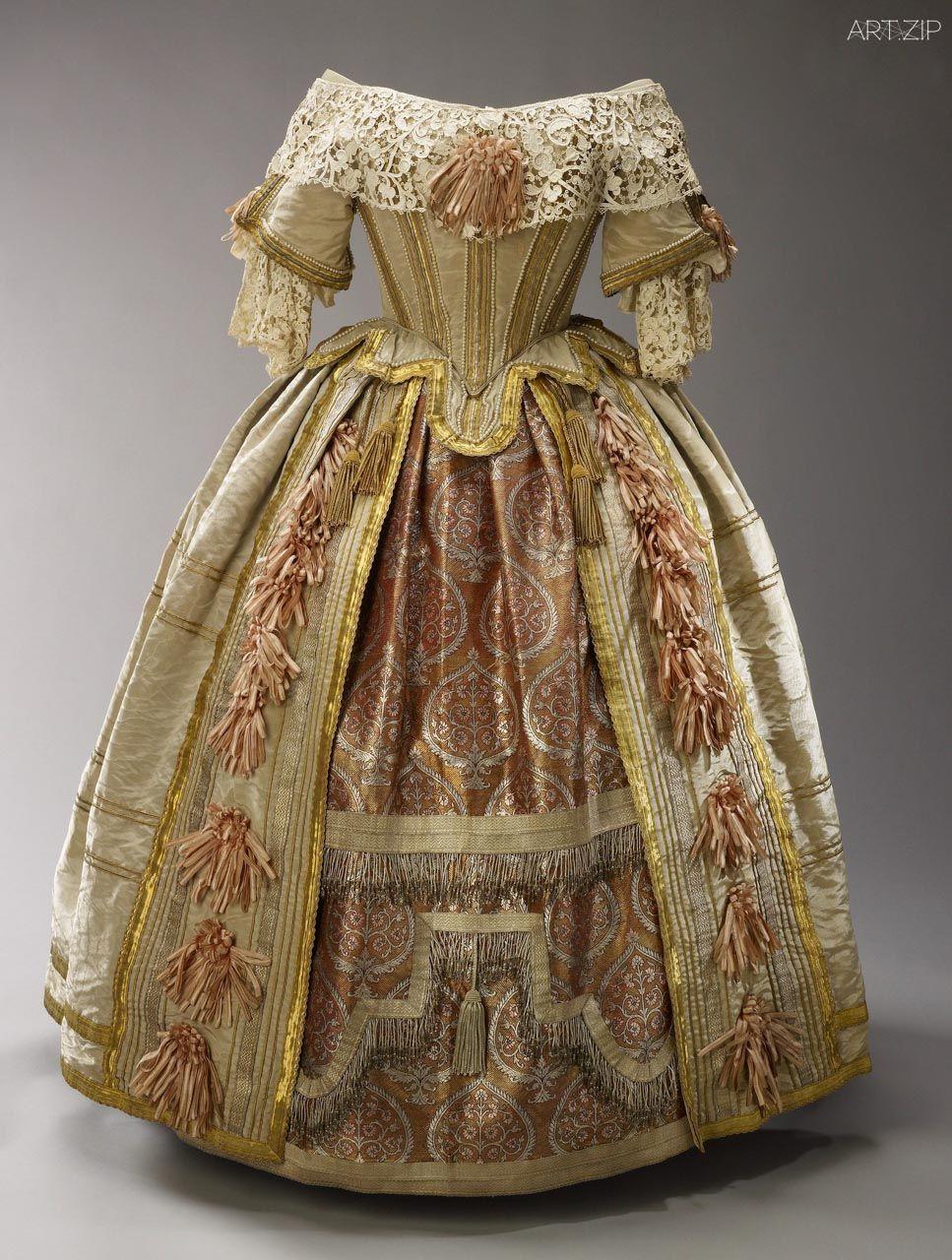 The Palace’s new Ballroom and Ball Supper Room were completed in May 1856, and measuring 33.5 metres long and 18 metres wide, the Ballroom was the largest room in the Palace.  On 17 June of that year, a Ball was held to mark the end of the Crimean War and honour the returning soldiers. 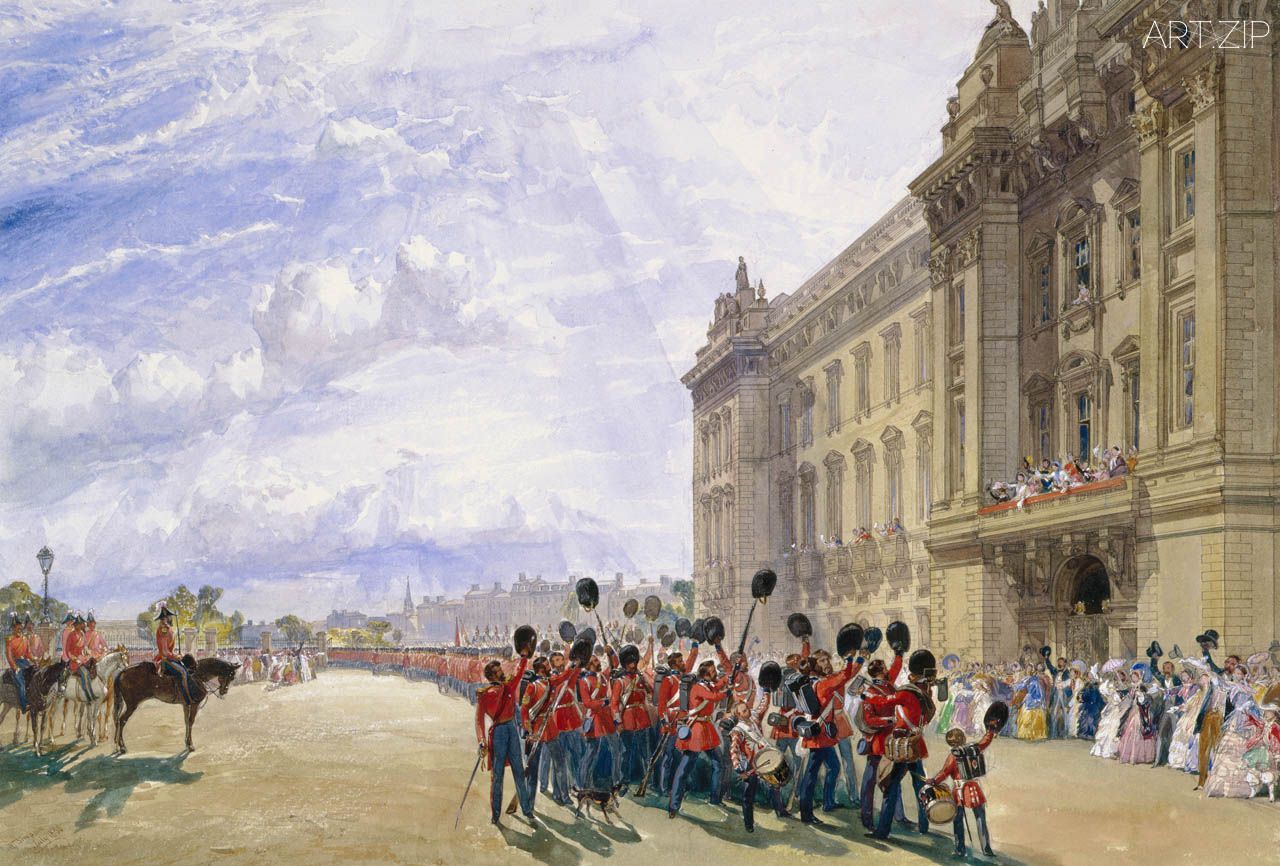 William Simpson, The Return of The Guards from The Crimea, Outside Buckingham Palace, 9 July, 1856, Jul 1856. Royal Collection Trust © Her Majesty Queen Elizabeth II 2019.

The Ball of 1856, recorded in a watercolour by Louis Haghe, has been recreated for visitors using a Victorian illusion technique known as Pepper’s Ghost and a series of digital projections around the Ballroom.  Four couples appear performing the opening waltz to Italian composer Giuseppe Verdi’s La Traviata, while the original Italian Renaissance-inspired decoration of silk hangings and Raphael-inspired cartoons, devised by Prince Albert’s artistic advisor, Ludwig Grüner, is recreated on the walls of the room.  In the adjoining Ball Supper Room, projections have returned the original ceiling decoration of exotic birds and gold stars against a rich blue background, allowing visitors to imagine both spaces as Victoria and Albert would have known them. 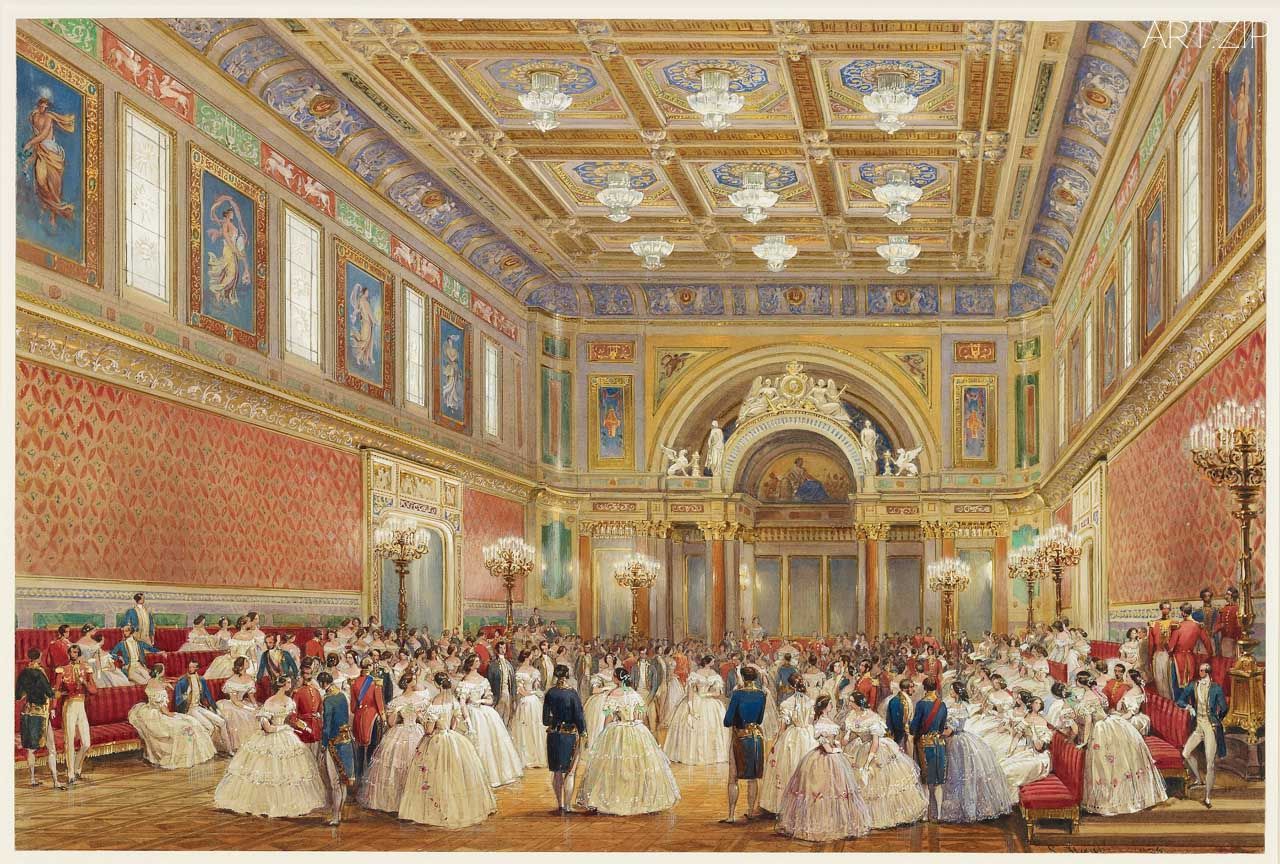 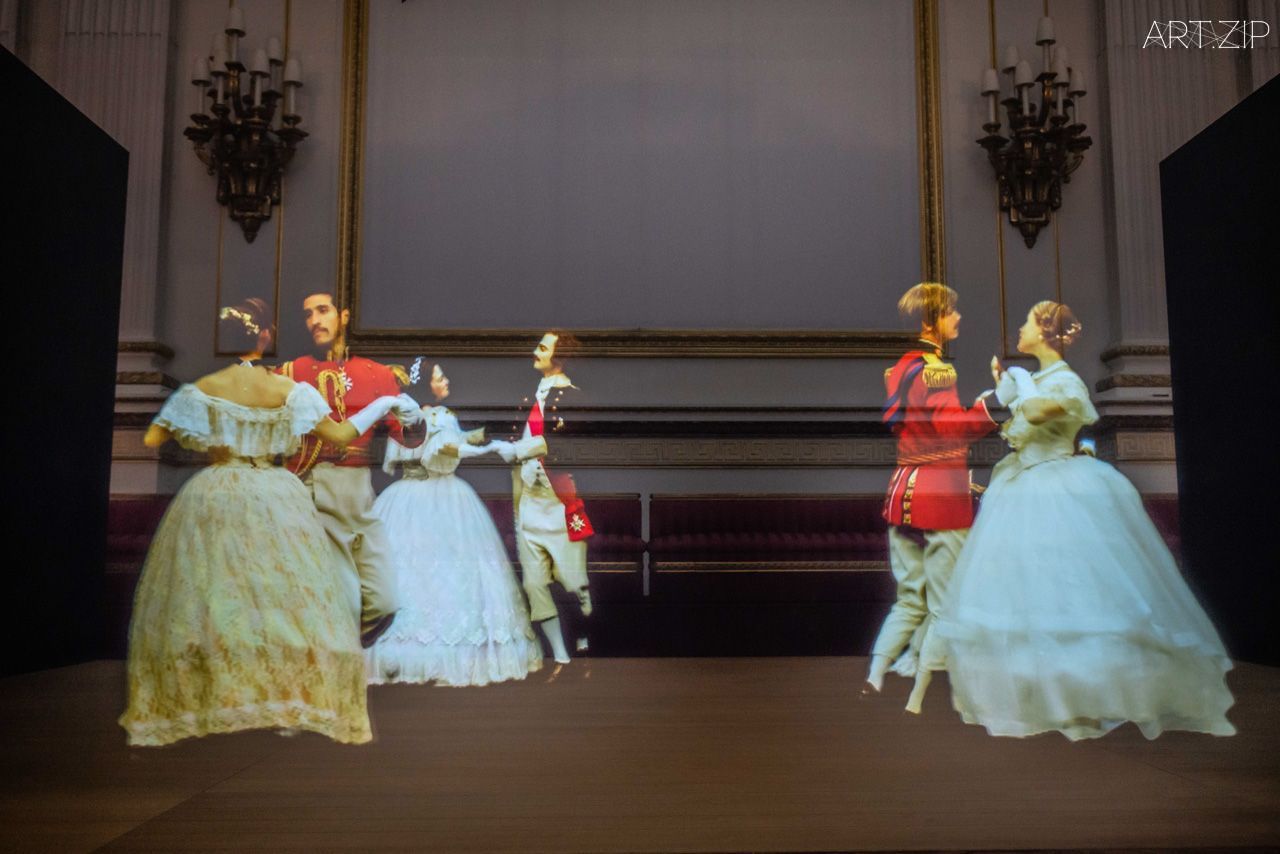 New kitchens were also incorporated into Pennethorne’s plans, providing the Palace’s 45 chefs with the room and facilities to demonstrate the breadth of their culinary skills.  In the State Dining Room, the table is dressed with items from the ‘Victoria’ pattern dessert service, purchased by the Queen from the stand of Minton & Co. at the Great Exhibition in 1851, and the Alhambra table fountain, a silver-gilt and enamel centrepiece commissioned by Victoria and Albert from R & S Garrard in the same year.  On pieces of silver-gilt from the Grand Service, commissioned by Victoria’s uncle, George IV, sit replica desserts based on a design by Charles Elme Francatelli, Queen Victoria’s Chief Cook. 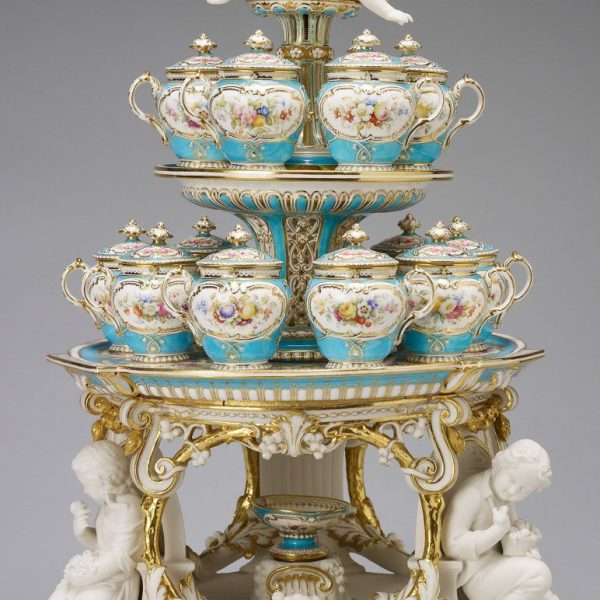 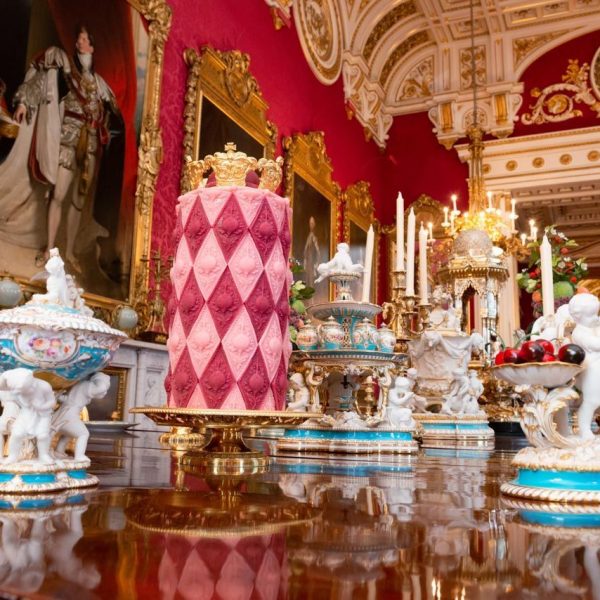 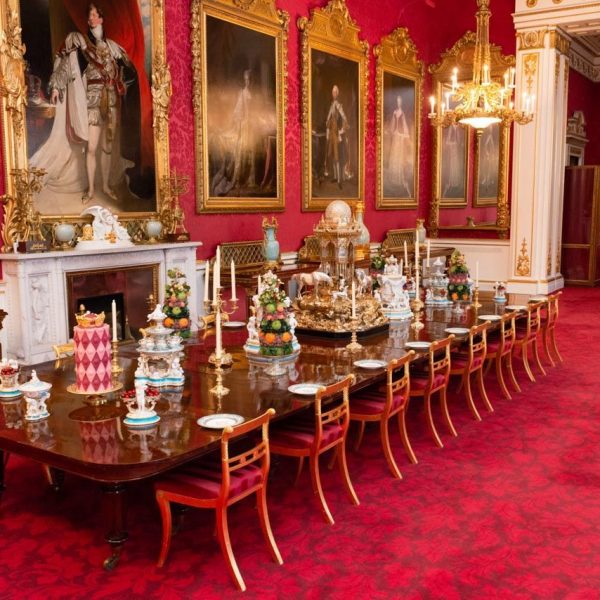 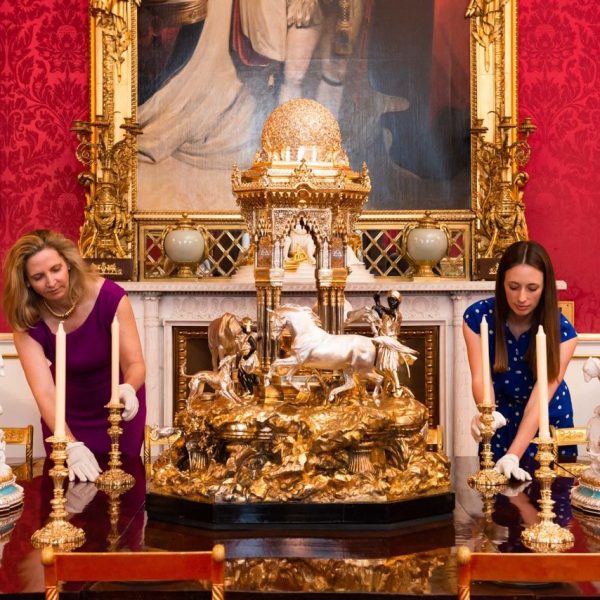 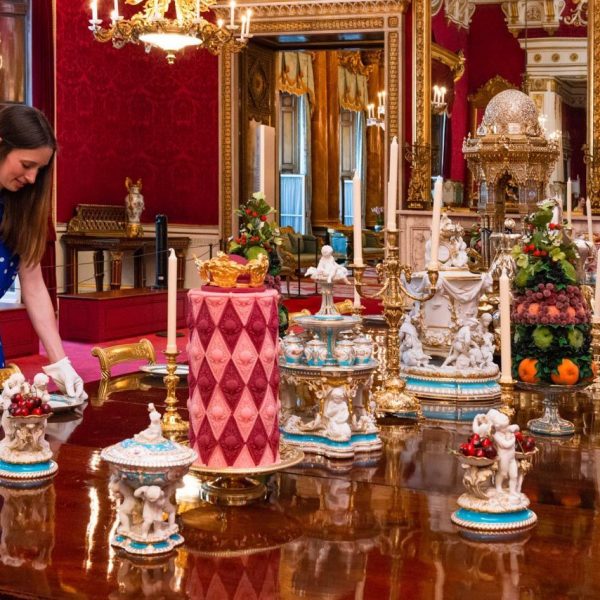 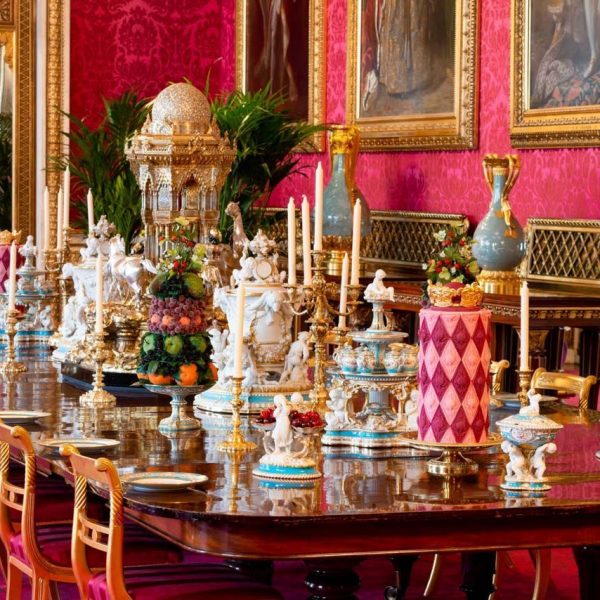 Visitors will also learn how Victoria made Buckingham Palace what it remains today – the headquarters of the Monarchy, a rallying point for national celebrations and a family home – and how she created traditions that still endure, including appearances by the Royal Family on the balcony at the front of the Palace and the annual summer Garden Parties. 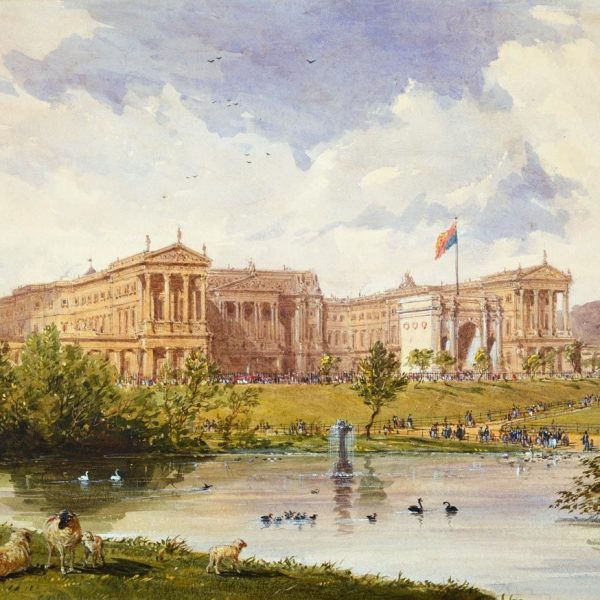 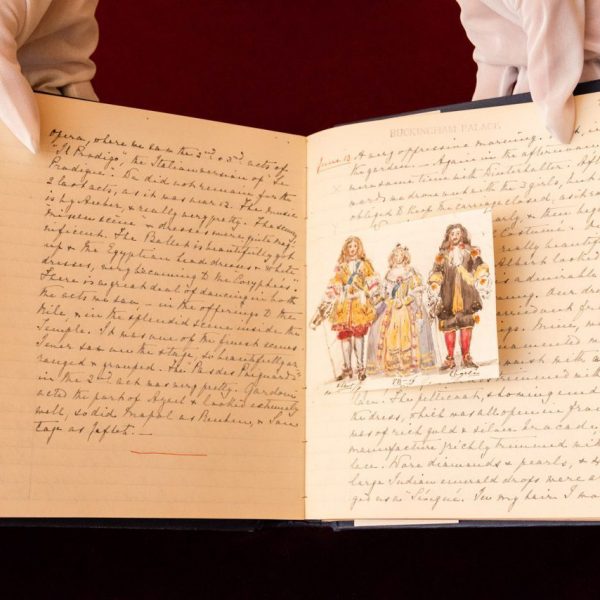 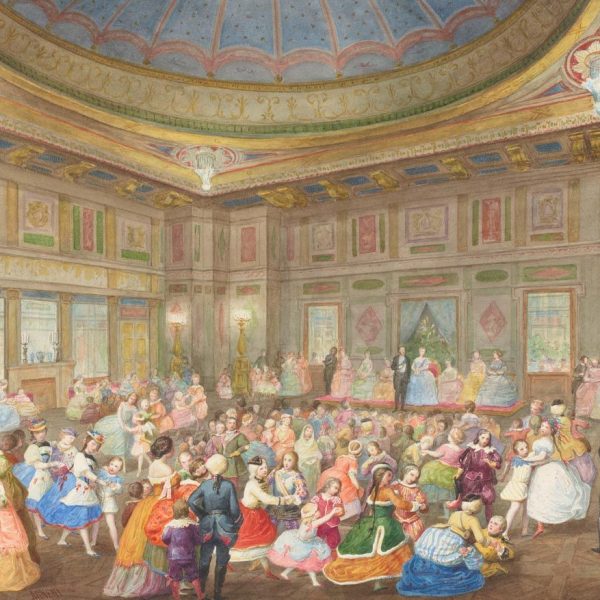 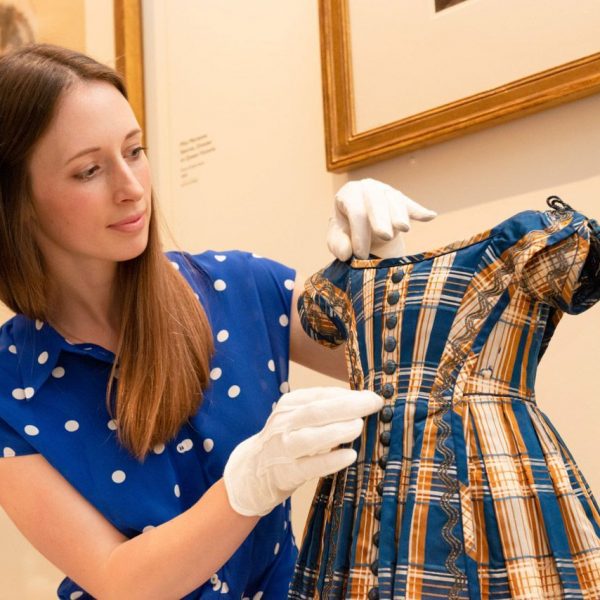 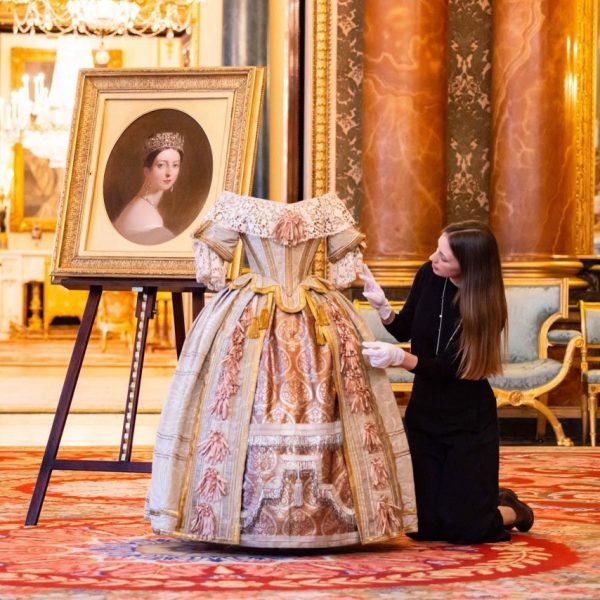 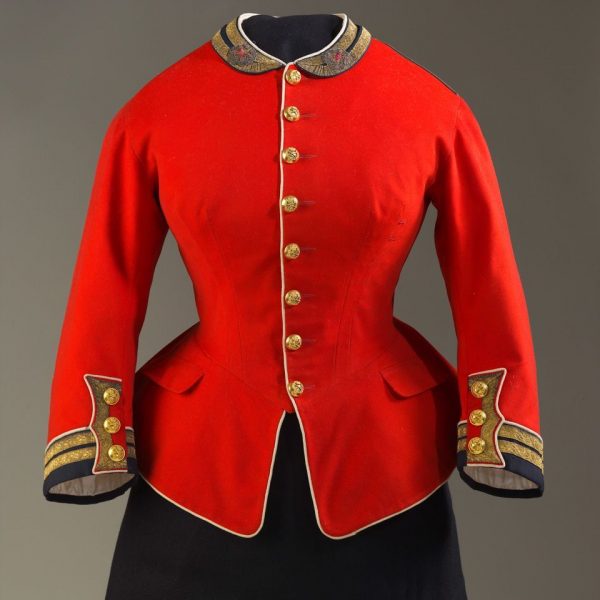