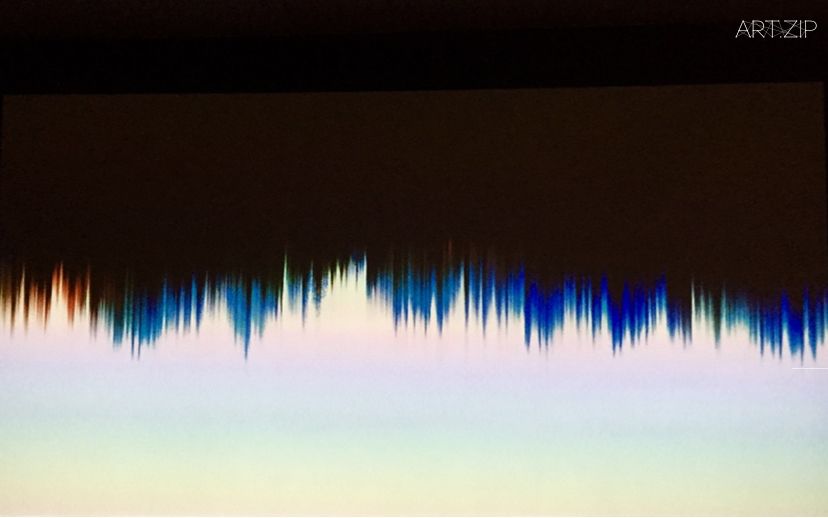 This summer, the National Gallery offers visitors a unique opportunity to experience some of the highlights of the collection in a very different way, through what they hear as much as what they see.

Leading contemporary sound artists and musicians Nico Muhly, Susan Philipsz, Gabriel Yared, Jamie xx, Chris Watson, Janet Cardiff and George Bures Miller have been commissioned to respond to six paintings of their choice from the National Gallery collection. Each brand new ‘soundscape’ has been specially created for the exhibition and can only be heard within the exhibition space for the duration of the show. 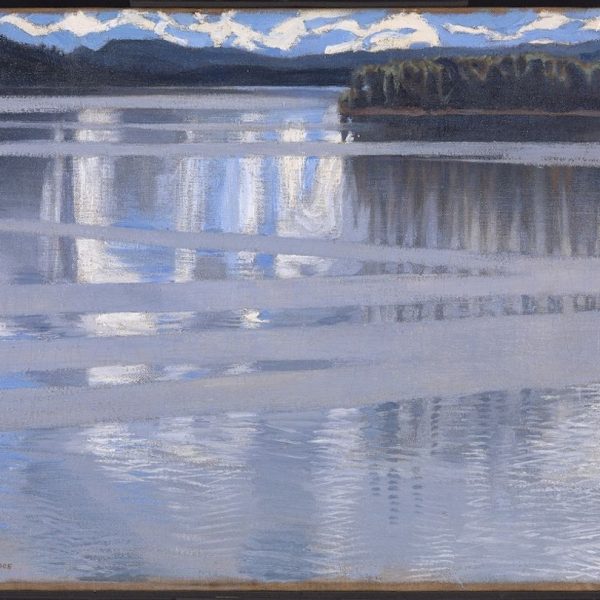 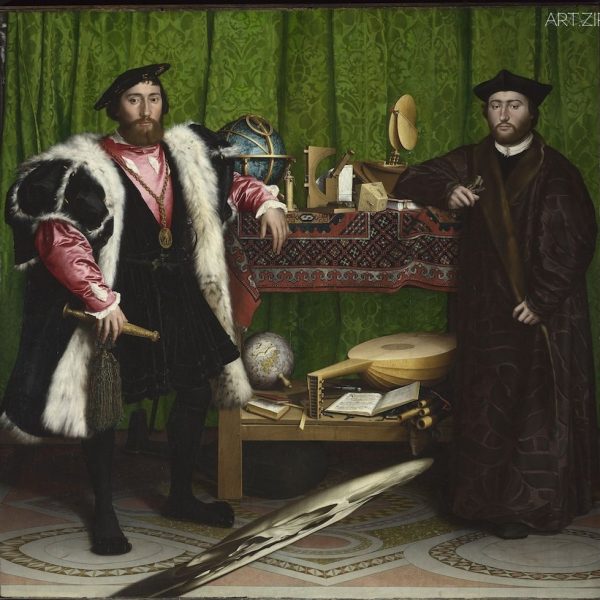 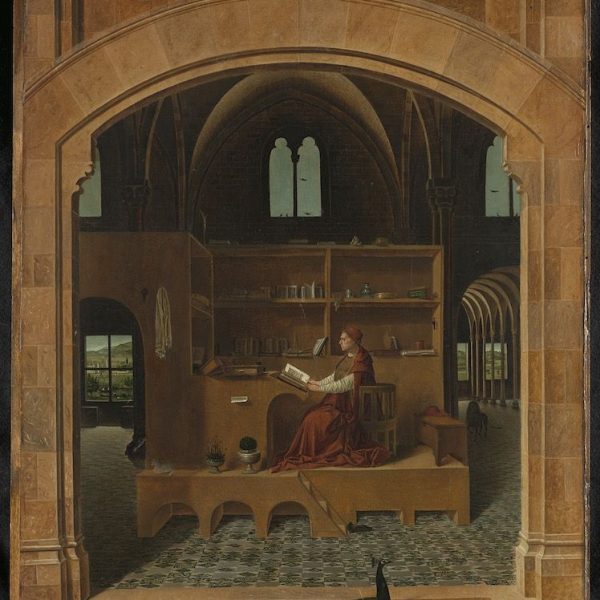 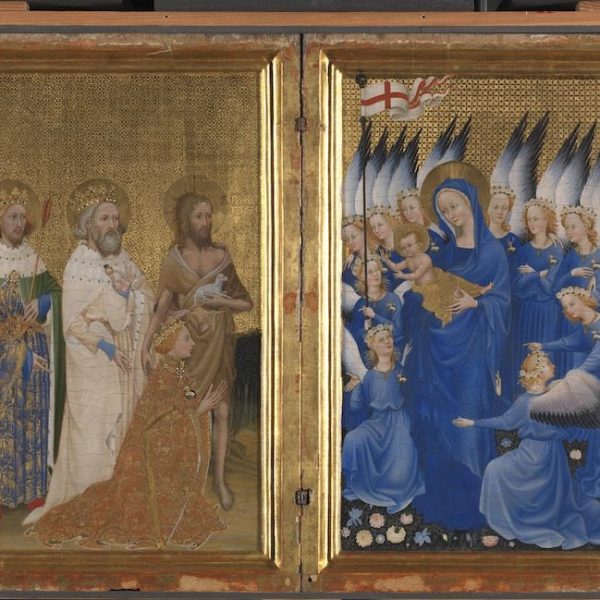 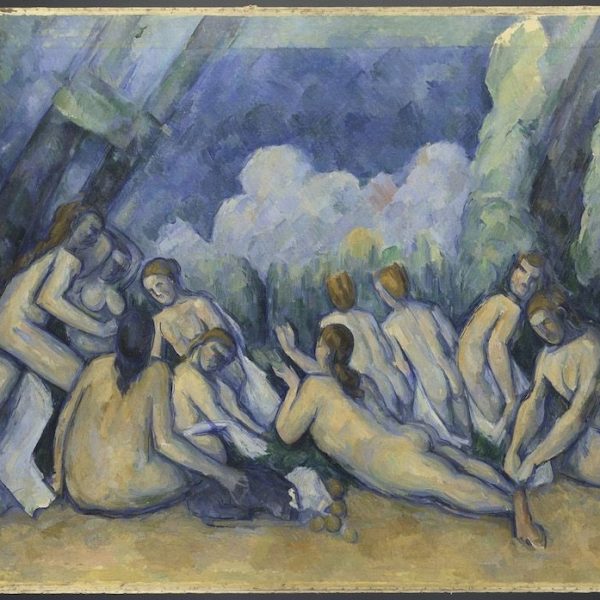 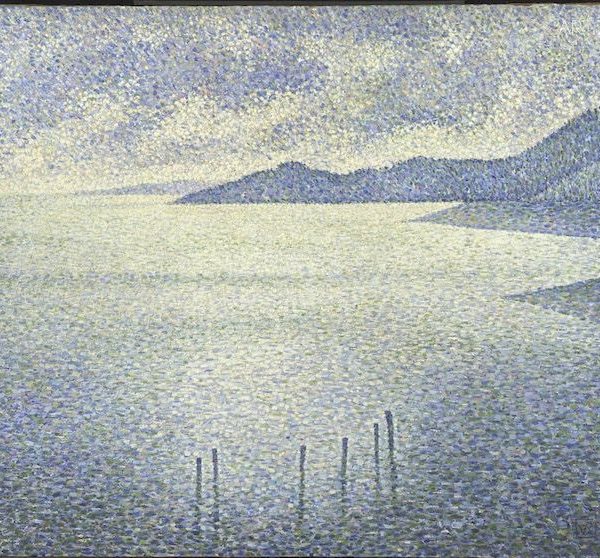 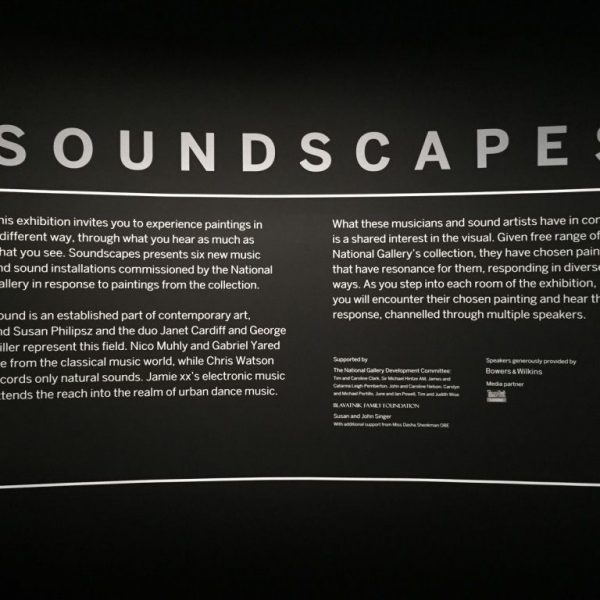 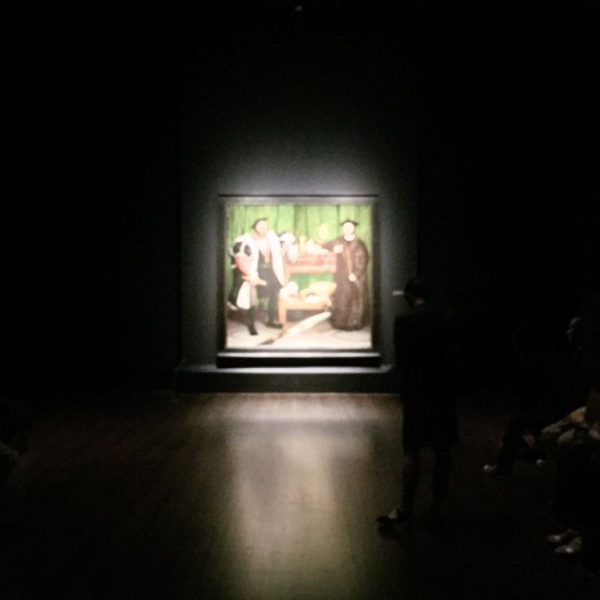 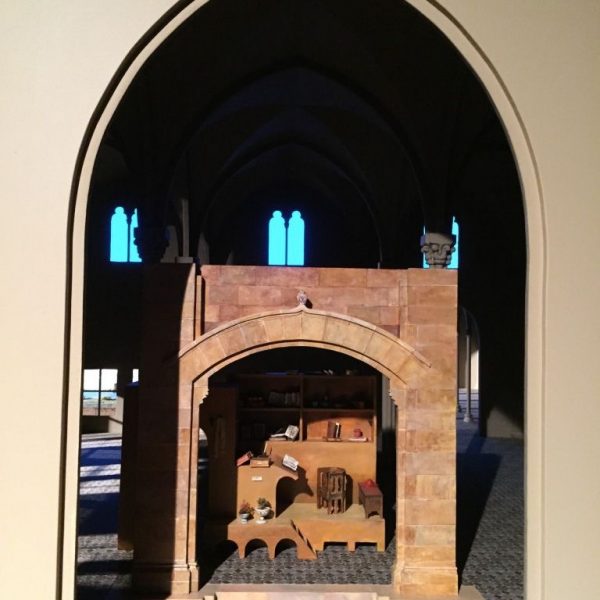 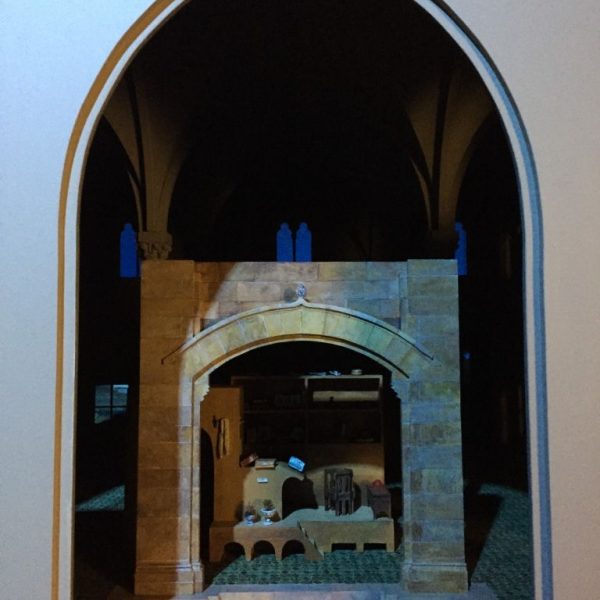 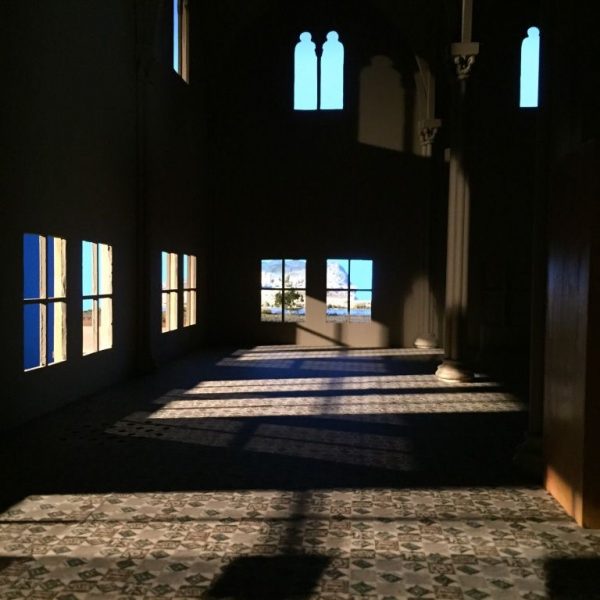 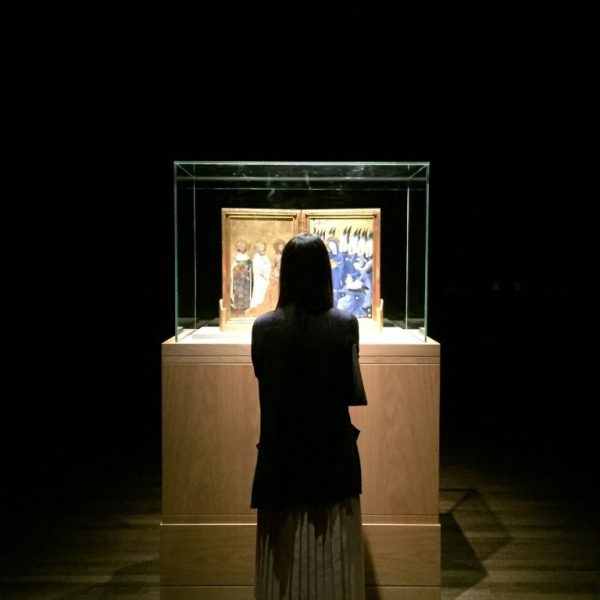 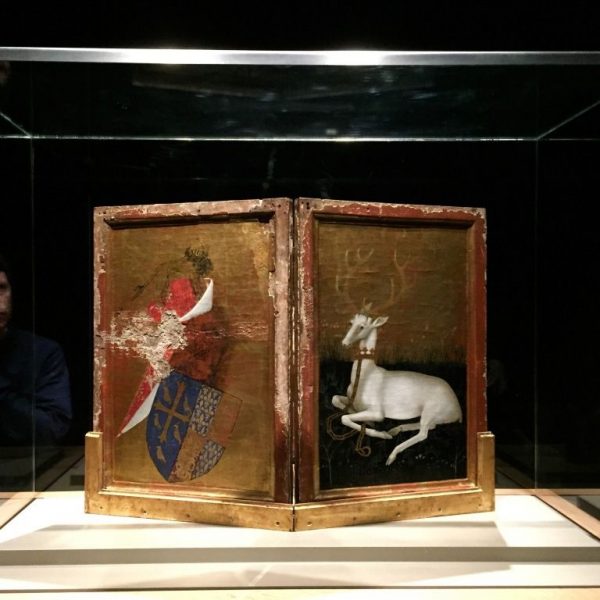 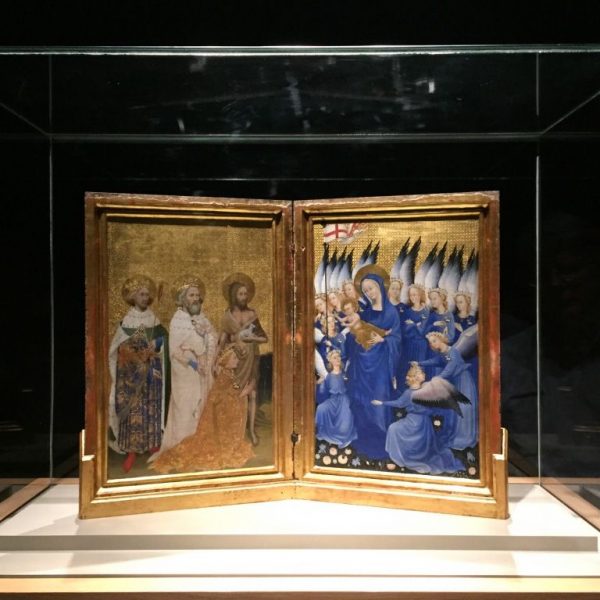 Each musician and sound artist will have a soundproofed room in the Sainsbury Wing exhibition space in which their chosen painting and their new sound or musical piece will be installed. These encounters between the visual and the sonic offer visitors an opportunity to experience and think about paintings in an entirely new way: to hear the music within the painting, and to see the visual within the music. This innovative type of exhibition experience has never before been staged at the National Gallery.

Ambitious in its approach, this cross-disciplinary exhibition aims to celebrate the National Gallery’s collection and demonstrate how masterpieces from the collection continue to inspire living artists today. By allowing familiar paintings to be encountered and contemplated from a new angle, visitors will be encouraged to rethink their perception of the selected paintings and explore wider conversations about how we experience art and the affinities that exist between music and painting.

“We are tremendously fortunate to have musicians and sound artists of this calibre creating completely new work for the National Gallery… And it is incredibly exciting to see how they will metamorphose these great paintings into musical and sound form.”

“When sounds have been composed in response to a work of art they can encourage – even compel – concentration. Furthermore, it can combine with an image to captivate and transport us. Silence, afterwards, is not the same!” 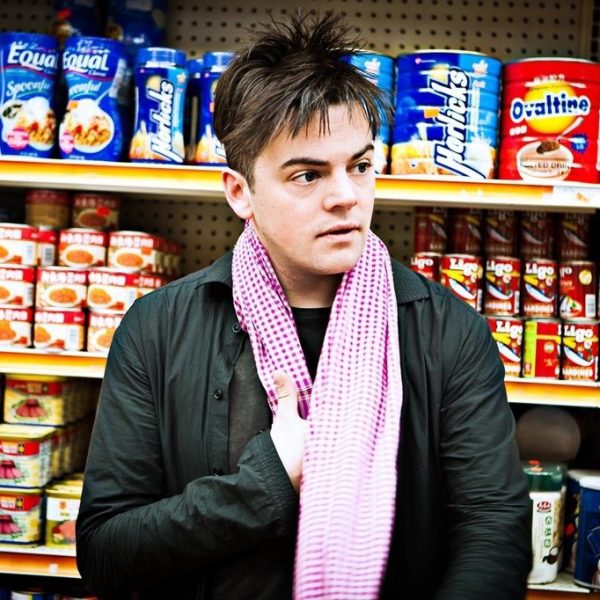 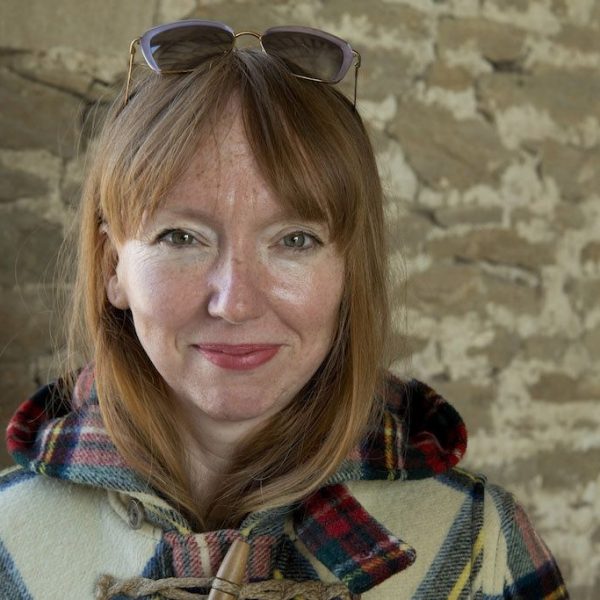 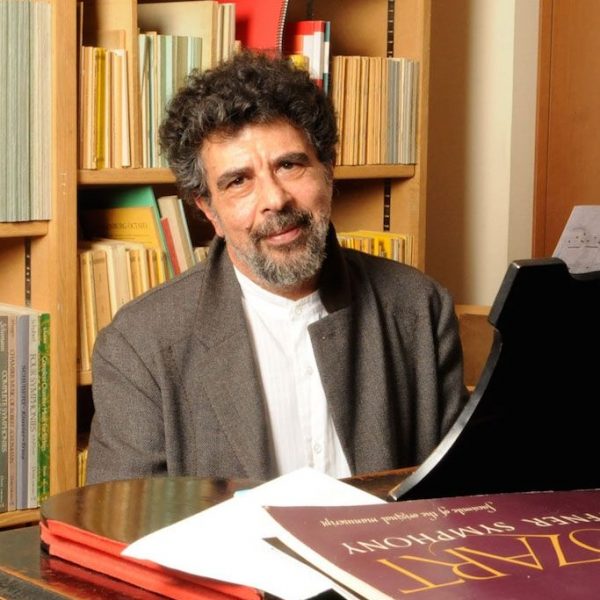 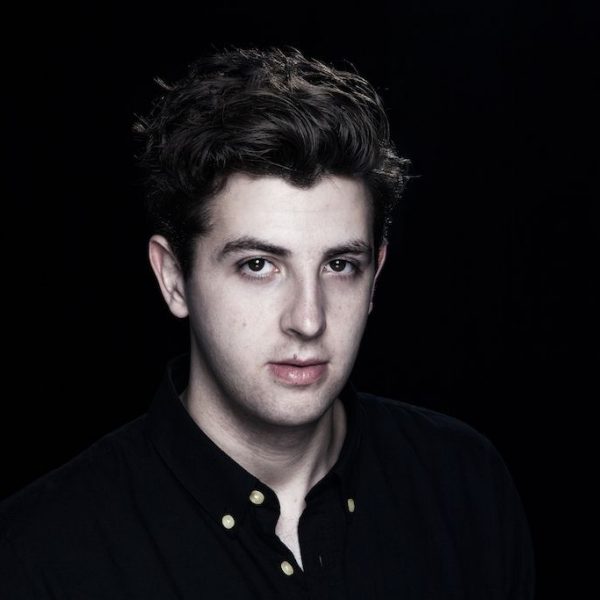 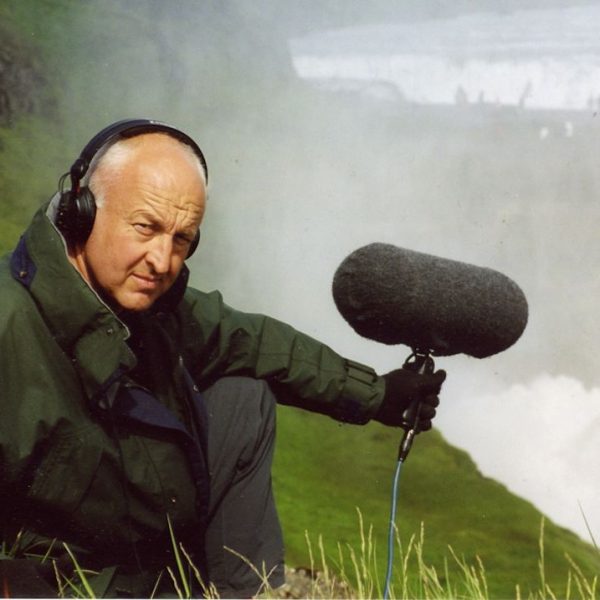 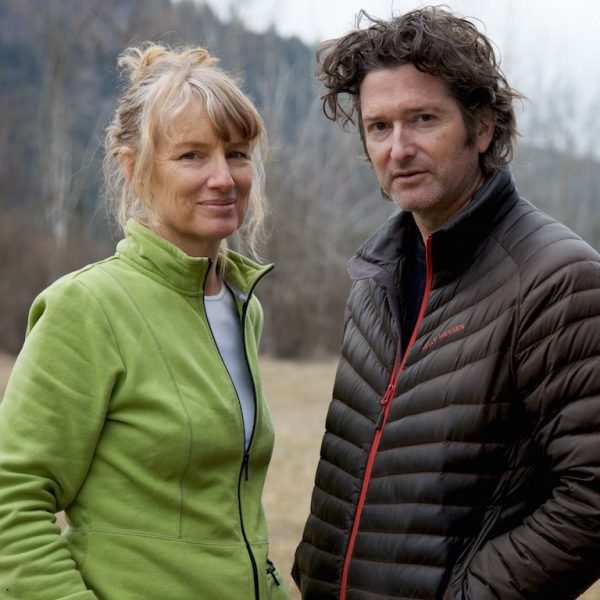 Nico Muhly (b. 1981) is a composer of chamber music, orchestral music, sacred music, opera, ballet, and music for collaborators across a variety of fields. His wide range of work includes commissions from The Metropolitan Opera, English National Opera, New York City Ballet, St John’s College, Cambridge and Wigmore Hall. The Metropolitan Opera recently commissioned him to compose ‘Marnie’ for its 2019-2020 season, based on Winston Graham’s 1961 novel that was adapted into an Alfred Hitchcock movie. His other operas, ‘Two Boys’, and ‘Dark Sisters’, played at the English National Opera, The Metropolitan Opera, Gotham Chamber Opera, and the Opera Company of Philadelphia. Nico has also scored ballets for the Paris Opera Ballet, in addition to arranging music by Antony & the Johnsons, Grizzly Bear, and the National. He lives in New York City.

Susan Philipsz (b. 1965) was born in Glasgow and trained in Fine Art at Duncan of Jordanstone College of Art, Dundee and the University of Ulster, Belfast. In 2001 she was awarded a residency in Berlin, where she has lived since. In 2010 she won the Turner Prize, and in 2014 she was awarded an OBE. Known for her installations that explore the relationship between sound and architecture, she has exhibited internationally, including recent displays of her work ‘War Damaged Musical Instruments (Pair)’ at the Kunsthistorisches Museum, Vienna and ‘As Many As Will’ at Hauser & Wirth, Somerset. Public collections include, amongst many others, Tate, London; Solomon R. Guggenheim Museum, New York; and the Walker Arts Center, Minneapolis. Susan is represented by Isabella Bortolozzi Galerie in Berlin and Tanya Bonakdar Gallery in New York.

Oscar-winning composer Gabriel Yared (b.1949) is one of the most well respected and renowned composers in film. Best known for his work on the films of Anthony Minghella, Yared won an Oscar for his score to Minghella’s ‘The English Patient’ (1996) which also won him a BAFTA, Golden Globe and Grammy Award. He was also nominated for his work on ‘The Talented Mr. Ripley’ (1999) and ‘Cold Mountain’ (2003). Born in Beirut, Yared was originally known for his work in French cinema, particularly that of ‘Betty Blue’ (1986). He has also composed ballet music for works such as Roland Petit’s ‘Clavigo’ and Wayne McGregor’s ‘Raven Girl’ for the Royal Ballet.

Jamie Smith (b.1990), better known by his stage name Jamie xx, is an English electronic music producer, DJ, and remix artist, known both as a solo act and as one third of the London-based band, The xx. Ever since emerging onto the UK music scene and winning the prestigious 2010 Mercury Music Prize with The xx, Jamie is one of the most in-demand and talked about artists currently at the helm of UK dance music. In addition to his solo tracks, he has remixed music for, amongst many others, Gil Scott Heron, Radiohead, Adele, and Florence and the Machine. The former culminated in a release of a 13 track remix album with Gil Scott-Heron entitled ‘We’re New Here’, which was released in 2011 to critical acclaim. Jamie has also produced music by Drake and Alicia Keys.

Chris Watson (b.1953) is one of the world’s leading recorders of wildlife and natural phenomena. He is best known for his television work with David Attenborough, including the ‘Life’ series and ‘The Life of Birds’ which won a BAFTA Award for ‘Best Factual Sound’ in 1996. Watson was also the location sound recordist with David Attenborough on the BBC’s series ‘Frozen Planet’ which won a BAFTA Award for ‘Best Factual Sound’ (2012). Born in Sheffield, Watson was a founding member of the influential Sheffield based experimental music group Cabaret Voltaire during the 1970s and early 1980s. His sound recording career began in 1981 when he joined Tyne Tees Television. Since then he has developed a particular and passionate interest in recording the wildlife sounds of animals, habitats and atmospheres from around the world. As a freelance composer and recordist for film, TV and radio, Watson specialises in natural history and documentary location sound together with sound design in post-production. His work has frequently been included in festivals, museums and galleries across the world.

Canadian artists Janet Cardiff (b.1957) and George Bures Miller (b.1960) live and work in Grindrod, British Columbia, and Berlin, Germany. The artists have been collaborating since 1995, and are internationally recognised for their immersive multimedia works. Incorporating dramatic audio tracks into their visually striking installations, the artists create engaging and transcendent multisensory experiences that draw the viewer into ambiguous and unsettling narratives. Together they have received international acclaim for their sound installations, including ‘Pandemonium’ at the Eastern State Penitentiary, Philadelphia and Janet’s solo work, ‘The Forty Part Motet’. The artists have also had solo shows at numerous international venues. Representing Canada at the 2001 Venice Biennale, Cardiff and Miller received the Biennale’s Premio Prize and Benesse Prize. Most recently, the artists debuted two new site-specific commissions for The Menil Collection in Houston, Texas, and the Museo Nacional Centro de Arte Reina Sofia in Madrid, Spain.