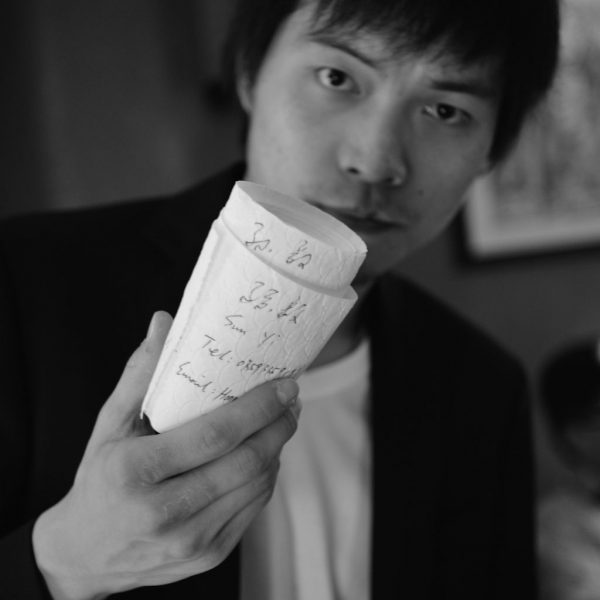 Art would itself be conditioned by nonart… – Jacques Derrida

What effectively covers and makes unseen Sun Yi as an artist and as perhaps above all an individual, is first and foremost the collaboration of hands and mouths.

Sun Yi’s art (already, from the very beginning of the originary sentence, it betrays by separating itself. What is Sun Yi’s art? What is the relationship between Art and arts, maybe not especially, but at least specifically, in Sun Yi’s case? For an artist who considers himself at times working art – that is, life, possibly – and working painting/drawing [for a Chinese artist, these two are even closer to each other] at other, can the master word for exhibitions in general, “art”, still lead and command? The mutual contamination of art and life troubles the hands of Sun Yi’s more than everyone’s) works by offering (to none other than the artist himself) suggestive trajectories. Being absolutely certain of one’s uncertainty is suggested to be the thematics of such an urgent yet playful report. A line – curved, bent, testifying to the sheer force of gravity – adds to another line – traced by the force of art, attempting to defy, elevate, and efface exactly that force of gravity. “There are two trees in the courtyard, one is a Chinese jujube; the other, is as well a Chinese jujube.” (Van Gogh’s shoe)laces, crossing themselves, appearing and disappearing orderly: suggestive trajectories, in a circular movement, ties up and unties itself. The first movement involves a couple of hands, as that which is proper to artistic practice; the second movement involves a couple of mouths, as, however, that which effectively cancels this art in its specific, foreign movement that is called the tradition of Chinese art.

The everydayness (which is, again, separating itself by the forces of two nations, two cultures, two traditions of art – or more than two, with Sun Yi’s recent American experience in mind? Separated, that is, this everydayness is incompatible with the everydayness found in Tianjin) on which a number of works are based, ties itself. From the opposite perspective, one is to observe that the work-upon-everydayness deliberately and indefinitely subjects itself to this everydayness on which this work is based, hoping one day it will become this everydayness and can be finally free of itself as work of art. The techne yearns for the physis: after at least Duchamp and a number of ancient Chinese signatures found on works of art, the techne is not satisfied with itself in relation to its material – physis – and starts to think about the possibility of a suicide (but only if this suicide means, as any other suicide, an undoing, a return, a possibility of revealing what was before the origin by integrating oneself back into a certain mother) as one ultimate act of auto-affection. Following scavengers one sees on the street of China – some typical, staying loyal to their roles, and some surprisingly clean, decent, even stately – Sun Yi by collecting everyday objects – some with a price and some not – perpetuates an ignorance. He calls one’s attention to everydayness, without, prior to this calling, investigating the nature of this everydayness. What is given to him by himself is treated as what is naturally given, when (but only when) he stays faithful to his role as a Chinese artist. Or, better, a Chinese painter. 水土不服, disagreement(s) of water and earth, as involving a lack of knowledge. For this investigation has never been his responsibility.

And, in turn, that always already involves a vanity of knowledge. In a certain and exceptional case, because of a certain, specific vanity, communication becomes impossible. One becomes walled by, not one’s hands but one’s own speech, whether one likes it or not. But we are not to speak too much of it here. We are only to write that, ironically, perhaps Matisse is still right when he suggested with his mouth – not with his hands – cutting a painter’s tongue out. But again, Matisse’s might not work when what is put into question is a mouth that is Chinese. Literatures and philosophies, one Chinese jujube and another Chinese jujube. Mouth: for what are cans, if not something that stay in touch with mouthes, traces of saliva, and are subject to a certain act of kissing? Trash as a new identity, and artist as an identity that is no less novel. Trash as artist – Sun Yi, as a commentator in and of this economy means nothing excessively solemn, for somehow unconsciously, he is no less solemn when his mouth becomes his work, his responsibility. – LB

Derrida: “The third Critique had the merit of identifying in art (in general) one of the middle terms (Mitten) for resolving (auflösen) the “opposition” between mind and nature, internal and external phenomena, the inside and the outside, etc.” What could possibly spring from a Chinese artist that is interested in Kant? What is confirmed in, on and of the mirror – partially damaged, destroyed, has its foundation laid bare – is, after all, in our case, where art and literature, hands and mouths, involuntarily meet. It is revealed that, not only does life confront art, face to face; even behind art that is itself the mirror of life, there is nothing but life, however dull this life in fact is. In the circle that is named Sun Yi, life on both sides of art, art itself disappearing: one is a Chinese jujube; the other, is as well a Chinese jujube, one facing its perilous destiny of 水土不服.