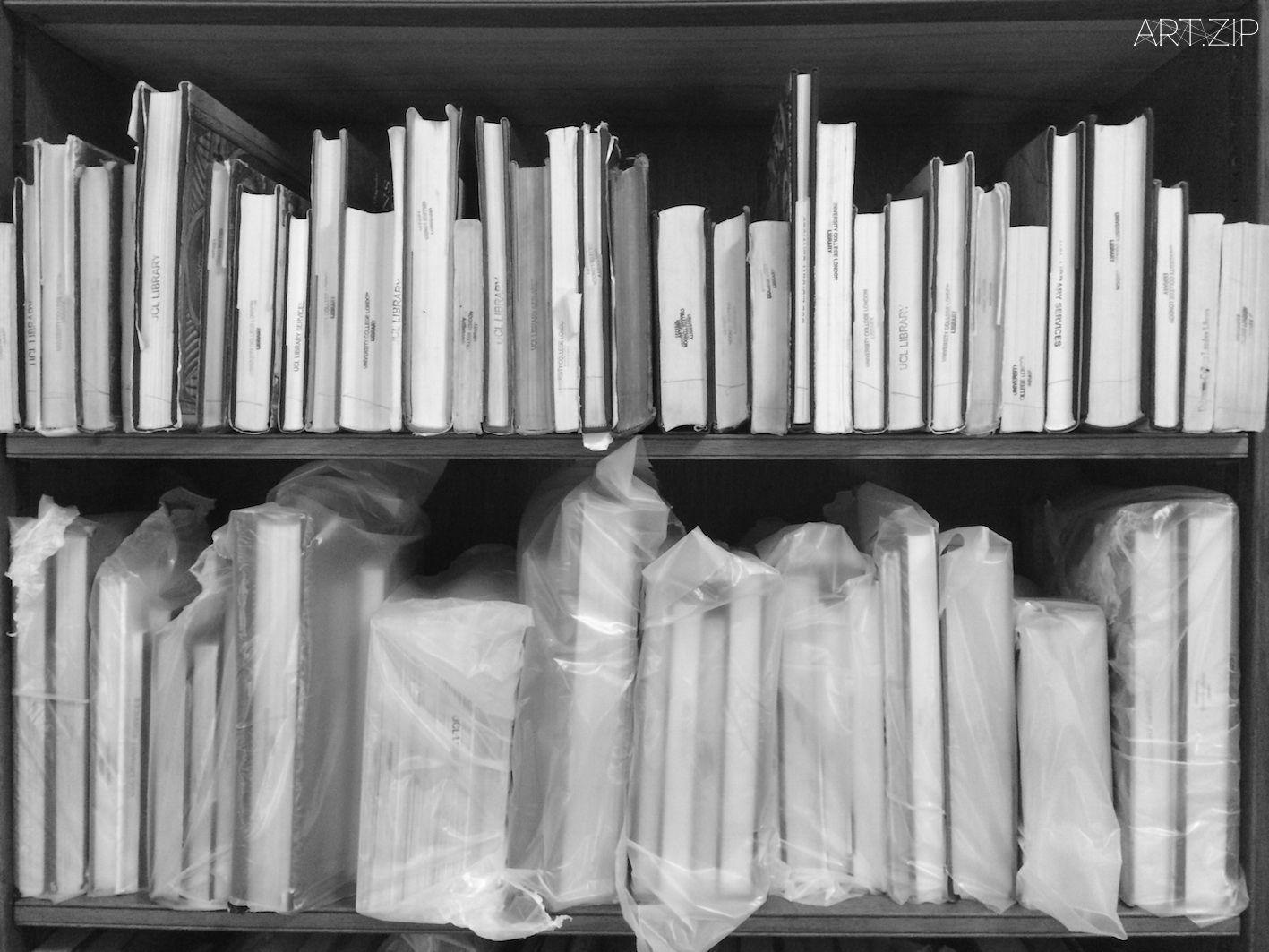 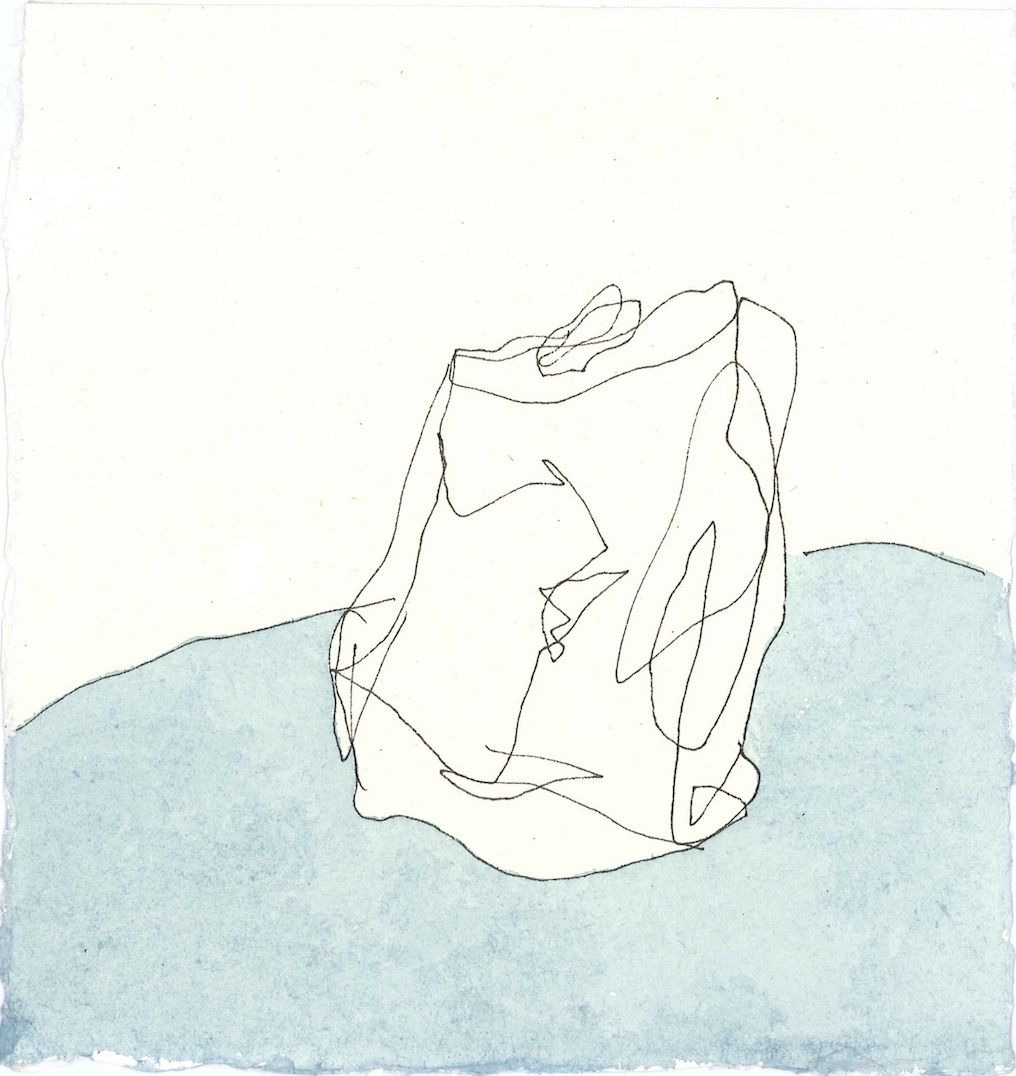 “As a child, I didn’t understand the definition of being an artist,” says recent Slade graduate, Sun Yi (born 1988), in his typically philosophical manner. “Sometimes there are remains from the ancient past and people call these artworks; then, if they know who made them, these people are called ‘artists’. If I’m a teacher, I have to go to school to teach every day; if I’m a postman, I have to ride around the city delivering mail every day – but what do artists do? Someone might say: ‘I haven’t had any inspiration or made any work for 10 years,’ but he is still an artist. It’s a different phenomenon. It’s hard to define. These people do what they like and they write about what they want, so, if that’s an artist, maybe I am an artist too.”

In his artist statement, Sun continues: “Art, as far as I have practised it, seems to me like water, tasteless, but you could never live without it. Whatever forms it takes, I get bored as the excitement fades and as time passes, I even forget it ever existed.” What becomes clear, talking to Sun, is that his practice, to a large extent, is about playfulness and exploration. An idea he reiterates numerous times throughout our conversation is: “Really, it’s just about being playful. I don’t like to do things with a purpose.” But what makes a work of art, I ask? “I had a tutor at the Slade,” Sun recalls, “who always said we could only do art by making things. In my mind, there are the things I want to make, and then I make them: so these could be artworks.”

I wonder, then, what he makes of artists like Duchamp, with his readymades? “Oh, it’s still making something,” Sun says without hesitation, “because he moves the object somewhere new. It’s all about an action of the mind or an action of the body – that’s the practice that declares whether something’s a work or not. Even a photograph: it’s not by the machine, because you press the button. That’s the action of your making it.”

When setting out on a new work, Sun doesn’t have any expectation as to how it will look once finished. “It’s like an architectural concept that pushes me to make my work,” he explains. “I don’t know the final result. I don’t mean the kind of architectural design that’s separate from the actual fabricating of the building, like we have today, but more in the vein of Antoni Gaudí, who made the whole building himself. His time was the building’s time. He could change the work during the process. Architects today can’t do this. In my work, I can change things during the process. It’s not really necessary to follow any structure.”

Sun works with many different media and is continually responding to every day things. His works aren’t invested with any particular meaning, as he prefers to let viewers bring along their own interpretations. In addition, meaning doesn’t come from any one work in isolation; it’s about the exchange of things. In 2014, Sun put together a performance in Beijing that embodied this idea quite literally. Called the One Cent project, it comprised Sun inviting audience members to buy his paintings for one cent a piece. If they didn’t have a one cent coin, however, but still wanted to buy something, they could exchange something of theirs, which they deemed appropriate in value. What remained at the end – Sun’s work, coins and objects exchanged – was documented photographically. “Again,” Sun says, “it was a playful work. But it asked people to think about the world we live in and its systems. It was humorous, but it was also quite political.” 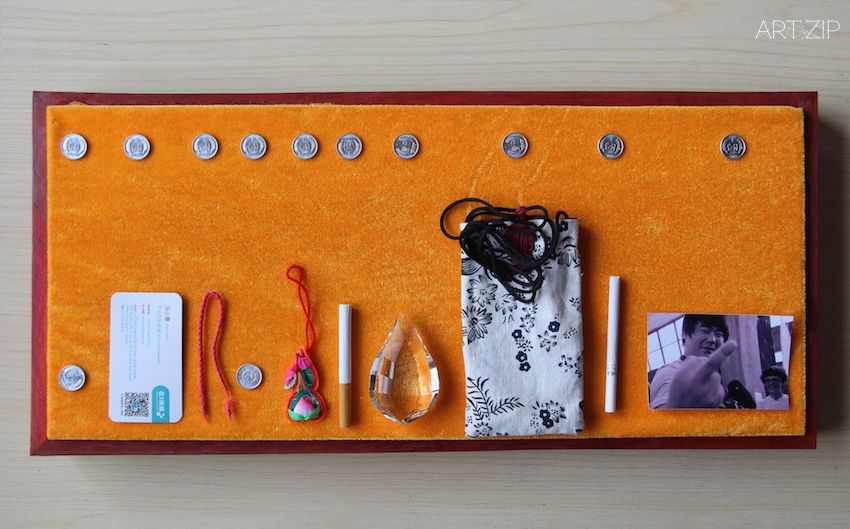 At university in China, Sun began reading German classical philosophy for pleasure. “I don’t think it’s exactly necessary knowledge for an artist,” he says. “It was more of a personal hobby.” But his encounters with Kant and Wittgenstein gave him a different angle from which to analyse things. “Sometimes talking about an artwork involves thinking about a particular theory. Philosophy, art and science – they belong to the same ideology.”

Concepts play an important role in Sun’s creativity, although he is not sure whether he would class himself a conceptual artist. “My work depends on a concept and my work can be a concept too, but I don’t necessarily know what that concept is. Some concepts are unknown, but they’re still conceptual.” As ever, we teeter on the brink of some truly epistemological debate. Sun continues by drawing a distinction between inspiration and ideas. “Inspiration is generated from somewhere,” he explains, “from nowhere even, but ideas are under the control of the mind. I can create ideas through drawing. Drawing, for me, is something I can do everywhere. You have to keep your mind open and accept everything you possibly can accept, then inspiration will come. The mind is changing all the time. Memory can create ideas from previous inspiration.” Sun considers drawing to be his primary medium. “For me, the most comfortable thing is the small object. I like drawing on paper, small-scale. The area should be no bigger than the size of your hand. I think this comes from my calligraphy practice, learning to enjoy your drawing freely, without big movements and without pressure.” 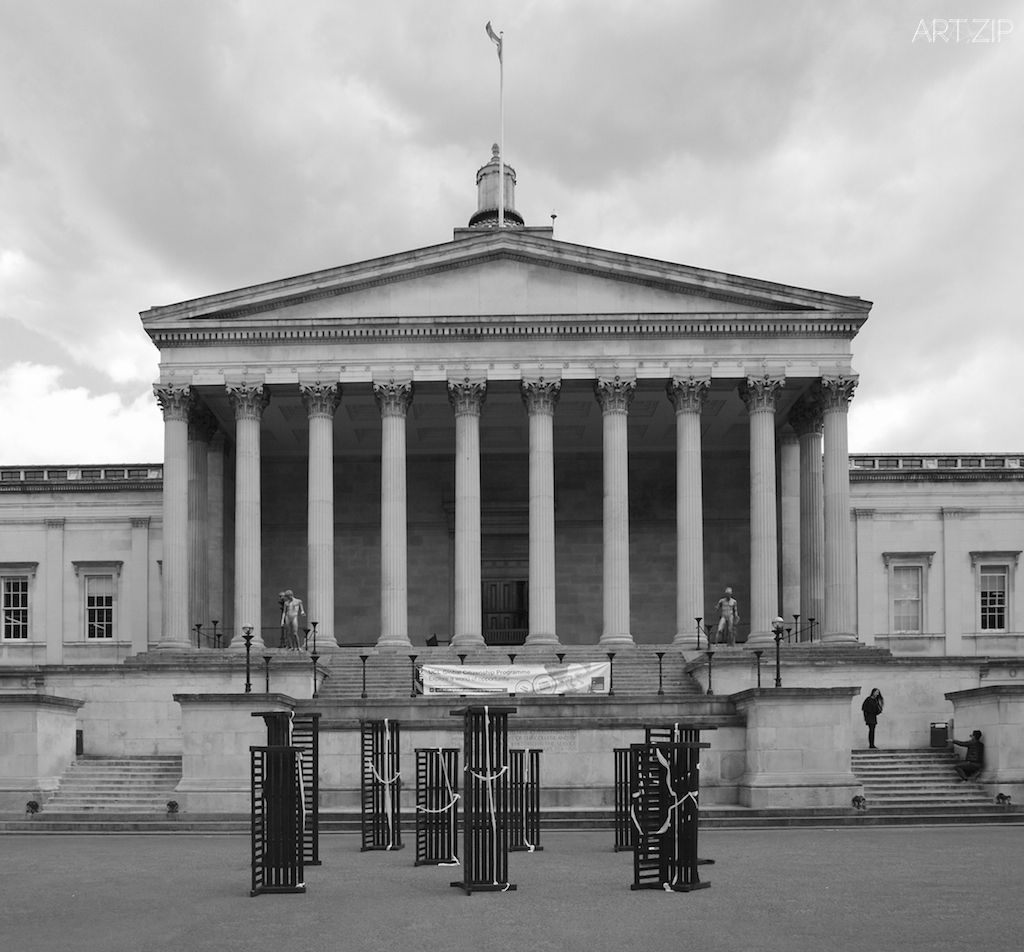 For his suspended newspaper works, where images are drawn out and (con)texts obliterated, Sun works on one side of the page, but the work, as he sees it, is on the other side. “That’s why I display them suspended, so people can see both sides. There are lots of possible interpretations of the work. For me, it’s about the news, every day life, the concept of copying, ideologies. But it really doesn’t matter – people can make their own interpretations. When I started making these works, I had no reason for using newspapers, in particular – it was just being playful. I have been asked what I have learnt from using them, but I haven’t got an answer to that yet. I don’t think I can learn things from art, or my art practice, in the same way that I can learn a language or learn knowledge. Art is a kind of passive learning, or a form of experiencing. It’s illumination.” 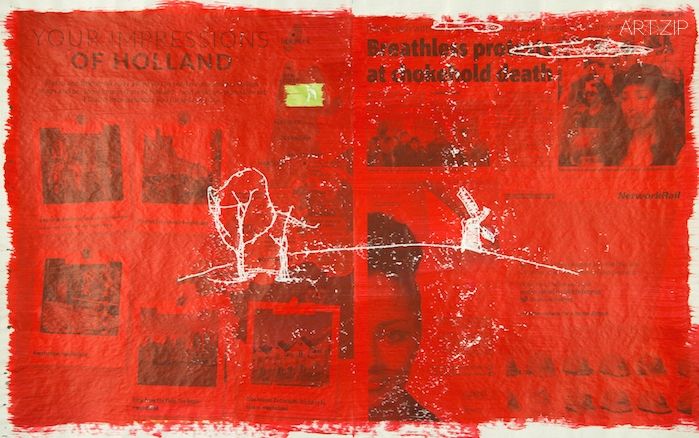 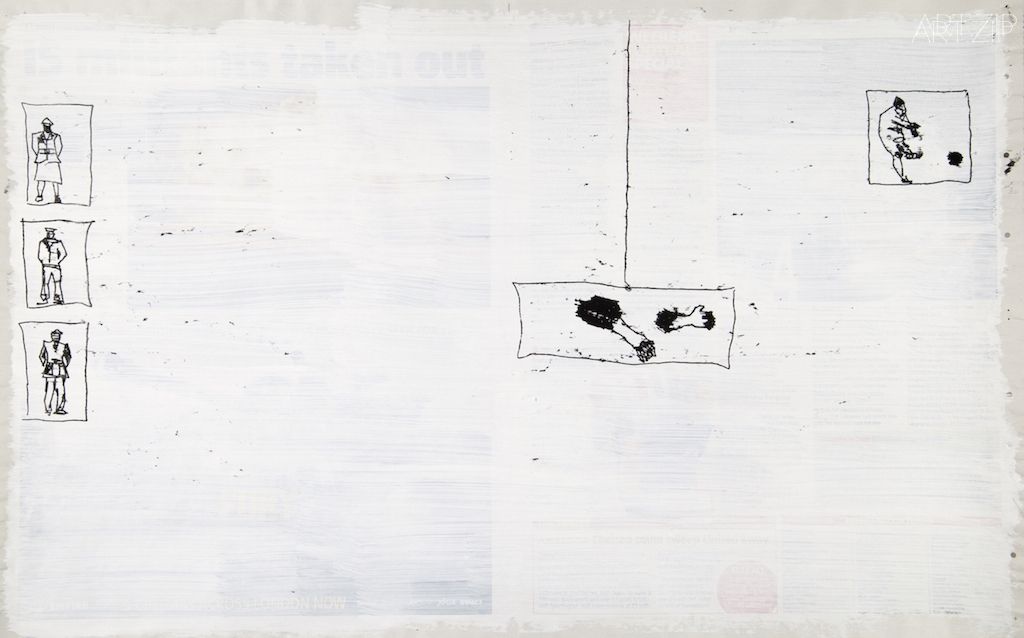 Sun is currently playing with the concept of 3D drawing, working with found wire, wood and nails. He sees drawing as much more than just pencil marks on paper. For example, he considers both Lucio Fontana’s slashed canvases and On Kawara’s time paintings to be drawings. “Drawing can also be a performance. Bas Jan Ader went cycling along the canal in Amsterdam and then fell into the river. That is like a drawing as well. Drawing, for me, is a big concept to develop.” But does it necessarily involve a line? “Yes. Always. And time.”

Sun grew up practising calligraphy from the age of five. “I don’t like to call Chinese calligraphy ‘calligraphy’,” he says, “because the translation is ‘writing principle’. I prefer to call it this. It’s about line. It can be art, in a way, but it’s about meaning too. There’s a practical side.” However, he describes his practice today as being “quite like Chinese calligraphy. We do it again and again to make it better; we practise it. I think artwork can be done in that way as well. You can add things or cut things out. Work can be generated at different times.” He will never make an exact copy of a work, however. He couldn’t, he says, because time, place and person have all changed. He could make a newer version, perhaps; something bigger; something brighter. Just not the same again. 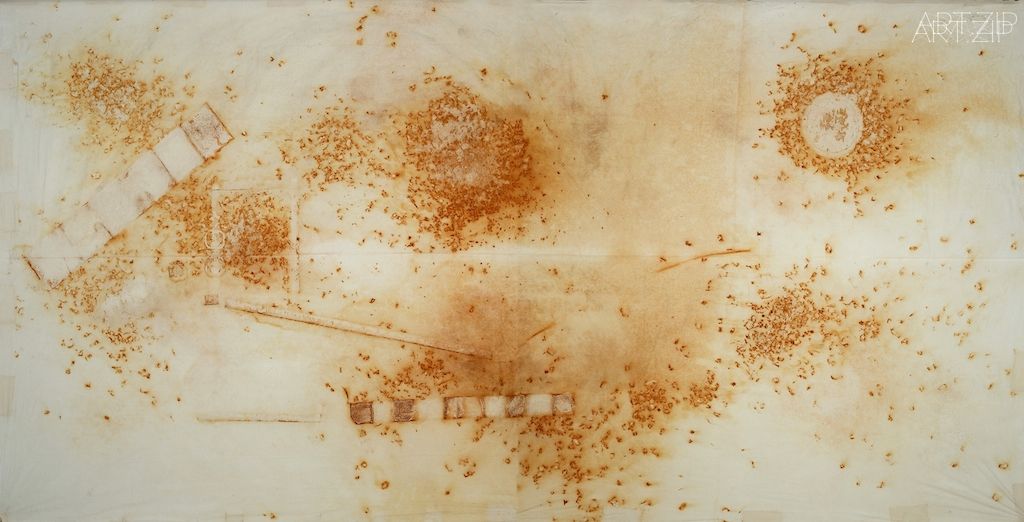 Sun studied for a BA in Painting at the Faculty of Oriental Art, NanKai University, Tianjin (2008-12). His was a small, independent department, with a class of just 10 students a year, and there was quite a Western skew to the training, which included outdoor and life painting, sketching and Western art history, but also calligraphy. In 2011, he spent six months in Spain as an exchange student and then he came to London – by way of a language course in Cambridge – to study at the Slade from 2013-15. London, actually, was Sun’s third choice. Initially he wanted to go to Paris, but was disappointed by the school, when he went to visit. Next came Berlin, but the language barrier was a problem. English, Sun felt, would be easier to master than German. That said – despite his fluent and very British English – Sun still claims to find the language a struggle. He originally applied for the MA course at the Slade, but moved to the MFA, as it required less written work – leaving, of course, beneficially more space for his actual art practice. Sun nevertheless enjoyed the course’s set reading – and responded with plenty of writing. “It just wasn’t in English,” he smiles.

Sun is actually an avid poet. “Our life needs poems, nowadays,” he explains. “Especially in China. We’re very busy in the city and life is quite tough and relationships are difficult. We’re losing things from human nature. A poem can be a very pure sensation. It’s like a reaction to the physical world. It’s a way to express things. I think the word is much more immediate than the artwork to communicate what you want to say, but it also can confuse people.”

Later this autumn, Sun will return to China, before heading stateside to further his studies. Where exactly, he’s not yet sure, but “somewhere on the East Coast, possibly New York”. Ultimately, he intends to return to China and establish his studio there. After his time spent in the West, does his work still have an Oriental influence to it? “Yes, of course,” Sun replies. “It’s not really changed a lot since coming to the UK. I can’t change my DNA. Now it’s a cross-fertilised cultural field – but I can’t give up the Eastern influence.”