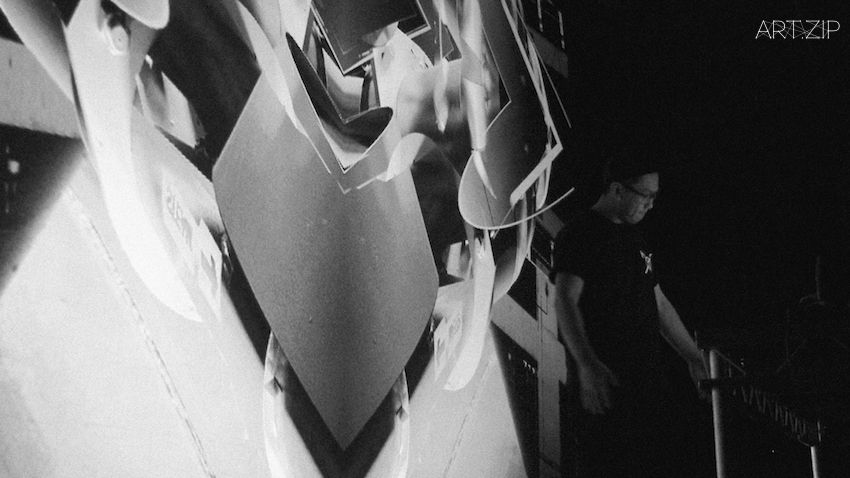 Cryptic Associates Kathy Hinde, Robbie Thomson and Mark Lyken, will be joined by NORTH of X (Sisi Lu) for a Sonica weekend of immersive live performances and sonic installations, operating at the boundary where visual art meets music.

Cryptic Director and Sonica curator Cathie Boyd said:
“I’m delighted to be able to bring a slice of Sonica to London for the first time. These four artists are some of the freshest and most exciting talents out there. At Cryptic, we’ve always been interested in presenting music visually, and Sonica is as much about visual art with a sonic element, as visually exciting sonic art. What we’re presenting is a series of incredible, immersive experiences for audiences which will ravish the senses”.

.
Kathy Hinde’s music merges machinery and natural stimuli to create stunning sound and visual aesthetics.Tipping Point is both a sound sculpture and a musical instrument, which explores the sonic complexities and possibilities of combining glass vessels with shifting water levels. As the water ebbs and flows, microphones inside each vessel feed back live sounds tuned to different pitches, creating a mesmerising spectrum of sound tones. During live performances, Tipping Point becomes akin to a glass harmonium as Hinde intervenes electronically, manipulating water levels and pitch tunings.

Installation: Fri 5 Feb, 6pm – 10pm // Sat 6 Feb, 2pm – 10pm
Performances: Fri 5 Feb, 7pm & 7.30pm // Sat 6 Feb, 3pm, 4pm, 7pm, 7.30pm & 9pm
.
Robbie Thomson started off studying environmental art at Glasgow School of Art before integrating light and sound into his prototypes. For Sonica at Kings Place he presents two works. XFRMR is an electrifying light performance that uses music technology to conduct a caged and spitting tesla coil. A sensation at the 2012 Edinburgh Fringe it has since captivated audiences at club nights. The New Alps is Thomson’s latest installation, an immersive dystopian landscape of motorized mechanical sculptures brought to life with machine-powered choreography. Inspired by such monumental interventions as mining and damming and the manufactured landscapes they have created, this is a soundscape for our time.
The New Alps: Fri 5 Feb, 6pm – 10pm // Sat 6 Feb, 2pm – 10pm
XFRMR Saturday, 6 February 2016 – 9:30pm / Hall One
.
Award-winning artist, composer and filmmaker Mark Lyken presents two contrasting audio-visual works for Sonica at Kings Place. The Terrestrial Sea is a bio-acoustic experiment and a quietly beautiful film, which explores the ever-changing environments of the Cromarty Firth, Scotland. Oscillon Response is Lyken’s latest composition and homage to Ben F. Laposky, the forefather of Electronic Art. Working in collaboration with Sanford Museum, Iowa, and responding to a selection of six strikingly different photographic works by Laposky, Lyken has captured their complex, rhythmic waveforms in six sound works. The performance is accompanied by new images created using the original process developed by Laposky.
The Terrestrial Sea: Friday, 5 February 2016 – 8:00pm / Hall One
Oscillon Response: Saturday, 6 February 2016 – 8:00pm / Hall One
.
The Age of Digital / Analogue, NORTH OF X (Sisi Lu) is a cinematic journey that combines live performance with digital modes of expression. Using elements of pop culture, music, film and sound design, this is a story of contrasts where the physical and digital complement and enhance one another. The spectacular series of music and visuals examines the artist’s own relationship with Inner Mongolia and his adopted Europe, old and new industries and landscape. Sisi Lu was awarded a 2013 Sky Academy Arts Scholarship to create The Age of Digital / Analogue.
The Age of Digital / Analogue, 5 February 2016 – 9:30pm / Hall One
.
.
Tickets & Booking:
Free access to all installations
£16.50 – one evening performance + access to all installations
£24.50 Day Pass – two evening performances + access to all installations
£36 Festival Pass – all performances on Fri/Sat + access to all installations
. 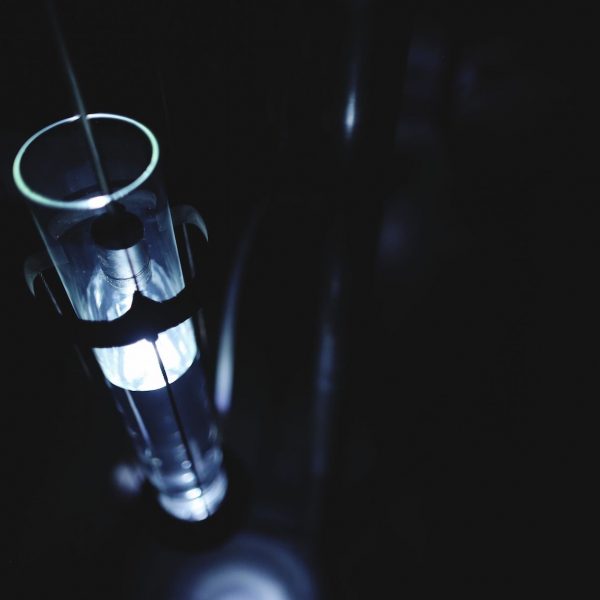 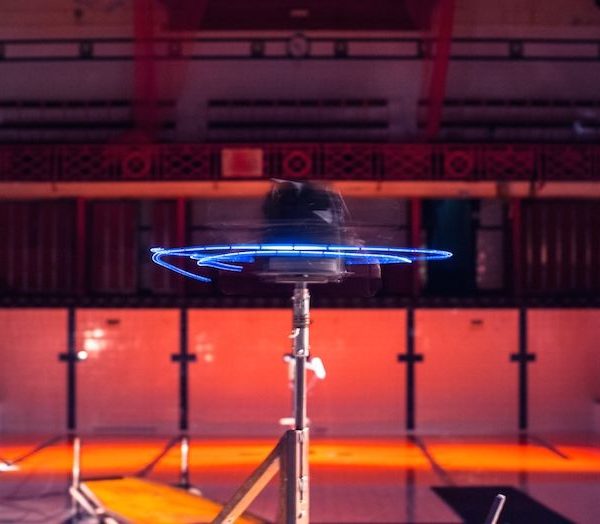 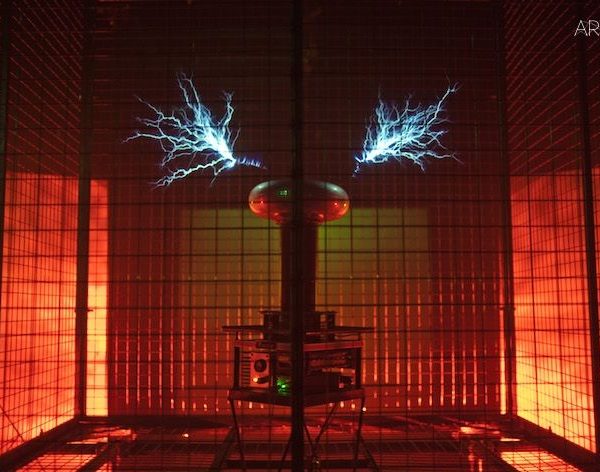 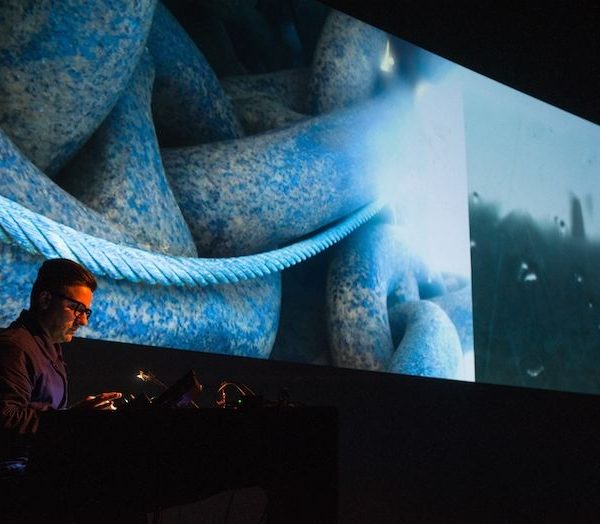 About the Artists:
Kathy Hinde
Kathy Hinde has created video and sound for theatre and live performance alongside making audio-visual installations and site specific sound sculptures. The only UK artist to receive an honorary mention for 2015’s Prix Ars Electronica, her approach combines different art forms, often through collaborations with other practitioners and scientists.
.
Frequently inspired by the natural world, much of her work explores our relationship to nature, mediated by various technological interventions. Her use of open scores, graphic scores and chance procedures results in work that is generative; that evolves; that can be different each time it is experienced. She performs with adapted or self-made instruments, has created works combining kinetic sculpture with musical automata in addition to a number of participatory online sound maps.
.
Hinde is keen to share her creative process, and regularly makes artworks that rely on input from the audience. She has shown work across Europe, Scandinavia, China, Pakistan, USA, Colombia and Brazil. Previous and current collaborators are many and include:  Joanna MacGregor, Maja Ratkje, Gabriel Prokofiev, Joby Burgess and Will Gregory.
.
Mark Lyken
Mark Lyken is a composer and visual artist based in Glasgow, who creates musical and sound works, film, paintings and installations.
.
Lyken’s work is inspired by the relationship between nature, culture and technology and the ways in which digital existence may be reconciled with the “soul” of analogue mediums.  A desire for a more physical connection with his audio work has led a move away from computer based composition and a return to hardware equipment with a focus on live performance.
Collaborations with artists and scientists, including film-maker Emma Dove and research scientists from the University of Aberdeen’s School of Biological Sciences, have led to environmental and field recordings becoming an important part of his sonic palette.
Robbie Thomson
Originally from the North East of Scotland, Thomson studied at Glasgow School of Art. His work incorporates sculpture, music and technology and investigates the interplay of technology with human situations and the natural world. His work has been shown at CCA, The Whisky Bond, The Arches, Tramway and Transmission, Glasgow, The Woodmill, London and Festival De Kreuze, Netherlands.
.
North of X (Sisi Lu)
Award-winning artist NORTH OF X’S [Sisi Lu] work combines electronic music, film and live performance. Originally from Inner Mongolia, China, he came to the UK in 2007 to study at Glasgow School of Art and is now based in London. His awards include a Gold Medal at the 2011 New York Festival and a Sky Academy Arts Scholarship to develop his latest project, The Age of Digital / Analogue. His work has been showcased at a number of festivals including the Glasgow Short Film Festival. He has also produced work for BBC, Sky Arts and has been the creative director and composer for multiple Haizhen Wang London and Shanghai Fashion Weekends.
.
.
—
A special price is announced now of £9.50 for online booking! Limited tickets only
http://tracking.wordfly.com/view/?sid=MjEwXzMwMTdfNF83MDY5&l=022f1b44-9cb4-e511-bb2d-e41f1345a46a&utm_source=wordfly&utm_medium=email&utm_campaign=1601W-Contemporary%28Non-Minimalism%29&utm_content=version_A&sourceNumber=