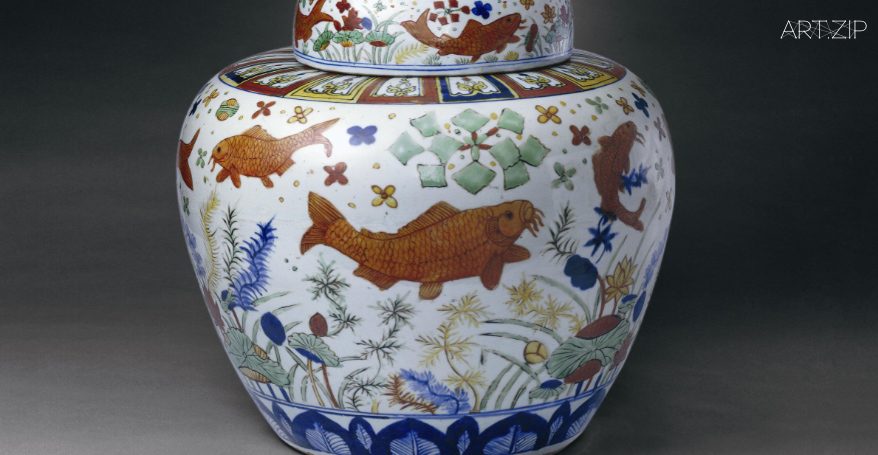 China is attaching increasing significance to cultural heritage, while new archaeological discoveries continually emerge from land and from shipwreck sites in the sea. As a result, museums across the country are launching a large number of new exhibitions on a regular basis. A major one was just held at the Palace Museum, Beijing, entitled Porcelain of the Ming Imperial Kilns: Comparing Wares of the Jiajing, Longqing, and Wanli Reigns from the Imperial Kiln Site of Jingdezhen and the Palace Museum Collection. Jointly organised by the Palace Museum and the Jingdezhen Municipal Institute of Ceramic Archaeology, the exhibition was the last of a series of six similar exhibitions by the two parties since 2015 that featured Ming imperial porcelains from the Ming-Qing collection of the Museum and fragments or reconstructed pieces excavated from their kiln site in Jingdezhen over the past three decades.

Take two exhibitions held at the Museum for example. One featured Ming and Qing imperial porcelain from the imperial kiln site in Jingdezhen, and from a pit inside the Palace Museum that was excavated in 2014 and seems to have been used by the imperial court of the Forbidden City to bury porcelains broken from use. The exhibition was accompanied with the catalogue The Porcelain of Imperial Kiln in Ming and Qing Dynasties: The New Achievements in Ceramic Archaeology of the Palace Museum and Jingdezhen (Beijing, 2016). The other exhibition, held in 2018, focused on porcelains of the so-called Interregnum period, namely the Zhengtong (1436-49), Jingtai (1450-57), and Tianshun (1457-64) reigns. This was a period of political turmoil. Unlike the preceding Xuande reign and later reigns, imperial porcelains from the Interregnum period bear no reign marks, and are thus difficult to identify. As a result, for a long time only a few examples have been discovered and/or identified either from the imperial kiln site or from the imperial collection now in the two Palace Museums in Beijing and Taipei, and thus this period came to be referred to as a ‘blank period’ or ‘dark period’. However, it is hard to believe that the imperial kilns and a large number of private kilns in Jingdezhen stopped firing porcelain and that the imperial court andcommoners stopped using its products completely, and a few historical records do indicate otherwise. As a matter of fact, porcelain from this period has continued to be found at kiln sites in the past decades, as well as at tombs of Ming princes, such as those in Hubei. In 2012, supported by the Jingdezhen Municipal Institute of Ceramic Archaeology, the exhibition Filling the Interregnum: Ming Mid-15th Century Ceramics from Jingdezhen held at the Art Museum, The Chinese University of Hong Kong (CUHK), featured the Museum’s own collection and kiln site finds from Jingdezhen. Two years later, in 2014, an unprecedented number of imperial porcelain objects dated to these Interregnum reigns (from stratigraphy and stylistic analysis, etc.) were found at kiln sites in Jingdezhen, including extremely rare types such as blue-and-white pillows, drum-shaped garden stools, and flowerpots. 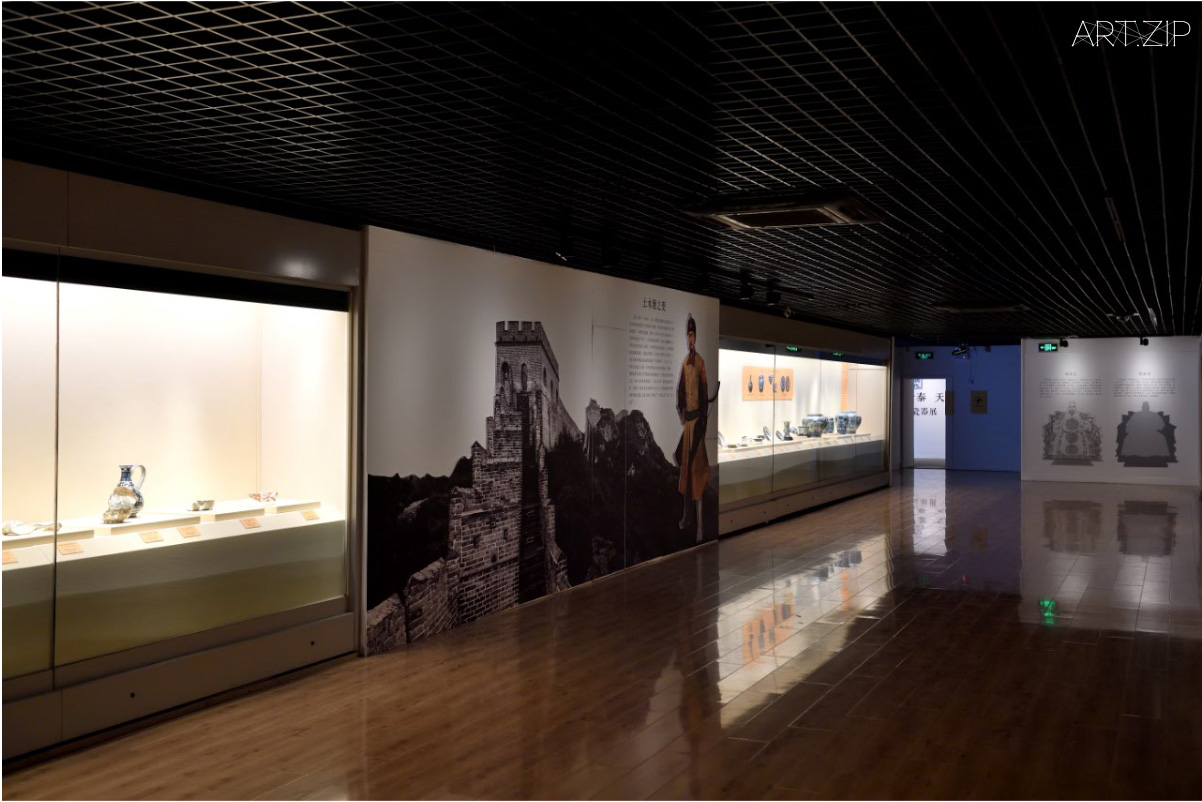 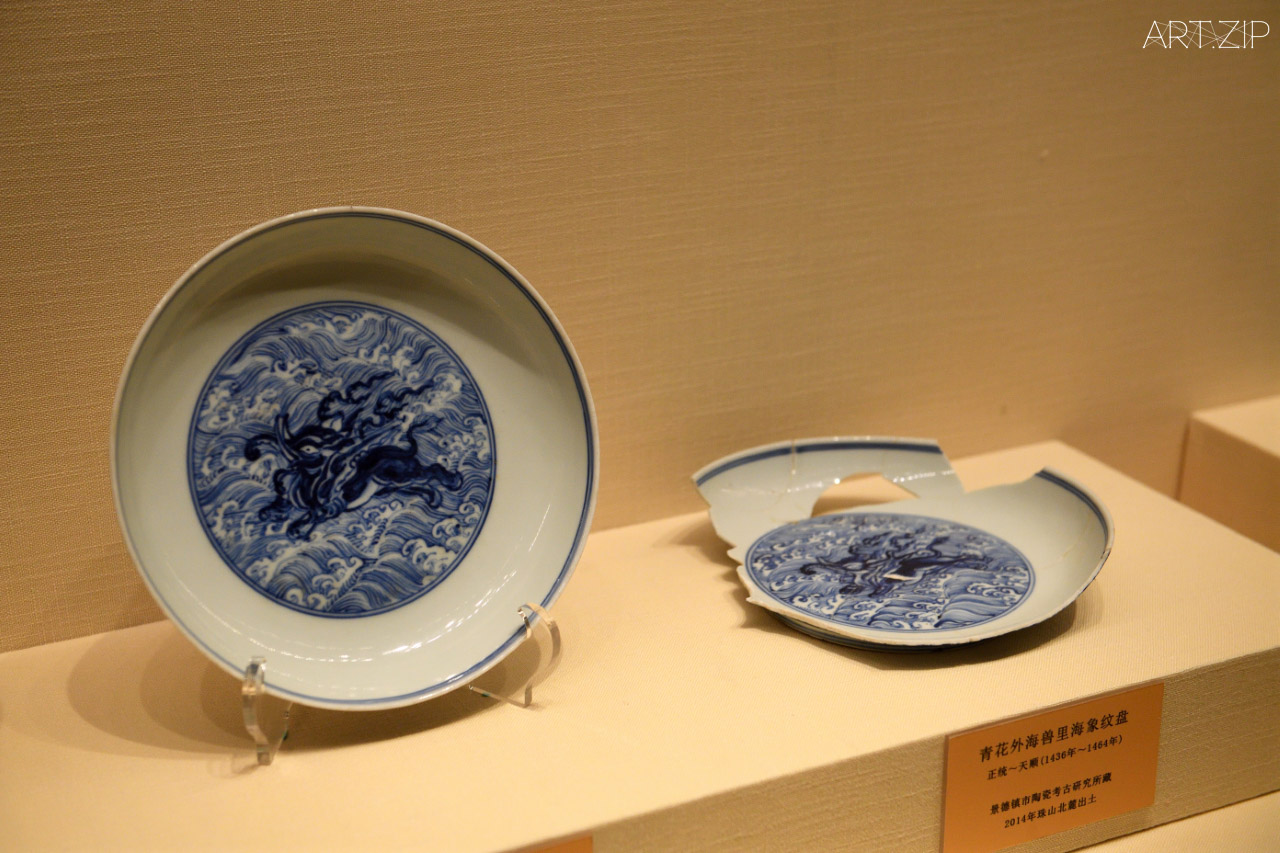 This unexpected major discovery lead to an exhibition at the Palace Museum that was held in May-June, 2018 (fig. 1), followed in September- December 2018 by an exhibition of a similar topic at the CUHK (fig. 2). Another major exhibition on this subject is being held at the Shanghai Museum, 28 May – 1 September 2019. 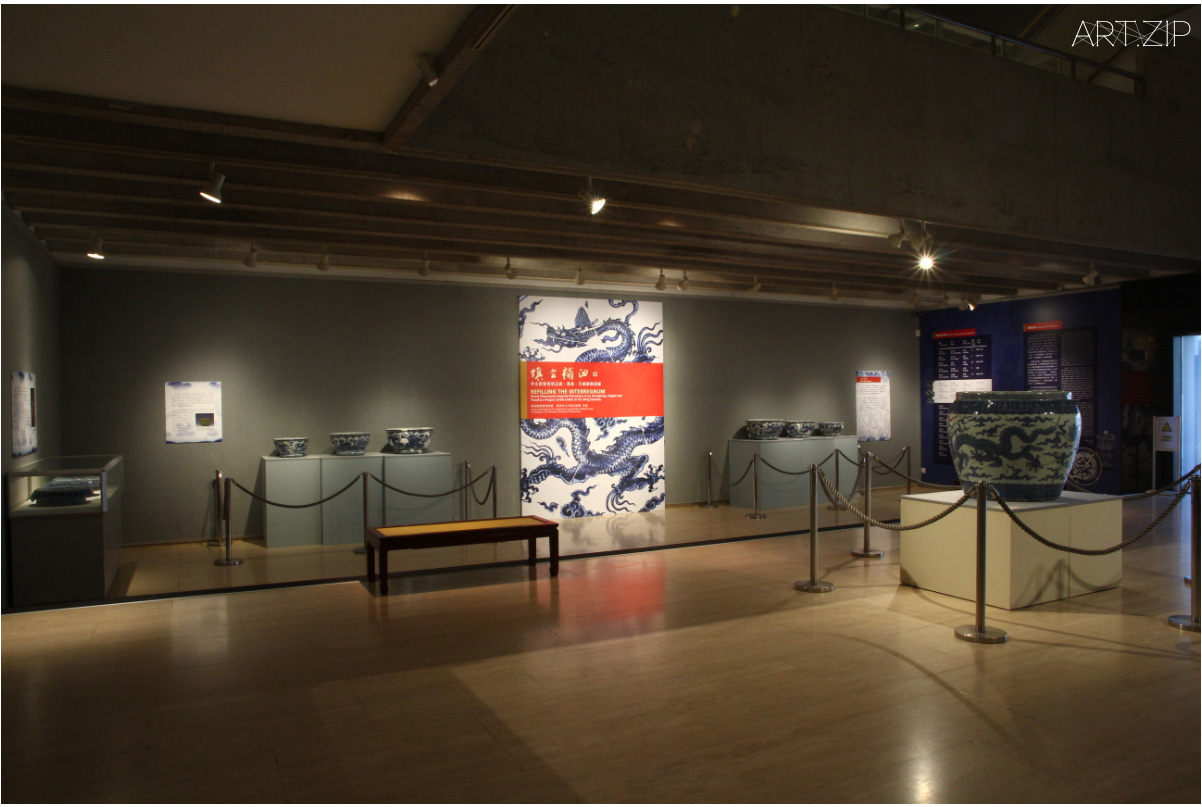 This exhibition includes about 280 pieces from museums across China and a few organisations in Japan and USA, and features better-reconstructed pieces from kiln site, and those found from Ming prince’s tombs China wide (figs. 3a and 3c).Reconstructing the large number of fragments from the kiln site discoveries of 2014 is obviously a challenging process that will go on for long in Jingdezhen (fig. 3b), as the author and Prof. Nigel Wood observed at the Imperial Kiln Museum, Jingdezhen in October 2018. 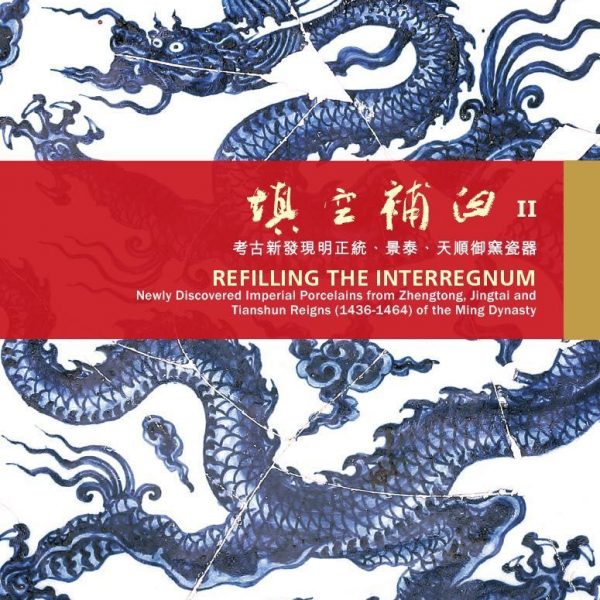 Fig 2b. Catalogue of the exhibition at the CUHK, edited by its curator Dr. Wang Guanyu, Hong Kong, 2019. 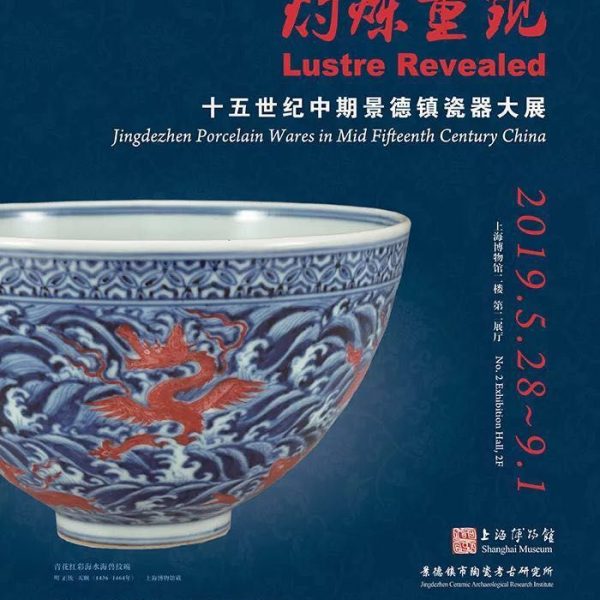 Fig. 3a. Lustre Revealed: Jingdezhen Porcelain Wares in Mid Fifteenth Century China, Shanghai Museum, 28 May – 1 September 2019. The exhibition is accompanied with a catalogue. 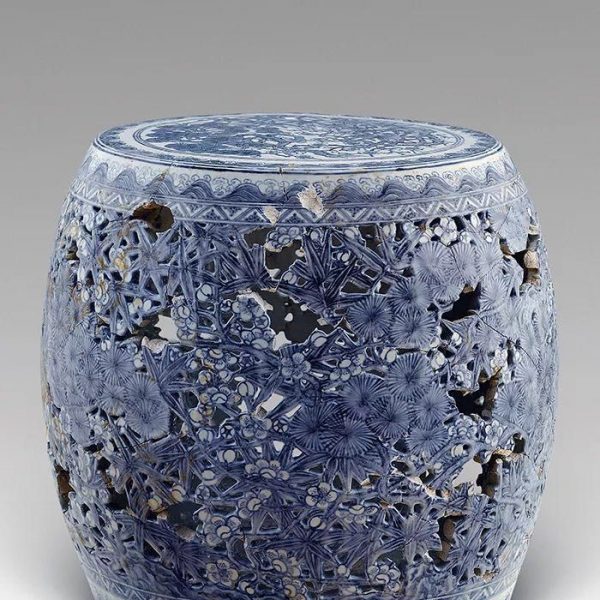 Compared with Interregnum wares, the porcelains featured in the exhibition of the Jiajing (1522- 66), Longqing (1567-72) and Wanli (1573-1620) reigns have been much better known, even though there are still numerous questions to answer. This exhibition featured about 300 objects (or sets) from these periods, as well as a small number of copies made in the Qing dynasty or the Republic period. These are illustrated in a catalogue, with Lü Chenglong and Jiang Jianxin from the two organisations as chief editors (fig. 4a). Object types were wide ranging, including ritual or religious items (fig. 4b), vessels for eating, drink and storage, studio pieces, display or leisure items such as chess boards and cricket cages, etc. The beauty and technological achievements (by then standard) of these objects are fascinating in themselves.

Fig 4a. First of the two-volume catalogue of the exhibition of porcelain of the Jiajing, Longqing and Wanli periods at the Palace Museum, Beijing, November 2018-February 2019. Chief editors Profs. Lü Chenglong and Jiang Jianxin.

Fig 4b. Ritual vessel dou (stem plate) with cover and iron-red glaze made for the Altar of Sun in the Jiajing period (1522-66), unearthed with fragments of same vessel shape with other glaze colours of blue, yellow and white, as sacrificial wares for respective altars in Beijing.

Noteworthy objects include an extraordinarily large pair of Wanli-marked meiping (‘prunus vases’) (fig. 4c). Different from other exhibition objects from the Museum, these meiping were not heirloom pieces. They were recovered from the celebrated Dingling mausoleum of the Wanli Emperor near Beijing. Meiping are among the most elegant and interesting Chinese ceramic vessel shapes, first made as wine containers but eventually becoming flower vases. This form, featuring an elongated body and small mouth, was produced in China for about a thousand years. They are of variable sizes but the pair from Dingling is extraordinarily large, and may have been placed in the mausoleum as part of fengshui (Chinese geomancy) practice. 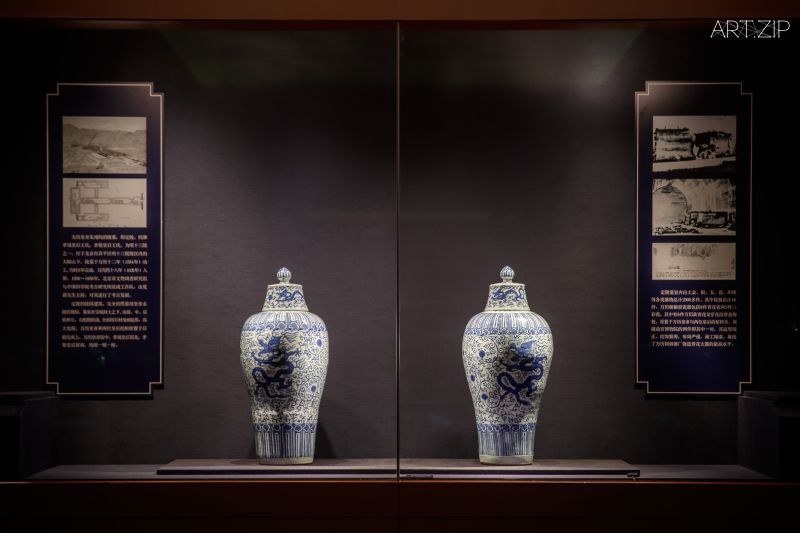 Fig 4c. Pair of meiping bearing a Wanli mark (1573-1620), excavated in 1956 from the
Dingling mausoleum of the Wanli Emperor, now in the collection of the Palace Museum.
Height: 72 and 73 cm. Photo courtesy of Prof. Lü Chenglong, the Palace Museum, Beijing.

Meiping vases first appeared in the Song period, when they served as the primary type of wine container and were made in great variety by nearly all the famous kilns across China. In contemporary mural paintings they are frequently illustrated in feast scenes. In the Ming dynasty meiping continued to function as wine vessels, but began already to be used for holding flowers. In addition, and more importantly, they also served as ceremonial vessels and were placed in the tombs of Ming Emperors, princes, aristocrats and high-ranking generals across China that spanned the whole dynasty. By the Qing dynasty meiping seemed to stop its use as wine containers or ritual vessels in tombs, and were used primarily as flower vases or display items, as demonstrated in a few paintings, such as one by the court painter Giuseppe Castiglione (1688-1766). In a poem of 1790 about a long-necked vase from the Song dynasty (960-1279), the Qianlong Emperor proclaimed ‘Used to contain wine in ancient times, the vase is now holding flowers, clearly flowers and wine belong to the same family’. The two lines could equally have been written about meiping vases, which underwent the same change of function. Although meiping were used to hold various kinds of flowers, ‘prunus vase’ became the standard name for this vessel. This may be because the narrow mouth is perfectly suited for holding the slender prunus branches, or perhaps because prunus, due to its winter- resistant beauty, is one of the best-loved flowers in China, symbolising righteous personality sustained even in harsh conditions.

It’s in this historical context that the meiping vases from Dingling are of particular interest. A total of eight large covered blue-and-white meiping have been recovered from the mausoleum. Four of them came from the Emperor’s funeral chamber, and two pairs came from those of his two Empresses. Two, measuring about 45 cm in height, bear a mark of the Jiajing period and are decorated with floral motifs. The other six meiping, ranging from about 71 to 75 cm in height, bear a mark of the Wanli period and a dragon motif. They probably had been placed in the mausoleum as fengshui vases, like those found in other Ming tombs across China. However, we are yet to completely figure out how and why this funerary custom of placing meiping in elite tombs formed during the Ming and then disappeared in the Qing when the Manchu people ruled China. It is also still unclear for what purpose the colossal Wanli-marked meiping were made. Were they made specifically for burials (it is common for Chinese people to start preparing key funerary objects years before death)? Or more likely, were they meant for use in real life at the court (as wine containers or display items, etc.), but eventually ended up as fengshui vases in the mausoleum? Answers to such questions would help us to understand how the Chinese treated life, art, rituals and funerals, and may be better answered by collective efforts of both archaeologists and curators. 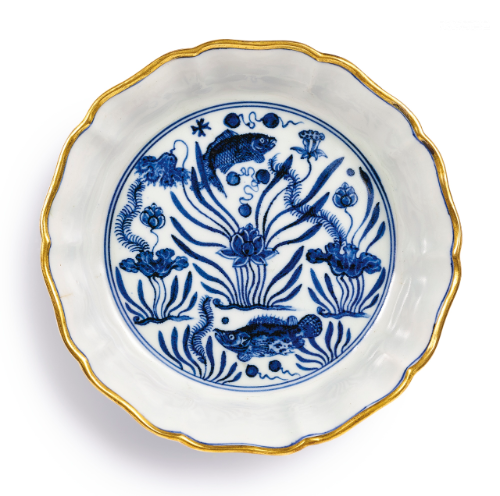 In view of the multiple significance and everlasting beauty of Ming porcelain (fig. 5), a few important works in Europe devoted to this subject should be highlighted here. Examples include: Jessica Harrison-Hall, Catalogue of Late Yuan and Ming Ceramics in the British Museum, the British Museum Press, 2001 (long out of print, though Chinese edition大英博物 館藏中國明代陶瓷 revised by the author and proofread jointly with Lü Chenglong is available, two volumes, Forbidden City Press, 2014); Kraak Porcelain: The Rise of Global Trade in the Late 16th and Early 17th Centuries, introduction and entries by Teresa Canepa, Jorge Welsh Books, 2008; Stacey Pierson, From Object to Concept: Global Consumption and the Transformation of Ming Porcelain, Hong Kong University Press, 2013; Eva Ströber, MING! Porcelain for a Globalised Trade, Keramiekmuseum Princessehof, 2013; The Pilkington Collection of Chinese Art, featuring Ming porcelain, most articles or entries written by Regina Krahl, a few by the author, Sotheby’s Hong Kong, April 2016. 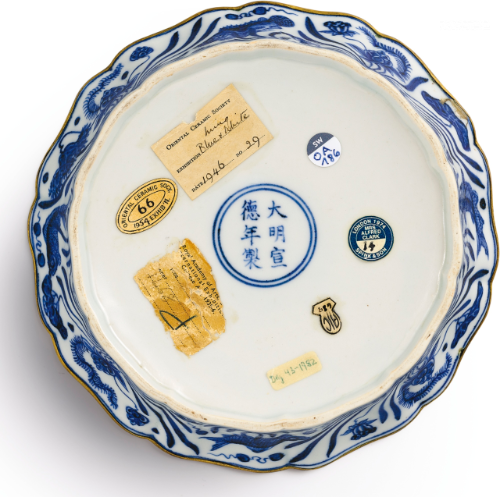 More materials could be found in the ongoing series of Recent Researches and Exhibitions on Ming Dynasty Porcelain Outside China by the author, published online in Chinese (e.g., Part IV: https://www.artzip.org/researches-exhibitions-ming-dynasty-porcelain-china4). The Transactions of the Oriental Ceramic Society and the Newsletter of the Society are also valuable sources of materials on Ming porcelain, and indeed any areas of Asia ceramics in history.