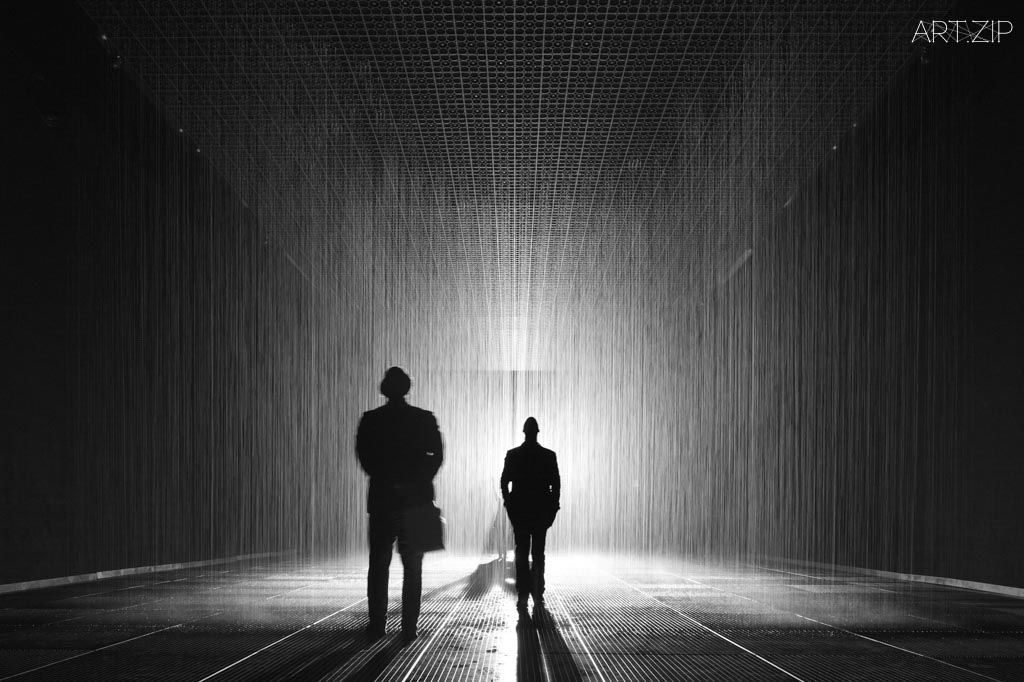 Collaborative studio rAndom International are most famous for their Rain Room installation. This work enchanted viewers first at the Barbican in London and subsequently at MoMA in New York, Yuz Museum in Shanghai and LACMA in Los Angeles. Led by duo Florian Ortkrass and Hannes Koch, the team blend science and art in their investigations of the relationship between man and machine. The viewer, or rather participant, has an emphasized role in the work. These extraordinary works are unleashed upon the world ready and yearning for human interaction.

As well as continuing to tour Rain Room, the studio are planning ever-bolder works partially informed by their recent residency at Harvard, enabled by Le Laboratoire. One of these is Study for Fifteen Points, which explores how little visual information is needed for the human brain to perceive a human form.

Visiting their main studio at The Old Warehouse in London, we discussed the success of Rain Room and how it’s approached by different audiences, and also the terms like ‘digital art’ in the contemporary landscape towards less restrictive interdisciplinary practices. 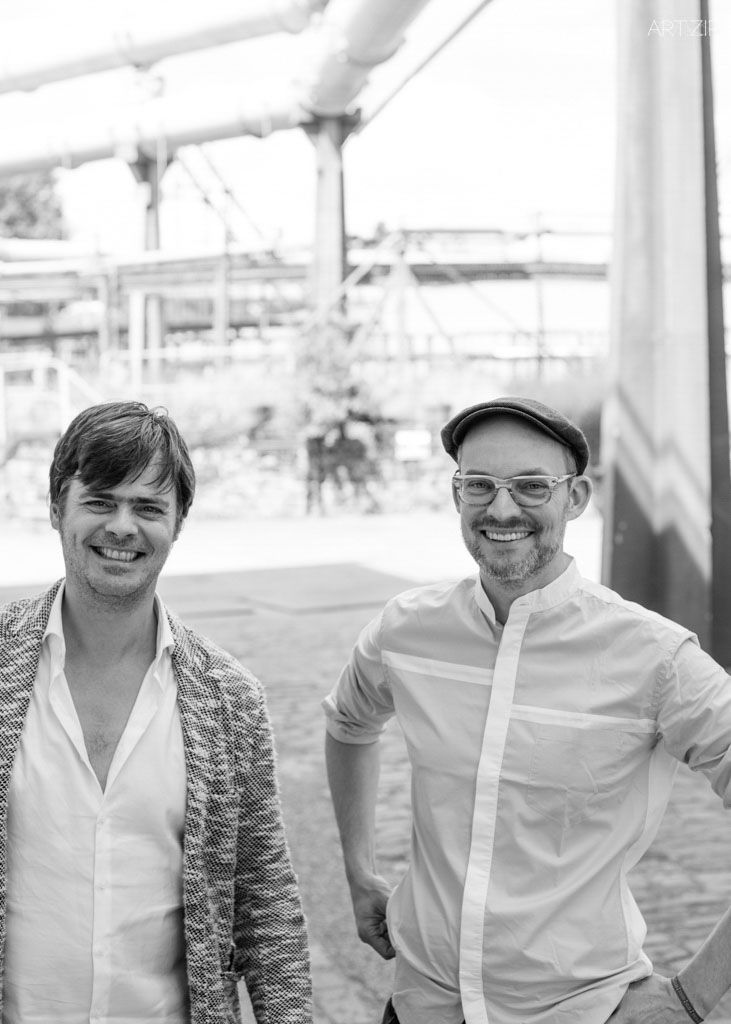 ART.ZIP: How did rAndom International start?

RI: We met at Brunel University in 1998, at one of their campuses west of here near Winsor, on a hill. It was a bit like a monastery. In the last year we, individually, had pieces in exhibitions. We thought: “why don’t we join forces?” That’s when we came up with the name, because we were doing all different things, plus we were very intrigued by the word random. There’s no direct translation into German, or there is a translation but it usually has a negative connotation. We went to do our Masters degree at the Royal College of Art, again working in several projects, both at the college and externally, together. We finished the RCA and we incorporated the studio in 2005.

It started out as this collective umbrella. We did our first actual Random project, where we worked together under that name, at the Valencia Biennale in 2003. We had already been working together on our respective individual projects, but there our complementary skills and interests really became something bigger and more focused. 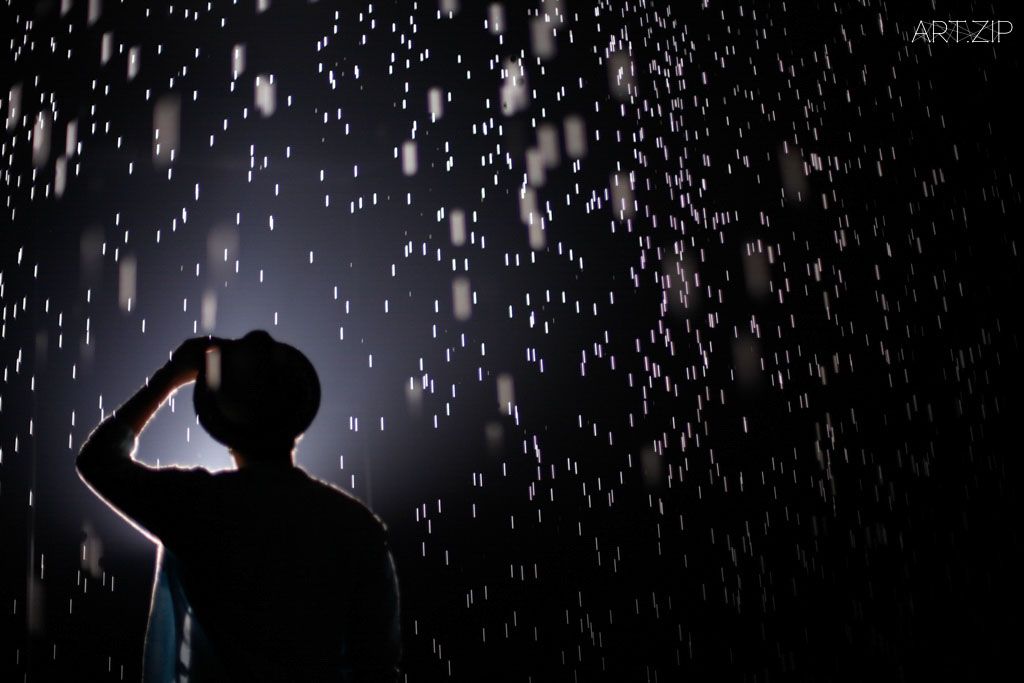 ART.ZIP: You’re most well known for the incredible Rain Room installation. Do you consider this your signature work? Do you still work with it or is it considered done and move on to the next work?

RI: Far from putting it to one side, it’s still very interesting and current within the practice, but it’s just one of the works. We wouldn’t have, in our wildest dreams, expected that sort of persistent public reaction to it. It is also, still to this day, not really guided by that. If anything, then we’re picky about when and how we show it, we can afford that due to the public success of it. There are other interesting bits in it that’s in development, we’ve got four more to make and we’re actively involved in every single one and they all will have permanent homes. We’re actively involved in making and finding those homes. I don’t see it as a done and dusted thing. 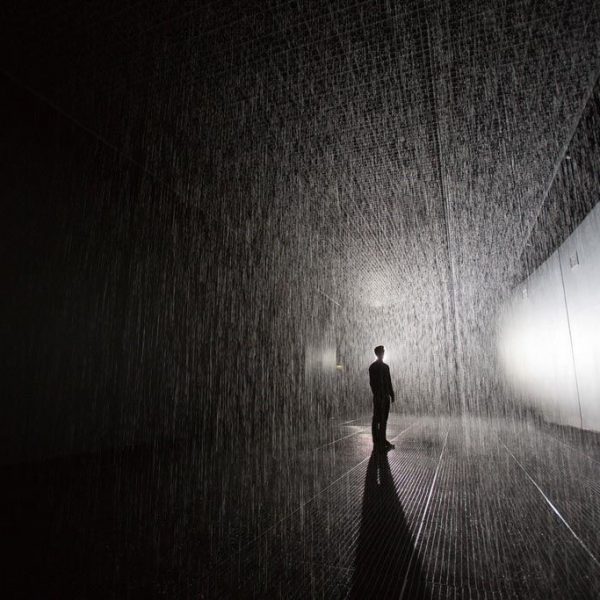 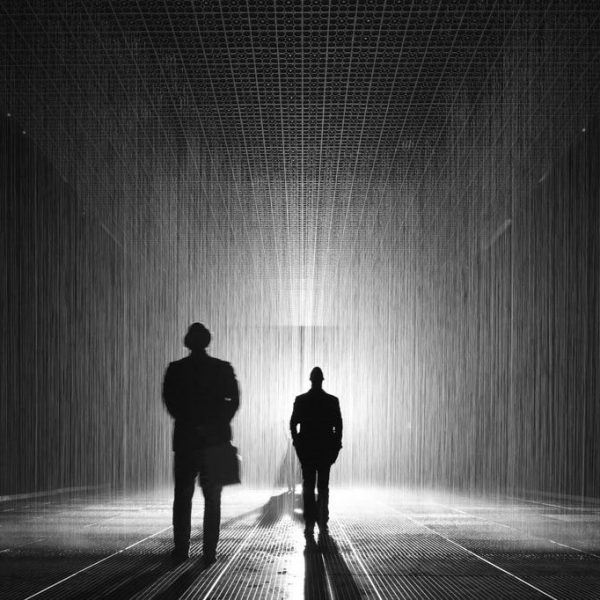 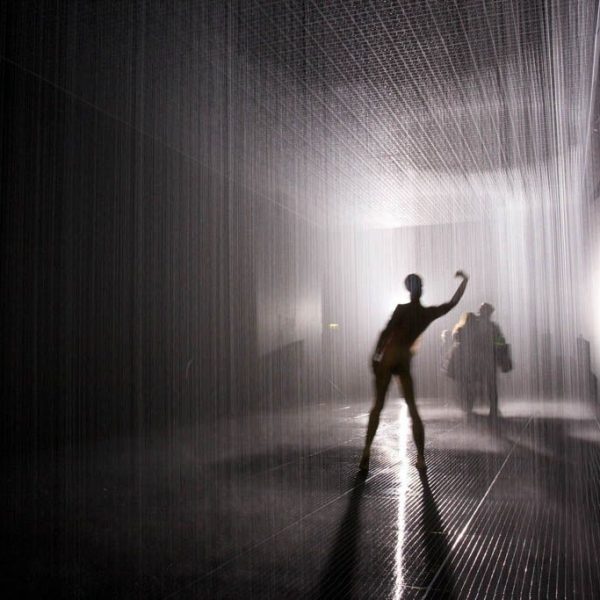 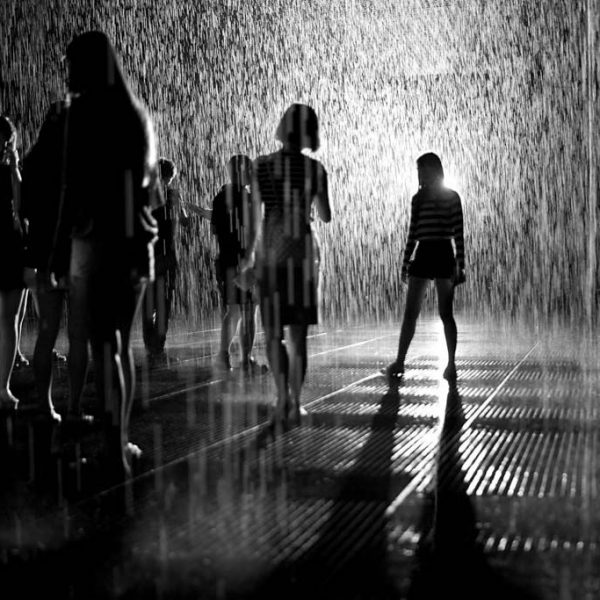 ART.ZIP: Your works use installation in order to study collective behaviour. Are the reactions that the Chinese audience had different to the ones experienced elsewhere?

RI: There was a strong difference yes. If you want to go into the specific Rain Room behaviour, the high-density population behaviour in China is very different from London or New York. In New York and London it was all about the individual experience, solitude. In China, people went in large groups, of 10 or 15 people, switching off half of the Rain Room by moving collectively. I wouldn’t say it defied the purpose, but I think next time we will set it up a little differently to take that into account. There was a very different collective behaviour, how people experience the work and themselves. It was 1 or 2 people at a time in LACMA and there were 15 or 20 people at a time, moving as a chunk in China.

That becomes manifest in Rain Room. I think the way people use it and experience it here reflects that. Here [London] you like to be in it alone and have it for yourself. That’s not a thing in China.

Initially we were thinking of one person in the Rain Room. If we had a different cultural background, we would have thought of it differently.

We would have probably made a completely different work. I wouldn’t argue that Rain Room doesn’t work in China. I think going forward, which is interesting when thinking of new work, that experience is definitely something that will remain. 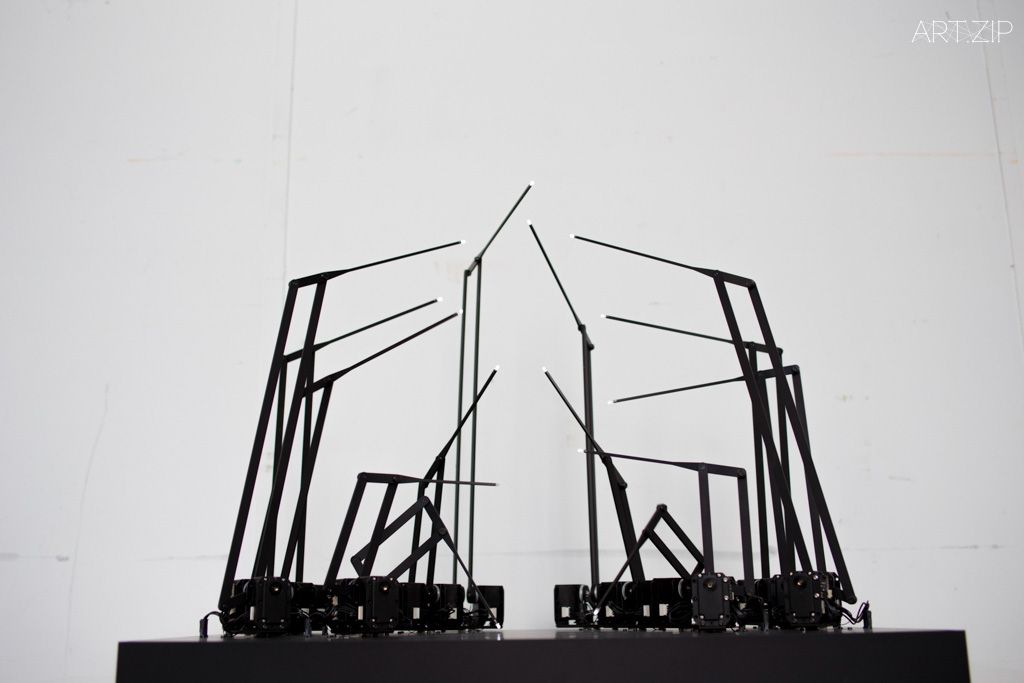 RI: At the moment, yes. It’s very much what it says: A Study for Fifteen Points. There’s a much larger work, a human sized work in production, which is going to be presented publicly at Menlow Park at PACE. This study and also our research and talks programme at Harvard at Le Lab is really serious. We are studying to what extent we can open the sculptural up for engagement, to what extent behavioural reactions are interesting or boring, and to what extend we can implement the motion of the viewer and whether that’s interesting. We’re really actively studying that, looking at the technical possibilities and, foremost, the conceptual implications. We don’t always see the need for interaction. I think our interpretation of the man/machine, viewer/object, viewer/environment relationship is much broader. There’s something powerful about the recognition of human motion and there is something potentially powerful about recognising yourself, but there’s something potentially one-liner-ish about it as well. We’re gagging to make sense of it and it’s not happening. The big one is going to go along 12-metre rails, it’s not going to be a study anymore, and it will be exuberant.

You can even scramble the movement up and the brain works hard to make sense of it, and in most cases can still see, that it’s still a human. We haven’t even touched that at the moment, we have the Fifteen Points. 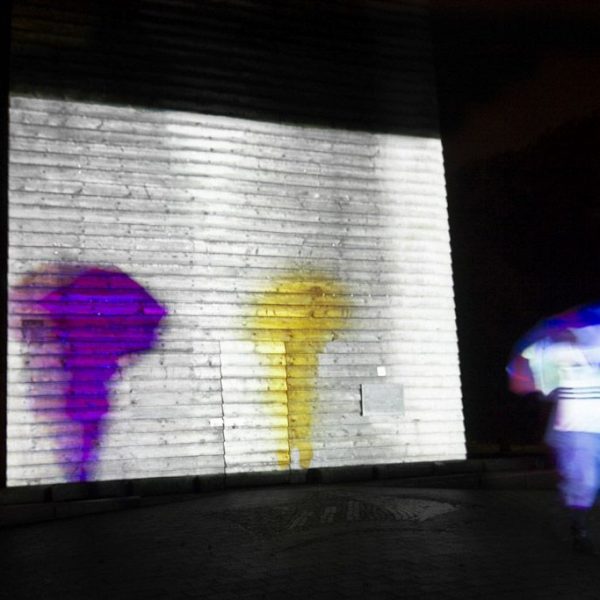 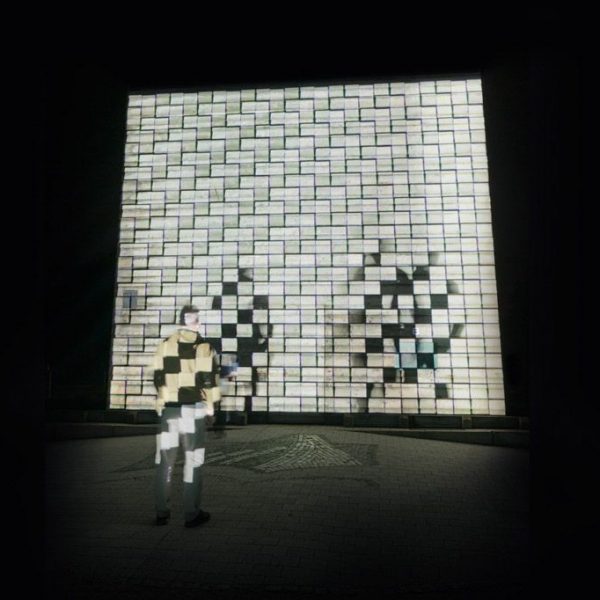 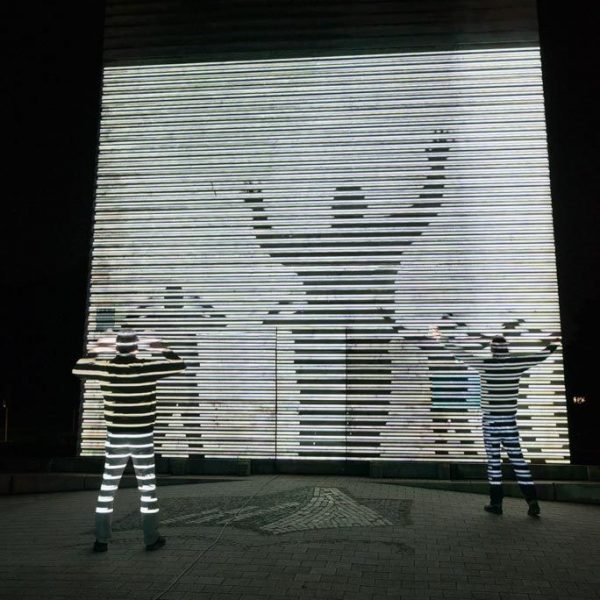 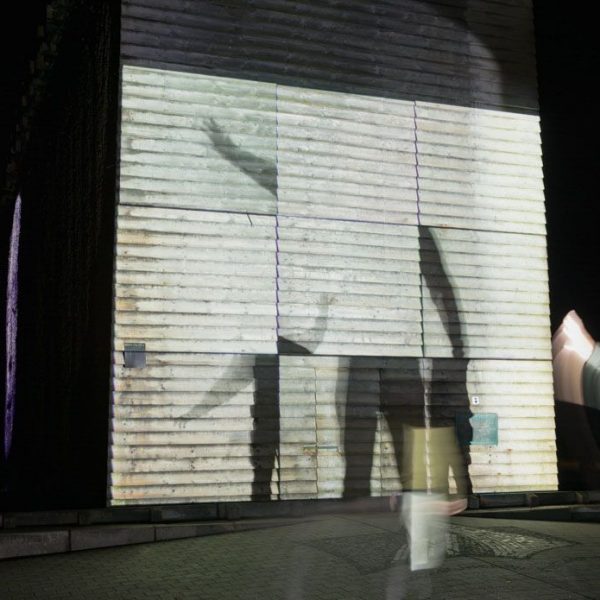 ART.ZIP: Digital art can be a dividing term, some people think it’s too broad or outdated, whilst others think there is no digital art, digital is merely a tool to use. Some would see it as constrictive, but it’s good to use such a decisive term to get passionate opinions. What’s your view?

RI: I think it cuts yourself short. By compartmentalising yourself, you limit yourself. I find it very unhelpful and irrelevant. Previously, if you wanted to show stuff that used digital or tech as art, you were in a limited number of spaces, like Ars Electronica. Now it’s not the same, with most people today, compartmentalising is really not a thing.

ART.ZIP: Most of the contemporary art we encounter is inter-disciplinary, with artists like yours, starting dialogues between different genres inside and outside of art. I know you’ve collaborated with dancers. What do you feel the benefits are from bringing in outside collaborators?

RI: Every time we do something it’s partially exciting because it’s new. The idea always comes first. Working with dance and Wayne McGregor for example, we didn’t really know anything about contemporary dance. It’s interesting how people use their body as a material and what is involved in that, including remembering an hour of choreography. I would have no idea how to start with that. That is really interesting, how people use the same engine to do very different things. In the work, there’s an appreciation that goes both ways.

There is appreciation and challenge. I think we make them do stuff that they would normally not do and likewise. So that creates a fairly rich ground. What touches me, is the contrast: the purity and humbleness of the body and then the restrained, but technically complex counterpart. That tension was great, especially with the way that Wayne choreographs, but also with normal people in front of the piece, as an extension to his suggestions. It is something that is really beautiful to watch. We wonder how it is that Wayne does what he does and how the dancers move like that do. I’m sure that some of that fuels this fascination for the body or movement, which ultimately come out in the Study for Fifteen Points or for what we’re showing for PACE. I’m sure that will fuel back and we will see what kinds of possibilities arise from exposing that work to choreography and what triggers that. It’s a ping-pong through different time frames or arches. Outside collaborators are really essential to the way we work.

It’s a bit like what we did in Harvard. We looked at how people work with different things, the in-depth knowledge or interest they have. It all comes back to the human body. If it’s within the field of robotics, then it’s how can robots work next to humans without the humans getting in the way and hurt. With every subject, you get a glimpse and get a different aspect of what it means to be human. 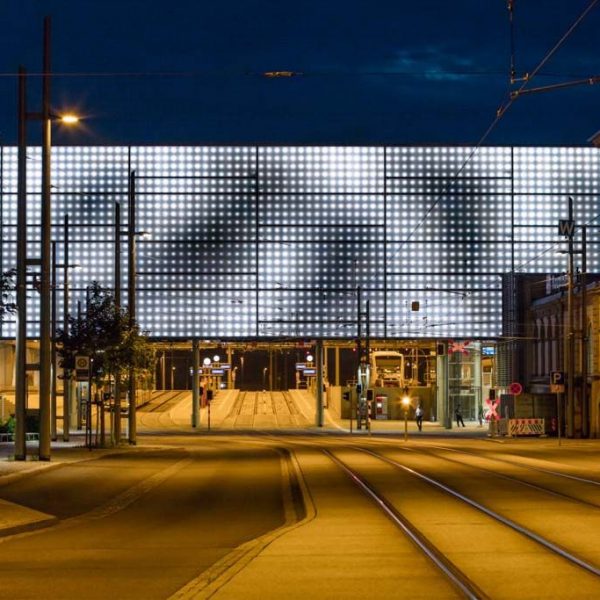 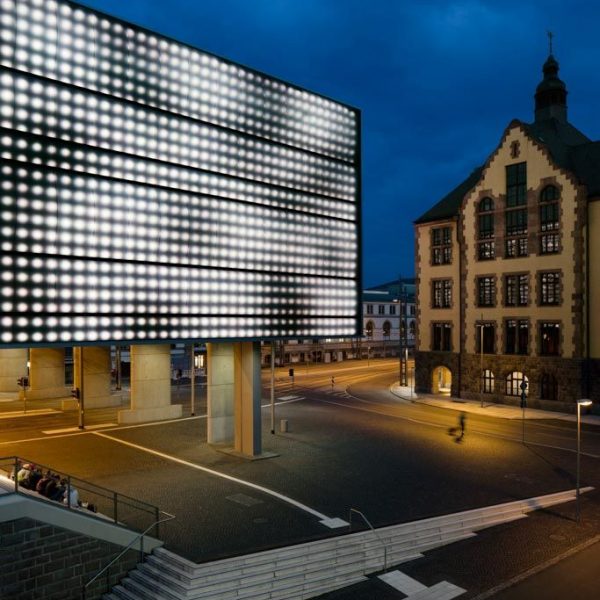 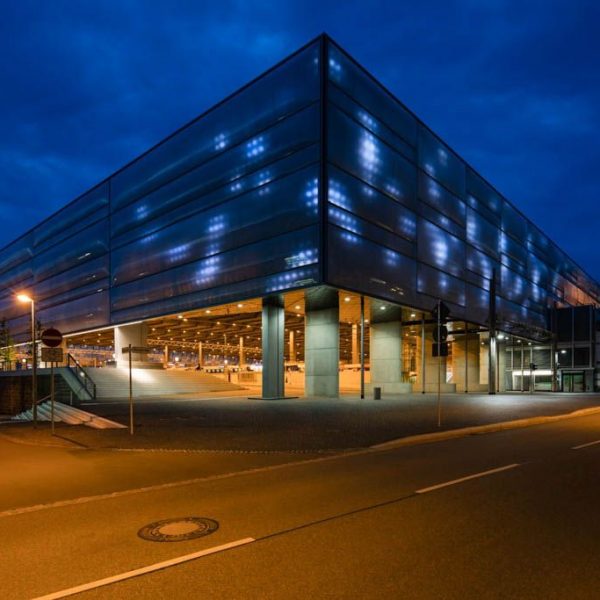 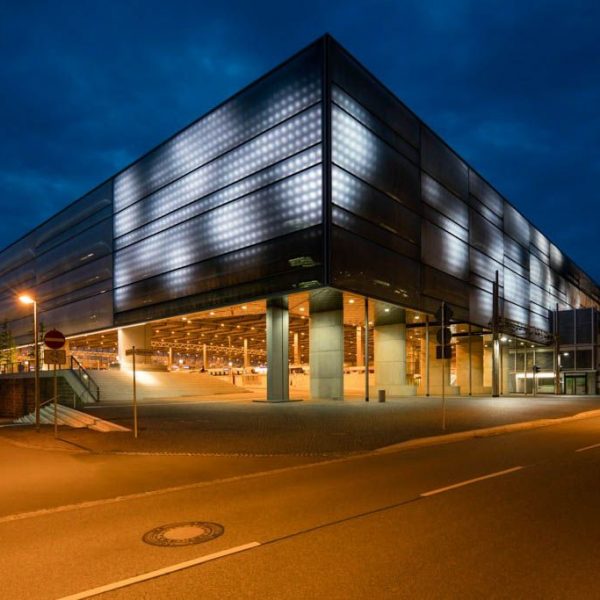 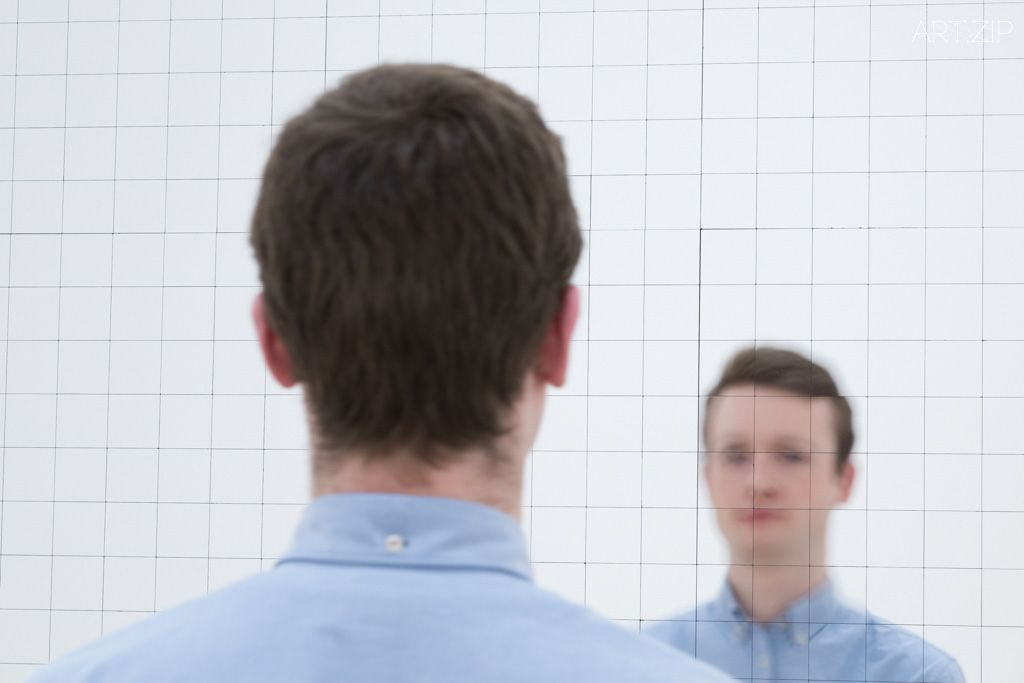