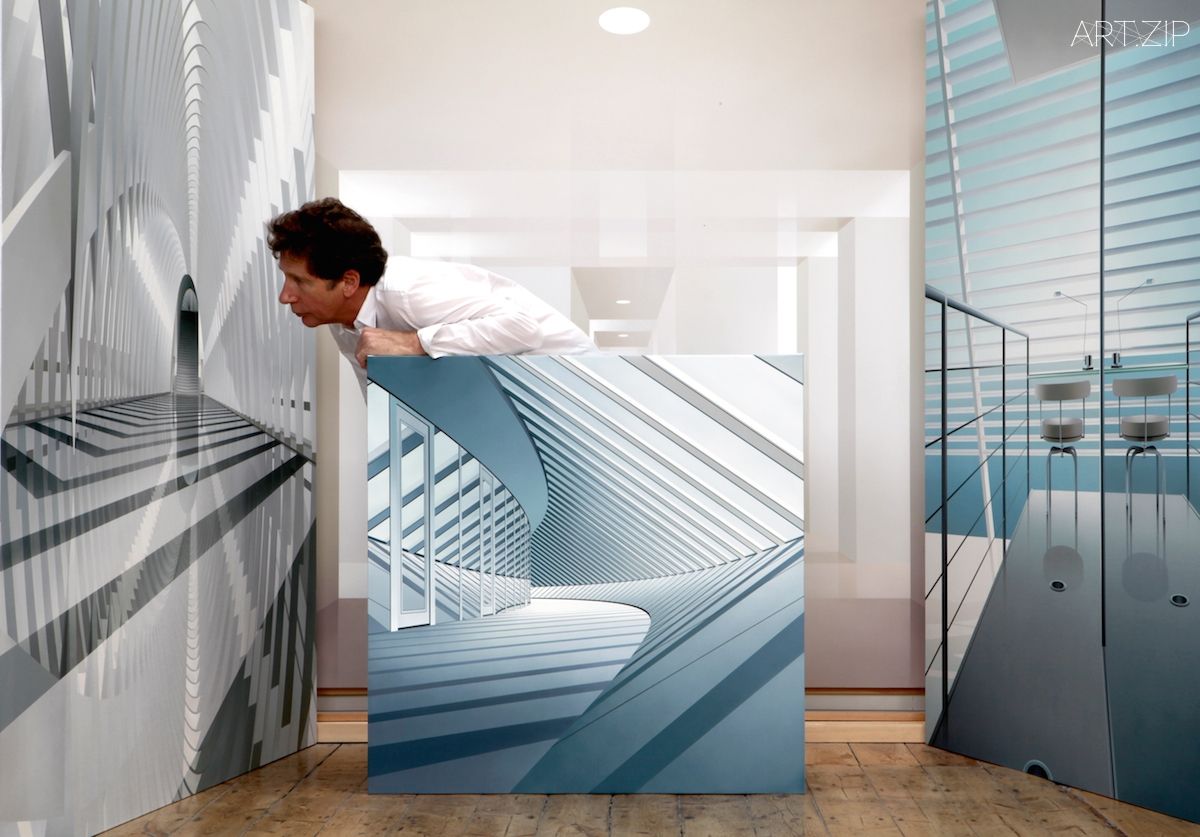 ART.ZIP: So to return to the question, what do you think is the relationship between your studio, your life and your work?

BJ: My life really is my work and my studio is where I can make the work and because I am craft-based rather than conceptually based, I do need the space for certain things. We have a bank of computers because all the drawings are made on computer and for the storage of all of my photographs – my sketchbooks are a camera and a photographic archive. Then I have a compressor here and I have another compressor downstairs, and I also have a very large machine for cutting stencils – because everything is done using stencils. So I need quite a lot of space. I am very lucky because I found this place and bought it. It was going to be sold very, very cheaply because of the recession in 1990 – but that is the way that I have bought all my studios. I have not rented a studio for over forty years. I used to rent.

I worked in somebody’s back bedroom for six months, I worked in somebody’s garage with a roof that sloped down a meter at one end and two meters at the other, so I had to bend down to paint on the left. I then worked in a derelict house someone was waiting to sell where there were rats and no water. I then worked in a stable where a horse had been and the only place that was vaguely warm was up a ladder, but it had no lavatory, so I had to have a bucket! Then I also had to have a bucket of water for mixing the paint, but in the winter it was so cold and so damp that the paint wouldn’t dry and the only way to heat it was a paraffin heater and paraffin heaters throw out huge amounts of water, so the walls were just running with water and condensation. I used to have to go home and sit in a bath for an hour just to get warm again.

It was six meters by six meters and on one and a half floors with a courtyard and I could keep my bees in the courtyard. I used to leave the big doors open and the bees would come in the studio and fly around and then fly out and go in the hive. I lived just across the road from it. Then in 1995 I wanted to start making these large cityscapes, so I bought this studio where we are talking now. I wanted the cityscapes to be for the people. I was even thinking of putting a hole on this front wall so people walking past could look in and see how the painting was going, rather like you do with a building site – just a small window. But I didn’t do that. This studio was initially to make my cityscapes and the plan was always to go back to the smaller studio when I started making smaller, more intimate, personal paintings again. The one thing that my wife said to me was, now you’ve got a bigger studio don’t start making bigger work, and I said, I won’t! Of course I won’t! But of course, when you have a bigger studio, you make bigger work, but it means that very few people can house my paintings.

So what do I think about the space? The space has just got to be practical, but sometimes if you are lucky enough or you spend a long time looking, you do find a space that has some magic to it, although I do believe you can make the magic in a place. You can change the whole atmosphere by good acts, by getting good vibrations into a building, but some buildings just naturally feel right and for me, this just felt right. It was all about working – because these buildings were originally used by builders’ merchants. This building was wash basins and sinks and chimney pots, next door, Peter Blake’s, was paint and glass and Paul Huxley’s building opposite was hardware, hinges, nails, door fittings and then the courtyard was always shared and Peter has a little room in his studio which was for the horse to do the deliveries. They have got marks on the wall showing the horse’s height as it grew – this was its height after one year, two years, three years, fours years. It was the first builders’ merchants in Hammersmith in 1890 and we have a tunnel which goes under the courtyard, through Peter’s studio, right the way down to the river. When the builders were working on the courtyard, the courtyard collapsed and they fell into a tunnel and then they could go down the tunnel, which is an old brick tunnel and they realised they used to unload bricks there delivered by river. So this has always been a place for working people.